America’s earliest cities grew up next to the rivers and oceans that connected them to each other and to world trade routes. Small colonial outposts expanded into major centers of population, commerce, manufacturing, and culture based on their ties to this natural transportation network. In the 19th and early 20th centuries, railroads, canals, and road systems brought prosperity to landlocked cities. Still, the country’s largest cities remained those along the water. New York City in the 1920s demonstrated the nation’s continued reliance on maritime commerce. Bordering one of the finest natural harbors in the world, the city handled almost half of America’s international trade. People, agricultural products, raw materials, and manufactured goods of all kinds came and went through its giant waterfront railroad terminals, conveyed in thousands of ships dispatched by more than 200 shipping companies. The sea-lanes of New York served the needs of the city and those of the nation as well. 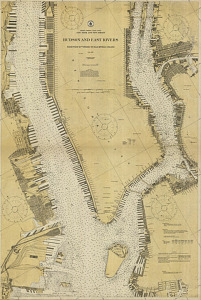 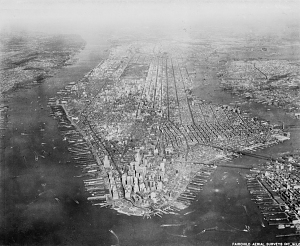 New York in the 1920s had nearly 6 million residents and was a center of manufacturing, commerce, and culture. Immigrants entering through the port and migrants coming by road and rail fed the city’s thriving economy. In 1923 New York produced 1/12th of all manufacturing in the nation.

As part of the great migration of African Americans from the South to northern cities, some 200,000 African Americans moved to New York between 1917 and 1925. In addition to the lure of jobs, many were drawn to the cultural life of Harlem, on the city’s east side.

Almost everyone who crossed the Atlantic Ocean in the 1920s did so by steamship. Businessmen meeting overseas clients, entertainers on tour, and travelers making leisure trips booked passage on ocean liners of all sizes. They sailed alongside vast numbers of emigrants coming to the United States and immigrants returning abroad. The Leviathan and its crew of 1,100 ferried as many as 3,400 passengers to or from New York City each week. German-built in 1914 but used as an American troopship during World War I, the Leviathan was the largest American merchant ship of its day. 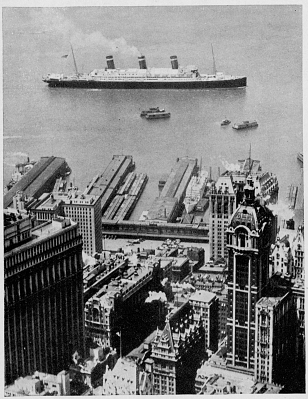 The Leviathan in New York, about 1925 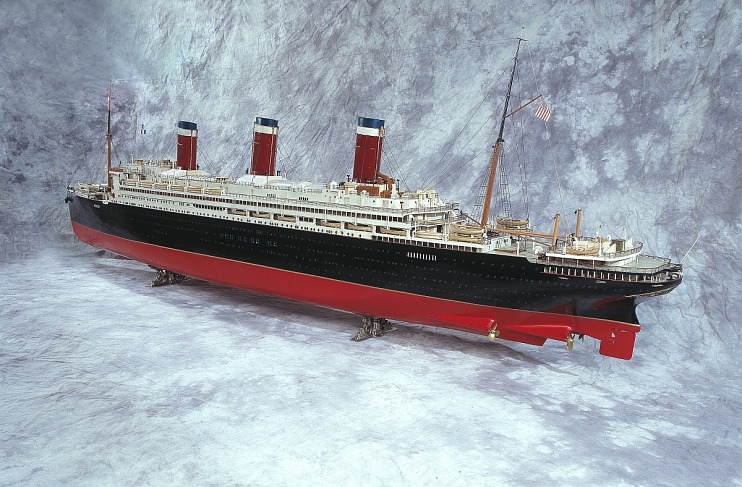 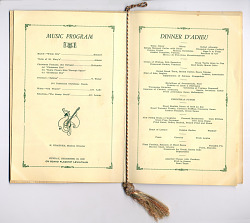 This combined Dinner Menu and Music Program was given to the First Class passengers who were traveling aboard the Leviathan on Sunday, December 22, 1929.

For more stories and objects from the S. S. Leviathan, visit the Object Group.

The Graf Zeppelin over Manhattan, 1928

Courtesy of National Air and Space Museum Archives
Air travel, still highly experimental, captured America’s imagination during the 1920s. It promised to speed communication and commerce among peoples and nations. At a time when ocean liners symbolized modernity, wealth, and national pride, it was exciting to think that giant and graceful airships might one day replace their ocean rivals. The German dirigible Graf Zeppelin inaugurated the first commercial passenger service across the Atlantic by air in October 1928. It carried 20 passengers at a time, with a crew of 43. To learn more about early aviation, visit the Smithsonian’s National Air and Space Museum.

Although the United States began to restrict immigration in 1924, 1920s New York was still a city with a large immigrant population. Foreign-born residents played a crucial part in the city’s economic, social, and cultural life. At a time when America’s ready-made clothing industry was centered in New York, immigrants provided much of the labor that made the nation’s suits, coats, and dresses. 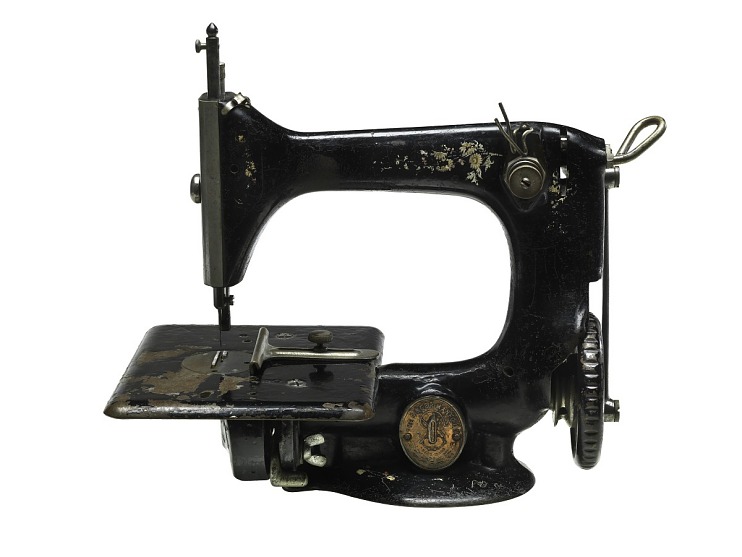 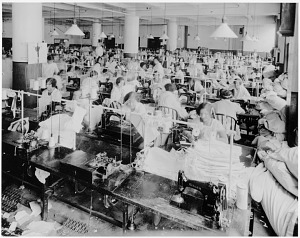 In the 1920s many African American artists and performers were drawn to New York to take part in Harlem’s dynamic jazz and blues music scene. One such migrant was Georgia native Fletcher Henderson, who led the most successful African American jazz band in the decade. Other musical talents who made New York home in the twenties were Coleman Hawkins (from Kansas City), “Duke” Ellington (Washington, DC), “King” Oliver, “Jelly Roll” Morton, Louis Armstrong (New Orleans), and Bessie Smith (Chattanooga). With its southern roots, jazz became a powerful expression of New York’s cultural life and was exported through recordings, radio broadcasts, and live performances abroad. 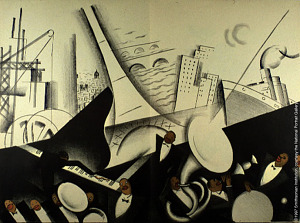 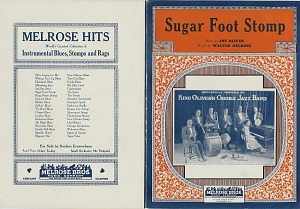 By the 1920s, waterborne traffic in New York Harbor involved hundreds of vessels and tens of thousands of people a day. Their safe passage depended on maintenance of the harbor’s aids to navigation. This was the job of the crew aboard the U.S. Lighthouse Service tender Oak, whose engine room is seen below.

The Oak’s home port was Staten Island. Its 4 officers and 23 crew provided supplies, fuel, mail, and transportation to area lighthouses and lightships. They also positioned, painted, and serviced the harbor’s network of buoys, fog signals, and beacons. 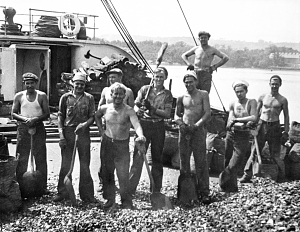 Crew members aboard the buoy tender Oak shoveled a lot of coal. Not only did they have to feed the engine’s coal-fired boilers, they also delivered coal to lighthouses and lightships. 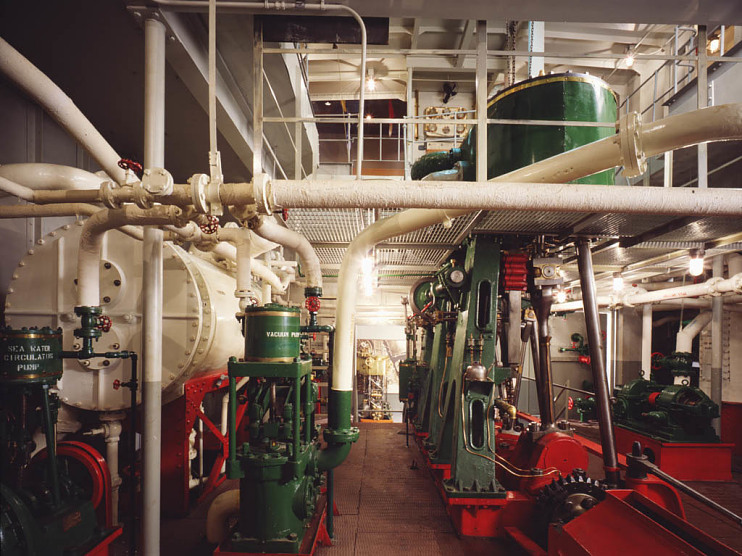 The engine room is from the U.S. Lighthouse Service (later U.S. Coast Guard) buoy tender Oak. The 750-horsepower, triple-expansion steam engine was installed in the ship when it was built in 1921.

New York Harbor has long been one of the busiest in the world. In 1920, oceangoing steamers entered or left the port about every 20 minutes. Coastal freighters, harbor tugs, river steamers, and other ships shared the water and the piers that lined Lower Manhattan, Brooklyn, Staten Island, and the New Jersey banks of the Hudson River. The ship models displayed here represent vessels that were part of New York’s busy harbor traffic in the 1920s. 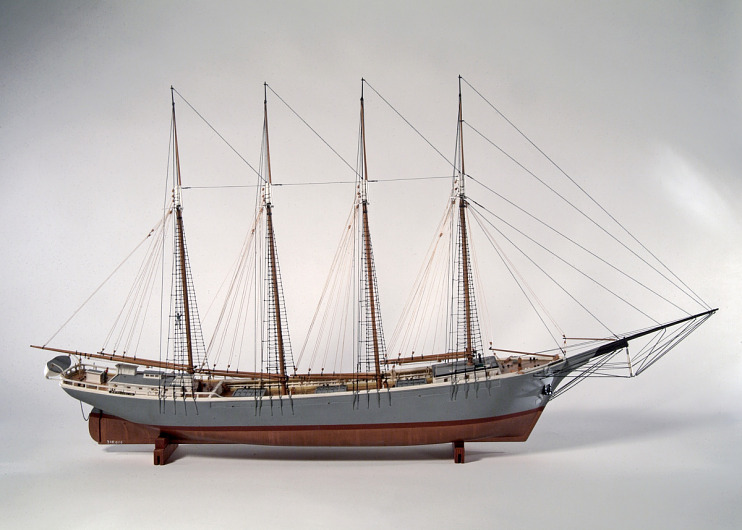 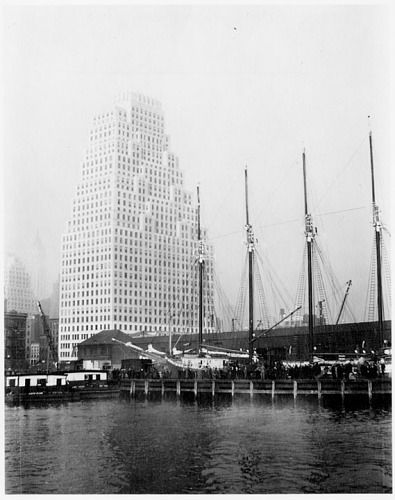 The schooner R. R. Govin, still operating in 1933, dwarfed by a new skyscraper at 120 Wall Street.

Courtesy of South Street Seaport Museum
Large wooden schooners were the primary carriers of bulk cargos--coal, lumber, stone, ice--at the end of the 19th century. By the 1920s, steamers had taken over most of this trade. Among the schooners still working was the C. C. Mengel Jr., which operated out of New York between 1919 and 1921. With a crew of eight, it carried lumber, clay, pilings, gypsum, barrel staves, and asphalt among ports from Nova Scotia to Ireland to the West Indies. It was wrecked in 1922. 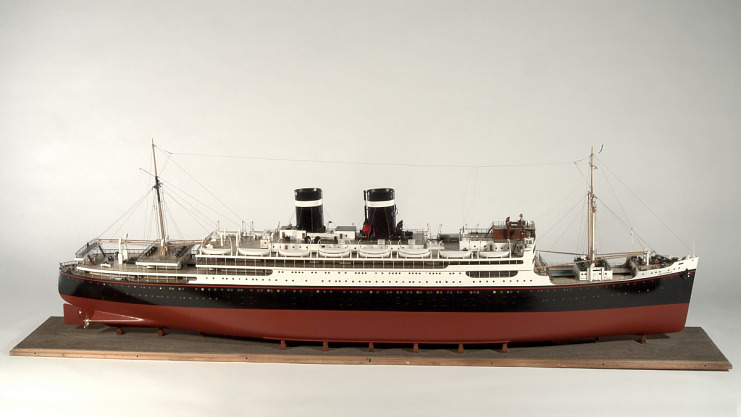 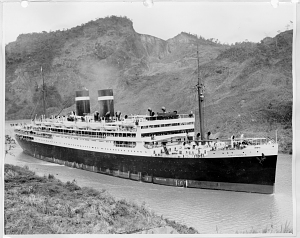 The California steaming through the Panama Canal, about 1930

New York was connected to California by water as well as by railroad. The California was the first passenger ship specifically built to sail between the East and West coasts through the Panama Canal, which opened in 1914. In a leisurely 13 days, the California and its crew of 351 carried 751 passengers from New York to San Francisco, calling at Havana, Cuba; Balboa, Panama; San Diego; and Los Angeles. 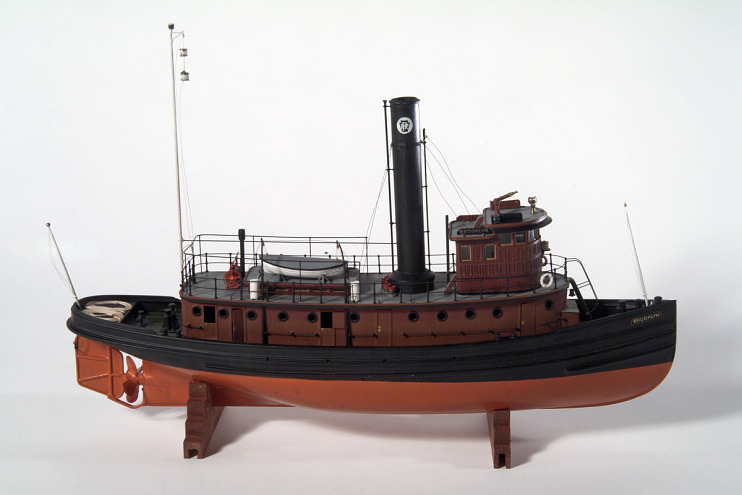 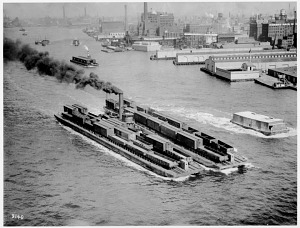 Courtesy of Levick Collection, the Mariners' Museum, Newport News, Va.
New York’s tugboats maneuvered large oceangoing vessels through the hazards of confined docks, and towed barges and scows across the harbor. The railroads owned dozens, boats like the Pennsylvania Railroad’s Brooklyn, which shepherded floats of boxcars from New Jersey rail yards to freight terminals in Manhattan.

What Happened to New York? 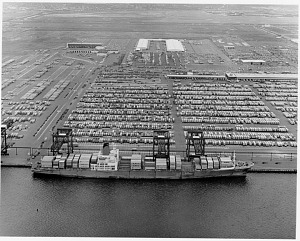 America has been involved in global trade since colonial times. In the first half of the 19th century, the United States exported raw materials and imported manufactured goods. As the country industrialized, it became a major exporter of factory-produced items, from sewing machines to cars. In recent years, it has again imported manufactured goods, and exported agricultural products and financial and computer-related services. The United States has been a major player in international economy since the 1880s. New York City has been central to the story of America’s international trade. In the 1920s, half of America’s imports and exports moved through the city. But New York’s role as a port began declining in the 1960s as container ships moved to terminals elsewhere in the area, and New York’s transportation problems made it harder to get trucks and trains from the ports out of the city. Ocean liners no longer carried millions of immigrants to New York. Manufacturers moved out of the city, looking for cheaper labor. But New York reinvented itself as a new kind of global city. More than ever, it is a center of international finance, banking, art, culture, and professional services. The new New York is a city tied to the world economy not only by the goods it manufactures, buys, sells, and transports, but also by the ideas, culture, and financial and information services it produces.

‹ A Streetcar City up Crossing the Country ›