The idea of driving across the country captured the imagination of millions of Americans. Even before roads stretched across the nation, well-publicized cross-country automobile trips advertised car manufacturers, promoted political causes, and proved that the automobile could be more than an expensive toy. Long-distance road trips and other publicity stunts helped establish the automobile in Americans’ consciousness long before cars became commonplace. In 1903, H. Nelson Jackson, Sewall Crocker, and their dog Bud made the first successful transcontinental automobile trip. The journey was arduous and slow, but their trip made headlines wherever they went. They helped prove that long-distance road travel was a real—if expensive and difficult—possibility.

First to Drive across the Continent

Driving an automobile from coast to coast in 1903 was a difficult and daring achievement. H. Nelson Jackson, a physician and businessman from Burlington, Vermont, captured the nation’s attention when he and Sewall K. Crocker, a mechanic, drove from California to New York. Despite mud, washouts, breakdowns, and a lack of roads and bridges in the West, they finished their trip in 63 days. Two other motoring parties—each anxious to claim the title of first to drive across country—departed while Jackson and Crocker were en route, but could not overtake them. The trip began after a discussion in a San Francisco men’s club as to the feasibility of a transcontinental auto crossing. Jackson decided to give it a try. He purchased a 1903 Winton touring car, named it “Vermont,” and headed east. Jackson and Crocker followed trails, rivers, mountain passes, alkali flats, and the Union Pacific Railroad across the West. After 63 days on the road, the expedition reached New York. Jackson had spent $8,000 on the trip, including hotel rooms, gasoline, tires, parts, supplies, food, and the cost of the Winton. 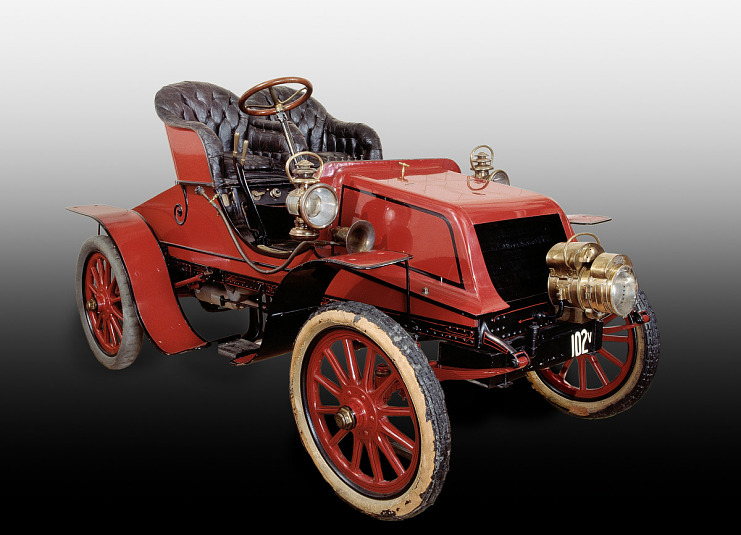 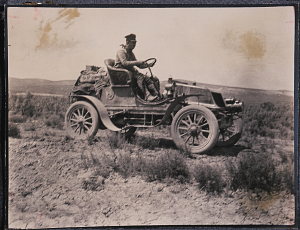 Way out West: H. Nelson Jackson at the wheel of his Winton

Courtesy of University of Vermont, Special Collections
In 1903, H. Nelson Jackson and Sewall K. Crocker completed the first motor trip across the United States in this car, which Jackson named for his home state. It is displayed with reproductions of supplies and equipment that the men carried. They often used a block and tackle to pull the car out of mudholes. When the Winton needed repairs, they telegraphed the factory for parts and awaited delivery by railroad. 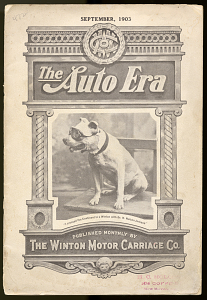 The Winton Motor Carriage Company published details about the Jackson-Crocker cross-country trip and emphasized the car’s ruggedness and reliability. Bud, a bulldog, accompanied the drivers, and was featured in many news photos. 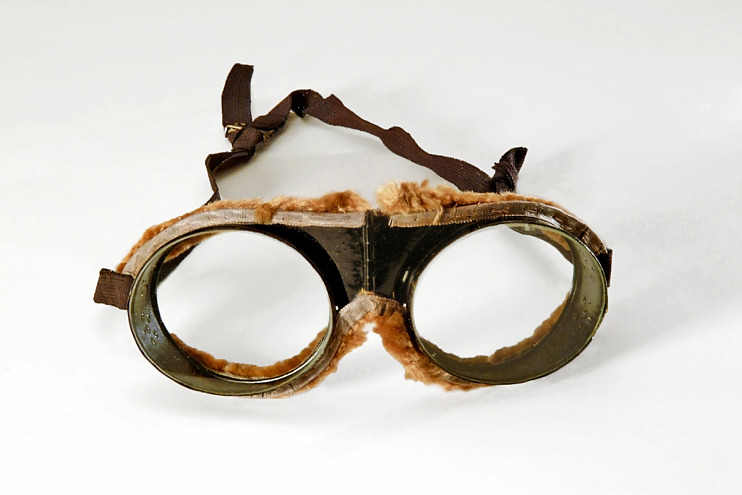 In Idaho, Jackson acquired Bud, and the bulldog accompanied the pioneering motorists to the East Coast. Churning dust irritated Bud’s eyes, and Jackson purchased this pair of goggles for him.

H. Nelson Jackson’s trip in 1903 inspired dozens of motorists to cross the country. In 1909, Alice Huyler Ramsey, of Hackensack, New Jersey, became the first woman to drive across the United States. Challenged by a sales manager for Maxwell automobiles, she drove a Maxwell touring car from New York to San Francisco in 59 days. Like Jackson, Ramsey and her three female passengers packed a block and tackle and used it often in the muddy Midwest. Between 1909 and 1975, Ramsey drove across the country more than 30 times. 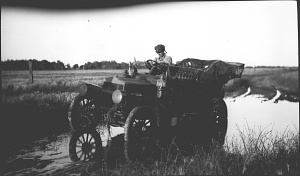 Pulling the car out

Courtesy of Peter Ramsey
Western roads were still unimproved in 1909 when Alice Huyler Ramsey drove across the country. She extracted the Maxwell from washouts and mudholes with block and tackle, a jack, even fence rails under the wheels. Occasionally horses and cars gave her a tow. 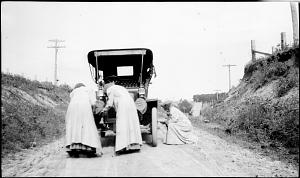 Alice Ramsey and her fellow travelers

Courtesy of Peter Ramsey
Ramsey’s sisters-in-law and a friend accompanied her on the trip from New York to San Francisco. Here they prepare to light the acetylene gas headlamps.

At a time when few women owned or drove cars, taking the wheel was a powerful symbolic act. In 1916, suffragists Nell Richardson and Alice Burke, with their cat Saxon, drove across and around the country to drum up support for voting rights for women. Their yellow Saxon automobile, nicknamed the “Golden Flier,” became a moving symbol of women’s rights and a podium for speeches in many towns and cities. Sponsored by the National American Woman Suffrage Association, the trip began and ended in New York City. It took five months, and covered more than 10,000 miles. 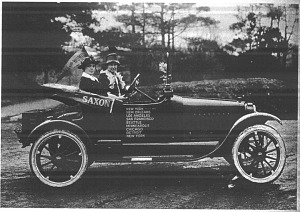 Courtesy of American Automobile Manufacturers Association
As Burke and Richardson drove around the country, overcoming the challenges of rough roads and mechanical breakdowns, they showed that women could be at home in the “masculine” domain of machines.
‹ The Connected City up Americans Adopt the Auto ›