Precision farming has made farms more efficient, competitive, and environmentally friendly. Meet some of the farmer who use precision farming technology every day, and inventors that made it possible. 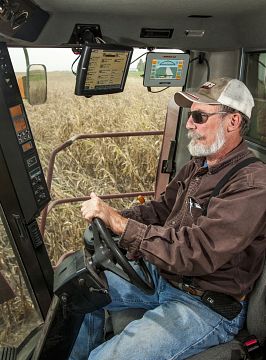 Courtesy of the National Air and Space Museum. 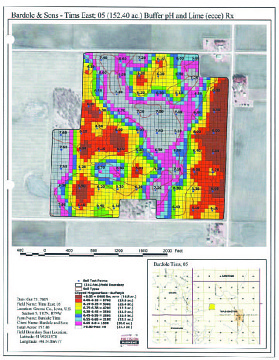 Colorful maps show farmers how their harvest differs from one part of the field to another.

Roy Bardole, a third-generation famer growing corn and soybeans in Rippey, Iowa, was an early adopter of precision farming. GPS equipment, crop yield monitors, and other devices turned his combine cab into an information control center. Bardole’s first precision farming purchase was auto-steer for his tractor and combine. The GPS-enabled technology reduced fatigue and kept rows straighter. His combine has a yield monitor and a GPS receiver so that he can record exactly which portion of the field is most productive. 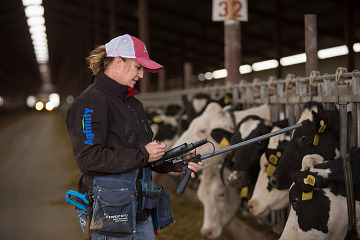 Courtesy of Dairy Farmers of America. 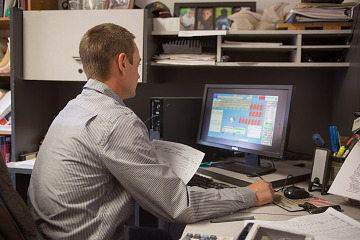 Courtesy of Dairy Farmers of America

Dairy farmer Kim Burnett of Carpenter, Wyoming is committed to precision farming. At Burnett Enterprises (owned and operated by brothers Jeff and Jay Burnett and their wives Kim and Lisa), every cow wears a computer chip on its neck with a number. The computer records how much milk each cow produces at every milking. Animal health is critical in a dairy. The computer system allows the Burnetts to run reports on cows that are dropping in production, identify cows that need checking for health issues, and find cows being milked in the incorrect pen.
Adopting precision herd management, according to dairy farmer Jay Burnett, is an economic necessity — “Average goes broke. . . . You are going to have to be in the top percentile to be successful.” 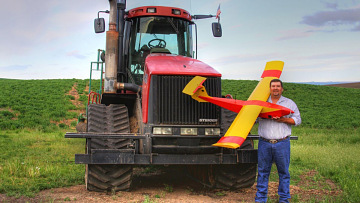 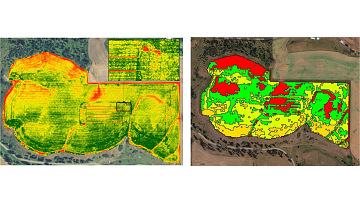 Blair uses maps like these to determine what areas need more fertilizer.

Wheat farmer Robert Blair of Kendrick, Idaho uses drones, GPS equipment, crop yield monitors, and other devices to create a new way of seeing and managing his fields. Using an unmanned aerial vehicle (UAV or drone), Blair keeps better tabs on changing conditions throughout his farm. From a drone, Blair can take GPS-indexed near-infrared photos of plants in his fields. Using these colorful images, he can determine what areas need more nitrogen fertilizer—allowing Blair to save money and avoid environmentally harmful over-fertilization. 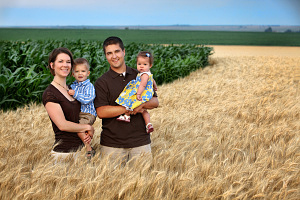 Corn and soybean farmers Zach and Anna Hunnicutt and their children in Giltner, Nebraska. 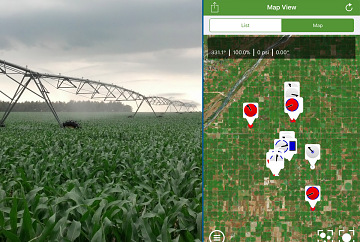 Hunnicutt uses field moisture sensors and a computer control to determine the control of the irrigation system. This data helps conserve water, only using the amount needed to turn the dry Nebraska plain in productive farm fields. 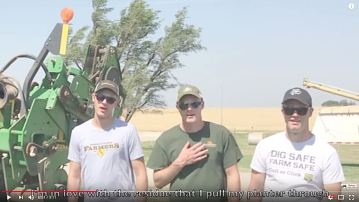 Siblings Greg, Nathan, Kendal, and Laura Peterson work on a fifth-generation farm near Assaria, Kanas and run a YouTube channel featuring parody videos in which they sing about their work as farmers to the tune of pop hits. “There are many misconceptions about modern day farmers and we feel it is our calling to help correct some of those misconceptions,” the siblings explain on their website.