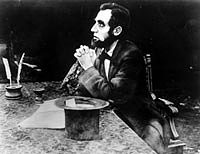 Depiction of Abraham Lincoln in Birth of a Nation, 1915
Courtesy of Movie Still Archives

The presidency has been an element of feature films from the beginning, although movies depicting actual presidents have rarely been box-office successes. Early silent films included Lincoln, the Lover (1914) and The Birth of a Nation (1915). Some films have sought to glorify--Young Mr. Lincoln, starring Henry Fonda, Sunrise at Campobello, PT 109; others explored the ambiguity of the office--Seven Days in May, Nixon, and Dr. Strangelove. More recent movies, like Air Force One, Deep Impact, and The American President, turned the president into an action hero, a romantic leading man, or a symbol of all that is right--or wrong--in America.

Television has treated the executive office with less reverence. In the early years, programs like Producer's Showcase and Philco Playhouse began to examine the American political system. By the 1970s, several depictions of the presidency attempted to demystify and to explain, including Eleanor and Franklin, Collision Course, and The Missiles of October. More recently, NBC's The West Wing tried to both entertain and educate its viewers about life in a working White House. And Saturday Night Live has lampooned the presidency for decades. Today's shows strive for a better-rounded, less heroic picture of the president.

Harrison Ford as president in Air Force One, a 1997 movie about a heroic chief executive who singlehandedly defeats terrorists highjacking the presidential airplane.
Courtesy of Movie Still Archives

Polly Bergen as president in Kisses For My President. This 1964 Warner Brothers feature stars Bergen as the first woman to serve as president, and Fred MacMurray as her husband. Bergen is so overwhelmed by the strains of the job that, when she discovers she is pregnant, she happily resigns. Kisses for My President clearly reflects many of the attitudes that shaped women's lives in the early 1960s.
Courtesy of Movie Still Archives 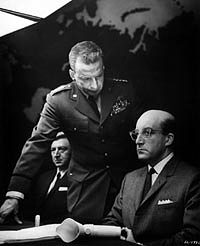 Peter Sellers as president in Dr. Strangelove. Sellers leads a strong ensemble cast in this 1964 movie directed by Stanley Kubrick. Called the "first nuclear comedy," the film broke the mold of depicting the American president in a heroic manner. Here, the fictional president is ripe with indecision.
Courtesy of Movie Still Archives

Ralph Bellamy as Franklin D. Roosevelt in Sunrise at Campobello. Released in 1960, this film is significant for its candid depiction of Roosevelt's struggle in the 1920s to overcome polio so that he might resume his political career.
Courtesy of Movie Still Archives

Jack Nicholson as president in Mars Attacks!, a 1996 farce in which Earth is invaded by Martians with a cruel sense of humor.
Courtesy of Movie Still Archives 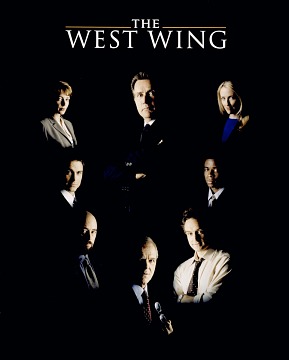 Martin Sheen as the fictional President Josiah Bartlet on The West Wing, a drama that ran seven seasons on NBC, 1999 to 2006. This promotional poster features Bartlet and the central members of his staff.

‹ Political Cartoons up Music and Performance ›