View object record
1977 guide reflects the increasing importance of TV to presidential success
View object record
If it were not for the reporters, I would tell you the truth.
–President Chester A. Arthur, 1881

The ability to communicate effectively and efficiently to the American public is one hallmark of a successful presidency. Mastering the media of the period, whether newspapers, newsreels, radio, television, or even the internet, is crucial to a president's capacity to excite people and convey the hopes and aspirations of his administration.

For some, the challenge of keeping up with the technological changes and demands in various media greatly limited their presidencies. Others achieved much politically because of their proficiency. Franklin Roosevelt, for instance, used the radio masterfully to speak directly to the American people, and Ronald Reagan's ease with television earned him the nickname "the Great Communicator." 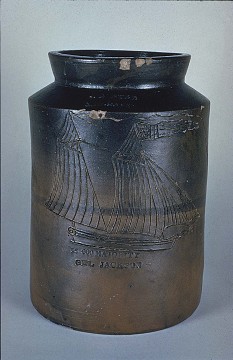 The jar protests the 1824 election results, which gave the presidency to John Quincy Adams even though Andrew Jackson won a plurality of popular votes in the four-way race. That election sparked a revolution in the American party system and reform of the electoral process. 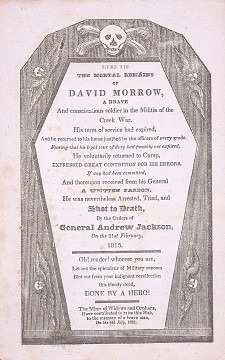 This 1828 broadside is among the most dramatic of many printed devices that criticized the presidential ambitions and administration of Andrew Jackson. Using the striking silhouette of a coffin to represent his supposed victims, it accuses Jackson of executing militiamen under his command during the War of 1812. Despite the forceful imagery, Jackson remained powerful and popular throughout his presidency.

Broadsides containing printed information were freely distributed or mounted on walls. They were an important communication tool for American presidents well into the 1800s.

James K. Polk (1845-1849) was the first presidential candidate whose nomination was telegraphed, from Baltimore to Washington, D.C., in May 1844.

William McKinley (1897-1901) was the first chief executive to appear on a newsreel while president.

Franklin D. Roosevelt (1933-1945) was the first chief executive to appear on television as president, at the opening of the New York City World's Fair in 1939.

‹ Communicating the Presidency up Print ›