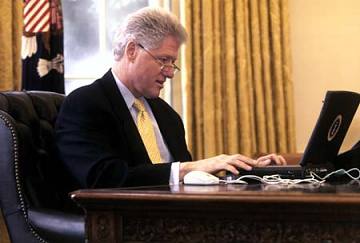 President Clinton at the computer.
Courtesy of the White House

With the development of the internet, email, and social media, residents of the White House, along with the rest of the country, have explored what the digital world means, how best to use it, and what effect it can have. Bill Clinton was the first president with the opportunity to make effective use of the internet and was the first president to send an email. The White House Facebook account went live under Barack Obama and Donald Trump was active on Twitter.

Questions continue to be asked about the role new communication platforms have played with respect to creating a sense of community or a division of interests. How has the expansion of high-speed internet access affected the presidency? Has it usurped the functions traditionally monopolized by television, just as television replaced radio as the focus of attention in the home? What will the next technology be that influences presidential communication?