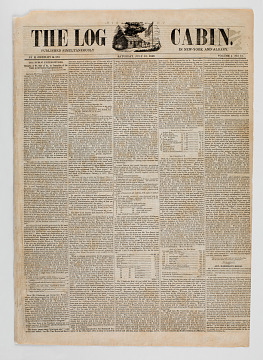 Newspapers were the dominant form of mass communication used by American presidents into the early 1900s. They disseminated ideas and projected images of a party, a candidate, and a chief executive. Along with almanacs and political biographies, they were a common means of conveying a president's message and maintaining support for the party's issues and leadership.

Political parties published their own partisan papers, a practice that began with the rivalry between Federalists and Jeffersonian Democratic-Republicans in the early 1800s. The tradition slowly faded throughout the century.

The Log Cabin, edited by Horace Greeley, was the leading campaign newspaper of 1840, with a circulation of 80,000. It took its title and masthead imagery from the first comprehensively merchandised symbol in American politics. The paper provided entertaining news as well as reports on the speeches and policies of soon-to-be president William Henry Harrison. Within a year, Greeley transformed the Log Cabin into the New York Tribune.

By the early 1900s, print had been harnessed as a medium of mass communication. Political leaders adopted commercial techniques that enabled them to connect effectively with an ever-growing American population. 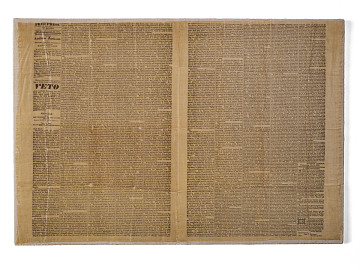 View object record
View object record
Silk copy of Andrew Jackson’s Veto Message as printed in the St. Louis Free Press
On July 10, 1832, President Jackson rejected the rechartering the Bank of the United States. Not delivered before an audience, his veto message was published in papers across the country and sometimes reprinted on fabric.
‹ The President Communicates up Stump Speeches ›