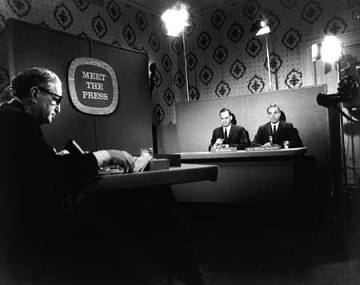 Lawrence Spivak (left), host of Meet the Press, and program participants, 1964
Courtesy of Library of Congress

By the 1950s, presidents realized that much of their time and money should be spent on television. Dwight D. Eisenhower became the first presidential candidate to appear in a television campaign commercial, in 1952. His unorthodox decision surprised many, but the power of television was soon apparent.

Since then, television has been the dominant medium for the expression of presidential leadership. Manufacturing an effective presidential image today requires the use of newspapers and news magazines, talk radio, and more recent technologies such as the internet. However, the prevailing standard of communication, appearance, and performance is still defined by television. 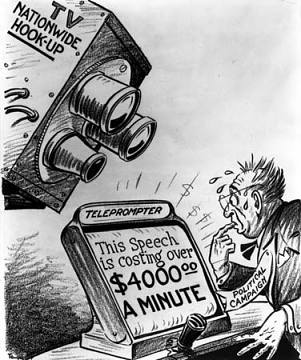 Cartoon, "This Speech is costing over $4000 a minute"
By the 1950s, it became necessary for political parties to acquaint presidents and presidential hopefuls with the importance of their television appearance and how to conduct themselves on the medium.
Courtesy of Library of Congress 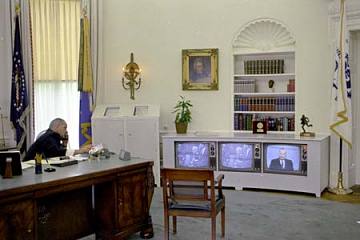 Television monitors
To monitor the nightly newscasts of the three major networks--NBC, CBS, and ABC--President Lyndon Johnson had a special console of three televisions installed in the Oval Office.
Courtesy of Lyndon Baines Johnson Library 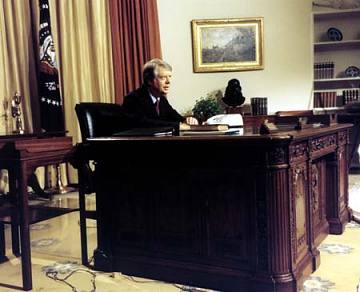 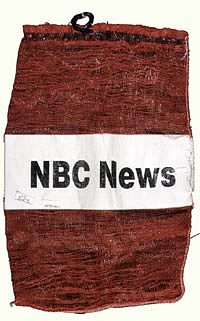 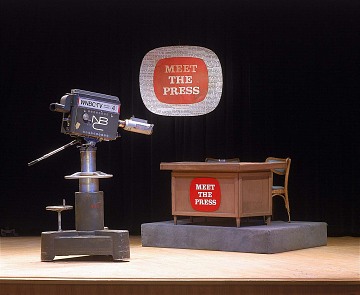 In its earliest guise, the program's half-hour format featured Spivak as moderator and sometime panelist, a panel of four Washington journalists, and a guest. Today it is more of a conversation than an unrehearsed press conference.

The moderator's desk and chair and the signage date to 1975, the year Spivak retired from the program.