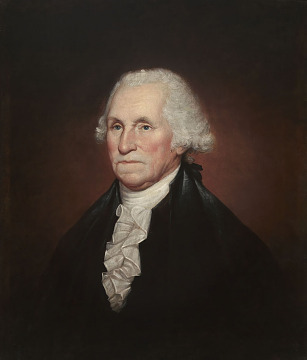 Portrait of George Washington by Rembrandt Peale, 1795
Courtesy of National Portrait Gallery
[Presidential powers would not] have been so great had not many of the members cast their eyes toward General Washington as President; and shaped their ideas of the Powers to be given to a President, by their opinions of his Virtue.
– Constitutional Convention delegate Pierce Butler (South Carolina)

After the war for independence, George Washington was the best known and most respected of all the revolutionary leaders. Elected to preside over the Constitutional Convention, he helped to legitimize the proceeding and encourage the Constitution's acceptance.

There was little doubt among the delegates that the office of the presidency they were creating would be filled first by General Washington. His reputation was beyond reproach and his mere presence during the debates eased the fears of many delegates that a strong executive would not naturally evolve into a monarchy. 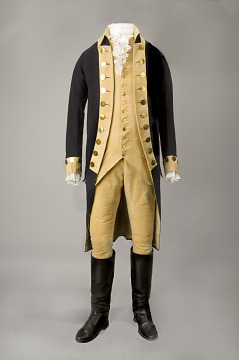 The ruffled shirt, neckcloth, and boots are reproductions.

‹ Constitutional Convention up Establishing the Presidency ›