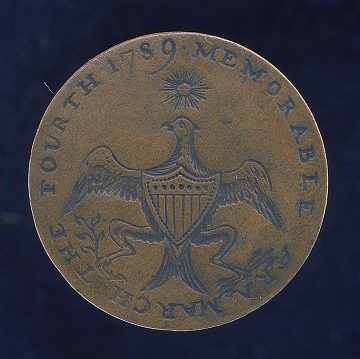 Commemorative clothing button made for Washington's first inauguration
Courtesy of Ralph E. Becker Collection of Political Americana
In our progress towards political happiness my station is new; and if I may use the expression, I walk on untrodden ground.
–George Washington, January 1790

Participants in the new government knew they were establishing models for the future, and no one was more conscious of this responsibility than the first president.

Always aware of symbolism, George Washington struck a careful balance between acting too regal or too egalitarian. He chose to be addressed simply as "Mr. President," yet bowed to guests rather than extending a personal handshake.

Most important, Washington established the presidency as the central power of the executive branch. He carefully maintained the dominance of the office, never ceding its authority to his cabinet secretaries, never granting its powers to the other branches of government. 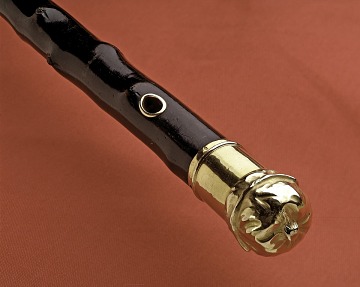 Benjamin Franklin bequeathed his crab-tree walking stick to Washington, writing in his will, "To my friend, and the friend of mankind, General Washington. If it were a Sceptre, he has merited it, and would become it." Washington lent his considerable reputation to the office of the presidency; in doing so, he elevated the position to one of significant prestige and power.

While others had great confidence in George Washington's ability to assume the position of president, Washington himself was not as sure. He wrote to Henry Knox (who would become the first Secretary of War): "...my movements to the chair of Government will be accompanied with feelings not unlike those of a culprit who is going to the place of his execution: so unwilling am I, in the evening of a life nearly consumed in public cares, to quit a peaceful abode for an Ocean of difficulties, without that competency of political skill--abilities & inclination which is necessary to manage the helm." 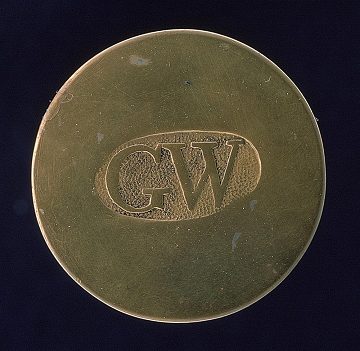 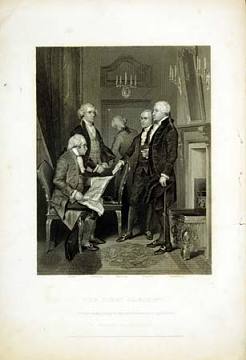 Washington's First Cabinet
The executive branch began modestly with regular conferences between George Washington and his four executive secretaries. These meetings eventually evolved into a standing cabinet, a body not specified in the Constitution; yet once established, it became a permanent feature of the executive branch. This engraving of the first cabinet was done from an original painting by Alonzo Chappel in 1789.