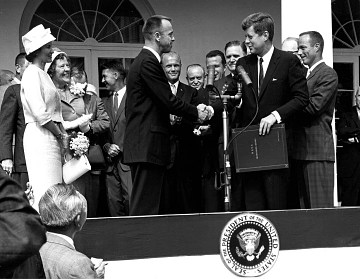 President John F. Kennedy congratulating Alan B. Shepard, Jr. after the astronaut completed America's first manned space mission
Courtesy of National Aeronautics and Space Administration
I believe that this nation should commit itself to achieving the goal, before this decade is out, of landing a man on the Moon and returning him safely to the Earth. No single space project ... will be more exciting, or more impressive to mankind, or more important ... and none will be so difficult or expensive to accomplish.
–John F. Kennedy, May 1961

By the late 1950s the cold war between the United States and the Soviet Union included a competitive and strategic race for dominance in space. The Russians, who successfully launched the first satellite in 1957 and the first manned flight in 1961, appeared to be winning the contest. John F. Kennedy sought a bold goal that would inspire and excite the American public, and ensure its commitment to an expensive space program. Buoyed by astronaut Alan Shepard's short space flight in 1961, the president declared before a joint session of Congress the aim of landing a man on the Moon by the end of the decade.