The conservation of natural resources is the fundamental problem. Unless we solve that problem it will avail us little to solve all others.
–Theodore Roosevelt, 1907, addressing the Deep Waterway Convention, Memphis

After the death of his first wife in 1884, Theodore Roosevelt sought the "vast silent spaces" of the Dakota Badlands and the recuperative powers of a strenuous life. He purchased a small ranch and reveled in being a cowboy. Three years later he was ready to resume his political quest in the East.

The experience gave him a love and appreciation of nature that made him champion the conservation movement once he became president. Under his leadership the government transferred 125 million acres of public land into the forest reserves and established sixteen national monuments and fifty-one wildlife refuges. 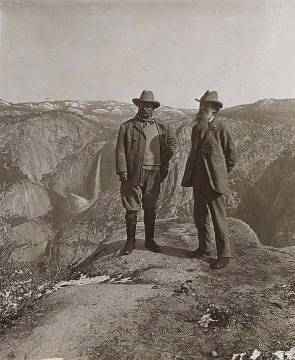