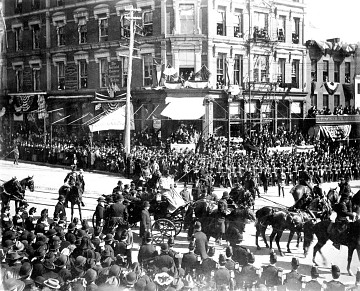 William McKinley and party en route to the swearing-in ceremonies at the Capitol, March 4, 1897
Courtesy of Library of Congress

Presidential inaugurations are public holidays, a time when all Americans can celebrate our democratic customs and creed. There is much to celebrate for, once again, America's political torch has been passed in peace.

Inaugurals have an air of dignity befitting a monarch. At the same time, they reflect our down-to-earth feelings toward politicians. The ceremonies are partly celebrations and partly coronations. Inaugurals promote national unity yet provide an occasion for partisan gloating. They are populist and elitist, public and private, inclusive and exclusive, commercial and civic. But most of all, they reflect the hopes we have for the presidency and our democratic process.

Theodore Roosevelt (1901-1909)
wore a ring to his 1905 inauguration that held a lock of Abraham Lincoln's hair, cut off after Lincoln was shot.

‹ The Press up Oath of Office ›