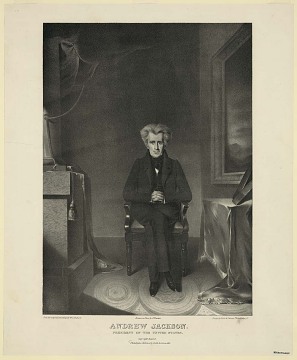 On January 30, 1835, President Andrew Jackson attended a congressional funeral in the Capitol building. As he exited, Richard Lawrence, an unemployed house painter, pointed a pistol at Jackson and fired. The percussion cap exploded, but the bullet did not discharge. The enraged Jackson raised his cane to throttle his attacker, who fired again. The second weapon also misfired and the sixty-seven-year-old president escaped unharmed.

The deranged Lawrence believed Jackson had conspired to keep him poor and out of work. Jackson was convinced that Lawrence was hired by his political enemies, the Whigs, to stop his plan to destroy the Bank of the United States. Lawrence spent the rest of his life in jails and asylums. 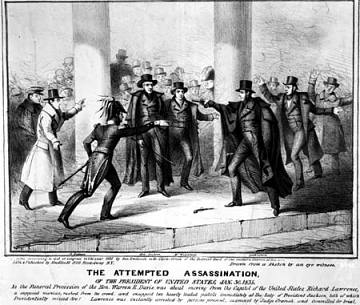 This print of the assassination attempt against Jackson, created twenty years after incident, was made from a sketch by an eyewitness. It became quite popular because it shows the aging president boldly confronting his attacker.
Courtesy of Library of Congress
‹ Assassination Attempts up Theodore Roosevelt ›