After leaving office in 1909, Theodore Roosevelt tried to settle into life as a former president. But, dissatisfied with the actions of his successor, William H. Taft, Roosevelt decided to run again for president in 1912 as the candidate of the Progressive, or "Bull Moose" Party.

Roosevelt was wounded by John Schrank on his way to a campaign appearance at the Milwaukee Auditorium on October 14, 1912, but went on to deliver his speech. Schrank believed he must kill Roosevelt to prevent him from serving three presidential terms, and because he dreamed that Roosevelt was responsible for the assassination of William McKinley. 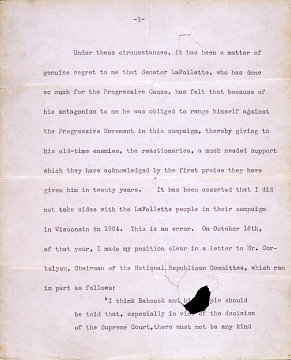 View object record
View object record
First page of Theodore Roosevelt's 1912 speech
Theodore Roosevelt survived an attempted assassination when the bullet was deflected and slowed by a metal eyeglass case and by a folded fifty-page speech. This first page of the address was held aloft for the audience to see the hole caused by the bullet.
‹ Andrew Jackson up The Secret Service ›