The Long and Final Ride 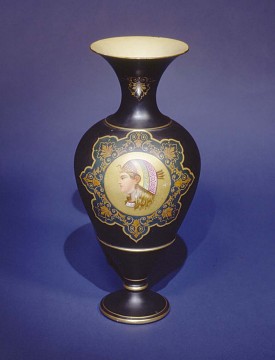 One of two vases placed beside Lincoln's body at his funeral
Now he belongs to the ages.
–Secretary of War Edwin Stanton, April 15, 1865

First Lady Mary Lincoln decided the president should be buried in Springfield, Illinois, his former home. Before leaving Washington on April 21, Abraham Lincoln's body lay in state in the White House. Then, after a two-hour funeral processional that included soldiers, politicians, diplomats, and freed slaves, he was placed in the Capitol rotunda.

Abraham Lincoln's body retraced the train route taken by the president-elect in 1861. Parades were held with caissons, riderless horses, and an array of elected officials. Not until May 4 was Lincoln buried. His train did not just transport him to Illinois, "it transported [Lincoln] to immortality." 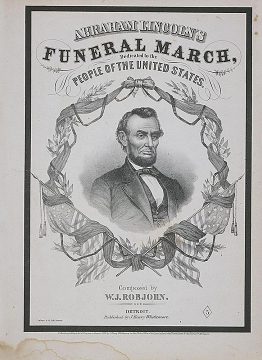 Sheet music, "Lincoln's Funeral March"
Lincoln's death occasioned an outpouring of public expressions of grief. Songs such as this were used as part of the official memorial activities. 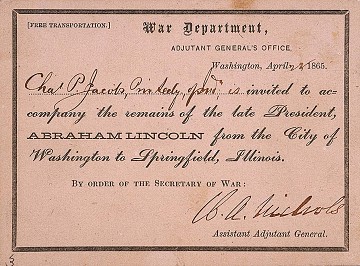 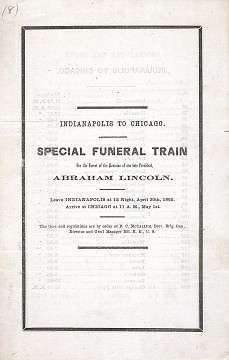 Funeral train invitation and timetable
The Lincoln funeral train had eight coaches--six to carry the invited mourners, one for the military honor guard, and one with the body. Those asked to ride the train received special invitations and timetables like the ones shown here. 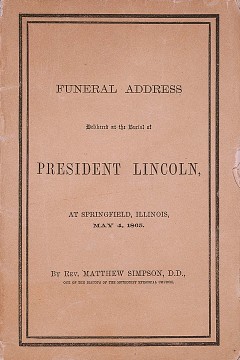 Funeral address delivered at the burial of Abraham Lincoln in Springfield, Illinois, on May 4, 1865. 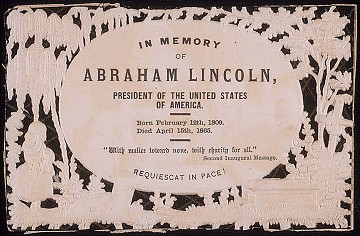 Mourning Card for Abraham Lincoln
President Andrew Johnson declared June 1, 1865, a "national day of fasting and prayer" in honor of Abraham Lincoln. Americans wore ribbons and collected these cards as a way to participate in this period of public and official mourning. 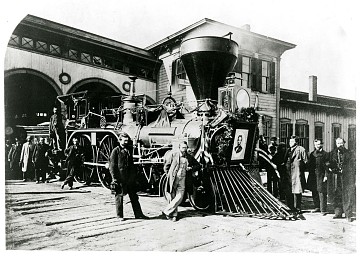 Funeral train
For nearly two weeks, from April 21 to May 3, 1865, this train carried the body of Abraham Lincoln home to Springfield, Illinois.
Courtesy of Library of Congress 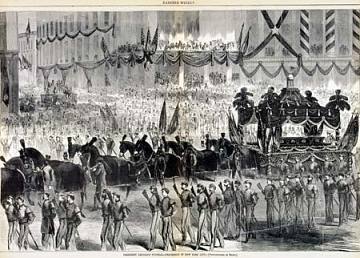 Lincoln's funeral train arrived in New York City on Monday, April 23, 1865. This image from the May 13, 1865, Harper's Weekly captures the nation's largest city in mourning.
Courtesy of Smithsonian Institution Libraries
‹ The Assassins up Personal Mourning ›