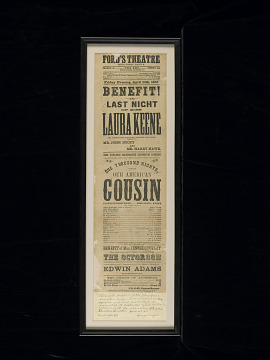 On April 14, 1865, President and Mrs. Lincoln went to Ford's Theatre with Clara Harris and her fiancé Henry Rathbone to see Laura Keene in Our American Cousin.

At 10:15, as the audience roared at the climactic line ("You sockdologizing old mantrap"), actor and Southern sympathizer John Wilkes Booth shot Lincoln and severely wounded Rathbone with a knife. The attack was part of a plan to destroy influential members of the government.

Despite breaking a leg as he leaped onto the stage during his getaway, Booth mounted a waiting horse and escaped into southern Maryland. Lincoln, taken to a house across from the theater, died the next morning. 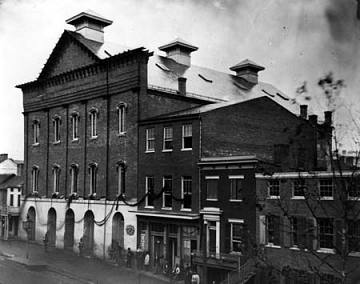 Ford's Theatre, site of the assassination of Abraham Lincoln, is on 10th Street between E and F Streets in Washington, D.C. The theater was built in 1863.
Courtesy of Library of Congress

Ticket to the Ford's Theatre production of Our American Cousin, starring Laura Keene, for April 14, 1865, the night Abraham Lincoln was assassinated.