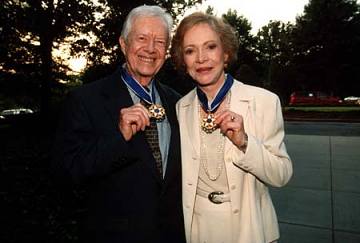 Jimmy and Rosalynn Carter with Medals of Freedom received from President Clinton, 1999

After leaving office in 1981, Jimmy Carter established the Carter Center, a non-partisan institute which addresses national and international issues of public policy. The Center, built in conjunction with the Carter Library and Museum at Emory University in Atlanta, has brought together a variety of political leaders, scholars, and others to resolve conflict, promote democracy, and protect human rights. In his post-presidential years, Carter has written more than thirty books, worked extensively with Habitat for Humanity, and remained a highly visible proponent of world peace.