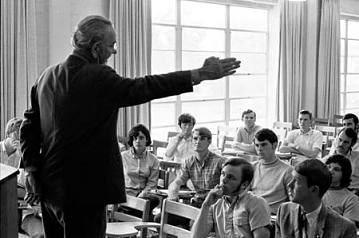 Lyndon B. Johnson returning to the classroom to talk with students at Southwest Texas State University, his alma mater.
Courtesy of Lyndon Baines Johnson Library

Following the inauguration of Richard M. Nixon on January 20, 1969, Lyndon Johnson returned to Texas, where his political career had begun nearly forty years before. He wrote his memoirs, The Vantage Point, taught students, and attended the dedication of the Lyndon Baines Johnson Library. Johnson played a key role in organizing the library's first symposium, which brought together scholars and leaders in the field of education. The former president also helped to organize a national symposium on civil rights, a major concern of his administration.