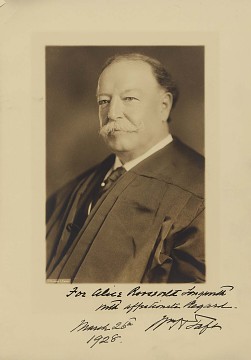 Chief Justice Taft gave this 1928 photograph of himself in his Supreme Court robe to Alice Roosevelt Longworth, daughter of his former mentor and campaign rival Theodore Roosevelt.
Courtesy of National Portrait Gallery

Yale University appointed William H. Taft the Kent Professor of Law after he retired from office. Later, he lectured and wrote articles for national magazines. In 1920 Taft actively supported Warren G. Harding's bid for the presidency, and one year later President Harding appointed him chief justice of the Supreme Court.

Taft is the only president to serve as chief justice. He held the position, and that of chancellor of the Smithsonian Institution, for the next ten years.