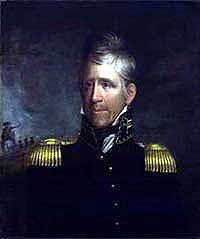 The first president to be born in a log cabin (although hardly the last to claim to be!), Andrew Jackson was also the first man elected to the House of Representatives from the state of Tennessee. As a military leader, his role in the defeat of the British at the Battle of New Orleans made Jackson a national hero, and in 1824 he seemed destined to ride into the White House on his popularity. While Jackson did, indeed, receive the most popular and electoral votes, he did not receive a majority, and the race was decided by the House of Representatives. Jackson's supporters were outraged when the House chose opponent John Quincy Adams, resulting in reforms of the American party system and the electoral process. Jackson returned in 1828 to win the presidency.

Cultivating the image of a feisty frontiersman, Jackson felt that it was his responsibility to represent the average American citizen. He fought with Congress over any legislation that appeared to favor the rich, a philosophy known as "Jacksonian Democracy." He also continued to fight the war on the frontier by signing the Indian Removal Act of 1830, which allowed the American government to forcibly relocate Native Americans to territories west of the Mississippi River. His opponents dubbed him "King Andrew," suggesting abuses of power in the name of the people. The voters didn't seem to mind, handily reelecting Jackson to a second term.