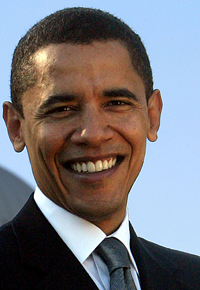 Born in Honolulu, Hawaii, Barack Obama earned degrees from both Columbia University and Harvard Law School. He served three terms in the Illinois senate from 1997-2004 and represented the state of Illinois in the United States Senate from 2005-2008. On January 20, 2009 Barack Obama became the first African American to be sworn into the office of president of the United States. He was re-elected in 2012.