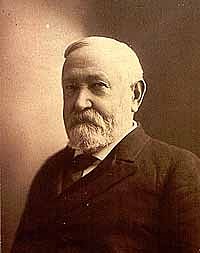 Grandson of President William Henry Harrison and great-grandson of a signer of the Declaration of Independence, Benjamin Harrison was a colonel in the Civil War and a Senator from Indiana prior to becoming president. A gifted public speaker, Harrison was so cold on a personal level--obsessed with germs, he wore gloves when shaking hands--that he was nicknamed the "Human Iceberg." During Harrison's administration, six states were admitted to the Union. He approved the Dependent Pension Act establishing funds for disabled Civil War veterans that Grover Cleveland had vetoed, set aside large appropriations for rivers and harbors, laid the groundwork for trade agreements with Latin America, and saw Congress pass the Sherman Silver Bill of 1890. The bill committed the U.S. Treasury to buy 4.5 million ounces of silver per month which triggered the Panic of 1893--just in time for Grover Cleveland's second administration.