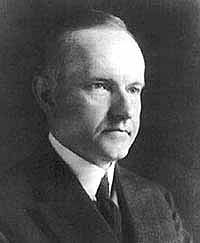 Ca. 1923. Courtesy of Library of Congress

Calvin Coolidge took office after Warren G. Harding's sudden--and some say mysterious--death. "Silent Cal" was reserved and honest, and his incorruptible presence was such a relief after the sordid goings-on of the previous administration that he easily won the 1924 election. The American economy was in the midst of "The Roaring Twenties," with a booming stock market and easy credit, and Coolidge felt that a "hands off" government would keep the economy going strong. Even the murmerings of an agricultural depression causing farm foreclosures in the last years of his presidency did not cause Coolidge to involve the government in financial matters, and he remained popular to the end of his term in office.