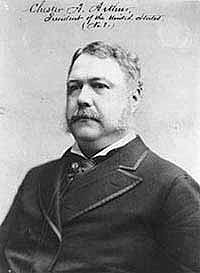 By Charles Milton Bell, 1882. Courtesy of Library of Congress

Chester A. Arthur, James A. Garfield's vice president, had received all his political jobs--including the vice presidency--in return for his loyalty to the Republican Party. When he became president after Garfield's assassination, Arthur surprised his party in 1883 by signing the Pendleton Act, which established the Civil Service Commission. Under the Act, those seeking jobs in the civil service had to pass exams pertinent to the position. This did not please the Republicans who had previously supported Arthur up the political ladder, and he was not nominated for a second term.

‹ James A. Garfield up Grover Cleveland ›