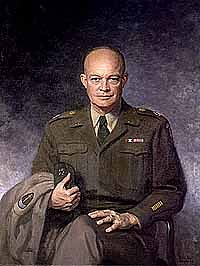 Dwight D. Eisenhower's success in the European Theater of Operations during World War II led to his appointment as Supreme Allied Commander in Europe--the organizer of the D-Day invasion of Normandy that helped bring about Germany's surrender. When the genial war hero ran for president on a promise to end the Korean War, the voting public made it clear that they did, in fact, like Ike. The eight years Eisenhower spent in office were for the most part calm, prosperous years for the country, with the healthiest economy since the 1920s. But there were volatile issues for the president to deal with, as well. Senator Joseph McCarthy of Wisconsin, was so intent on ferreting out supposed communists within the State Department that he ruined the careers of many innocent people. The president also had to handle intensifying civil rights issues, such as the South's defiant reaction to the Supreme Court-ordered desegregation of schools, causing him to send federal troops to escort the African American students to school. The space race began on Eisenhower's watch when the Soviet Union beat America into space with Sputnik I, the first satellite into space. In order to bring the American space program up to speed, the president approved a new congressional program to bring talented young scientists into the field of space technology.