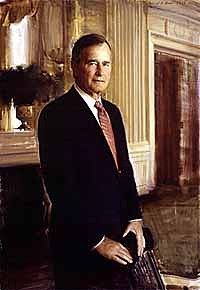 In the early 1960s, George Bush presided over a thriving oil business in Houston, Texas. Had he continued with that enterprise, his then-modest fortune might have grown immense. Instead, he turned to politics. By 1980, when he was elected Ronald Reagan's Vice President, he had served as ambassador to the United Nations, envoy to China, and director of the Central Intelligence Agency. In the process, White House aspirations had taken hold, and in 1988, thanks largely to his identification with the popular Reagan, he claimed the presidency. Bush proved most sure-footed in foreign policy, where, according to one observer, he proved a master of both "timing and substance." More widely traveled than any other President, he managed the policy transitions prompted by the collapse of the Soviet Union and the end of the Cold War. Perhaps his greatest success was the alliance he crafted to thwart Iraq's forceful takeover of Kuwait in 1990.