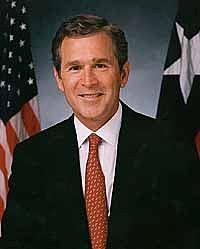 Courtesy of the Office of the Governor, Austin, TX

The son of former President and Mrs. George Bush, George W. Bush grew up in Midland and Houston, Texas. After earning degrees at Yale and the Harvard Business School, he returned to his home state to lead a Midland, Texas-based oil and gas company from the mid-1970s through the 1980s. In 1989, Bush led a group of partners to purchase the Texas Rangers, a major league baseball team, and served as managing general partner of the Rangers before embarking on a political career with a successful bid for the Texas governorship in 1994. Reelected as governor in 1998, he decided to seek the Republican party's presidential nomination in 2000. Bush proved an instant hit with Republican voters, easily defeating his opponents in a well-run primary race. The fall election campaign proved unusually tight, with his Democratic opponent Vice President Albert Gore winning the popular vote by a small margin but Bush edging him out in the electoral college to win the presidency. Disputes over ballot-counting in Florida delayed resolution of the election until December 12, when the U.S. Supreme Court ruled in Bush's favor and ended further appeals. With his election, Bush and his father became only the second father and son to hold the nation's highest office--preceded only by John Adams and John Quincy Adams. Bush was re-elected in 2004.