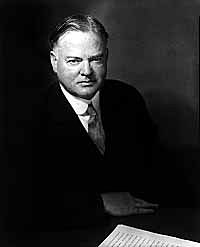 History might have a very different opinion of Herbert Hoover if he hadn't happened to preside over one of America's worst financial disasters. Hoover began his term at the tail end of a decade of unprecedented prosperity. However, rampant speculation led to the stock market crash of 1929, ushering in an era of severe economic depression. Though Hoover, a self-made millionaire and engineering magnate, attempted to bring some relief to the country's ailing financial institutions, he felt it was not the government's place to directly assist the individuals and families who were adversely affected by the hard times. Fairly or unfairly, he was blamed for the worsening depression and voted out of office after one term. Ironically, Hoover is also remembered for his brilliant administration of food and other types of aid during World War I, and again after World War II.