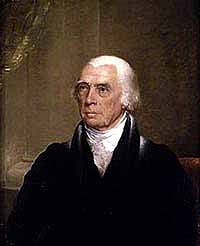 Nicknamed "The Father of the Constitution" for his work on the document, James Madison was also a framer of the Bill of Rights, the first ten amendments to the Constitution. After eight years as secretary of state under Jefferson, Madison and his popular wife Dolley moved into the White House. In 1812, Madison reluctantly asked Congress to declare war on Britain; this unpopular decision led to the British invasion and burning of Washington two years later. If not for General Andrew Jackson's brilliant victory over the British at the Battle of New Orleans in 1815, "Mr. Madison's War" might be all the fourth President is remembered for.