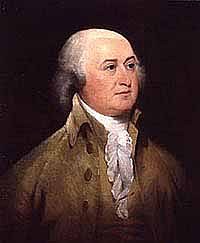 John Adams was one of the most fervent proponents in the colonies of independence from Britain, and used his eloquent writing and speaking style to persuade other members of the Continental Congresses to move with determination toward freedom. Adams helped draft the Declaration of Independence and negotiate the treaty that ended the Revolutionary War, and in 1789 he was elected vice president under George Washington. Eight years later he succeeded him as the second U.S. President. During his presidency, Adams came under fire from his countrymen for his attempts to protect the shipping rights of the United States and keep the country out of the growing hostilities between France and Britain. But by establishing a naval department during this period, he was honored as the "Father of the Navy." At the beginning of his presidency, Adams and his family moved into the unfinished residence in the new federal city, Washington, DC. His wish for the future of what was later to be known as the White House was "May none but honest and wise Men ever rule under the roof."