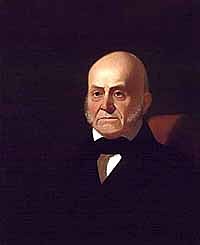 The son of John Adams, the illustrious patriot and second President of the United States, John Quincy Adams had been an outstanding diplomat, member of the U.S. Congress, and secretary of state before becoming president. However, his election in 1824 was mired in controversy. In that contest, no candidate received a majority of either the popular or electoral votes, and the race was decided by the House of Representatives. The House, led by Speaker Henry Clay, chose Adams, even though Andrew Jackson had received the most votes. When Adams in turn selected Clay as his Secretary of State, Jackson supporters decried the "Corrupt Bargain."

As president, Adams' ideas for using taxes for public works projects and scientific exploration were not popular with the public, and he was not reelected. After his presidency, Adams spent a long and distinguished career in the House of Representatives, where he was a tireless opponent of slavery.