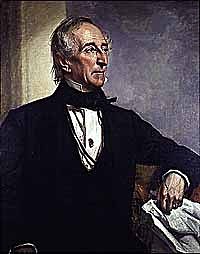 With the death of President William Henry Harrison, John Tyler was the first vice president to assume the presidency, a precedent that did not sit well with some members of Congress--particularly his own party, the Whigs. Tyler's general disregard of their agenda eventually caused the resignation of all but one member of his cabinet, and ultimately he was expelled from the party. Yet, despite challenges to his authority, and nicknames like "His Accidency," Tyler refused to open mail addressed to the "Acting President," taking on all the powers and privileges of the presidency. Among Tyler's acts as president were bringing an end to the Seminole War, working on the Webster-Ashburn Treaty of 1842 to resolve the Maine boundary dispute, arranging for the first American trade mission to China, and expanding the Monroe Doctrine to include Hawaii. Another first for Tyler--he was the first president to be married in office.