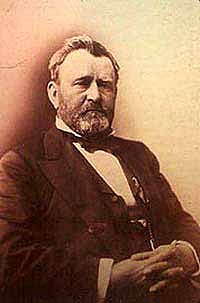 Like Zachary Taylor, Ulysses S. Grant was elected to the presidency in honor of his heroic deeds on the battlefield, even though he had absolutely no political background. Not only was Grant lacking in political experience, he also had no particular interest in using the powers of the presidency, and was taken advantage of by dishonest associates. One of Grant's few accomplishments was approval of the Specie Resumption Act, which made it legal to redeem "greenbacks" issued during the Civil War for gold or silver coins. However, the country was more likely to remember Grant's administration for the fraud, graft, scandal, and corruption of his second term. Grant was happy to leave office after eight years.

‹ Andrew Johnson up Rutherford B. Hayes ›