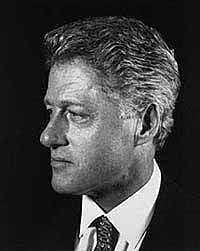 William Clinton, then governor of Arkansas, was elected to the presidency in 1992 and went on to help create an unprecedented time of peace and economic prosperity in the United States. Among the successes of his presidency were achieving the lowest unemployment rate in modern times, managing an overhaul of the economic system, and proposing the first balanced budget in decades. In his second year, after the failure of his health care reform program, Clinton displayed a marked shift in focus announcing that "the era of big government is over." In the international arena, Clinton defended an expanded NATO, successfully sent peace-keeping forces to war-torn Bosnia, and responded with attacks on Iraq when Saddam Hussein halted U.N. inspections for nuclear, biological, and chemical weapons.

The only Democratic president since Franklin D. Roosevelt to win a second term, Clinton's administration was plagued by investigations and personal scandals. On December 18, 1998, the House of Representatives voted to impeach William J. Clinton on charges of perjury and obstruction of justice stemming from the president's testimony in a civil suit and his statements regarding his relationship with a White House intern. The debate largely focused on whether his crimes, if real, rose to the level of an impeachable offense. The Senate found him not guilty of the charges brought against him.