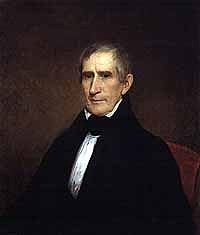 William Henry Harrison was the son of a signer of the Declaration of Independence, and his grandson, Benjamin Harrison, would later become president. A hero of the battle of Tippecanoe, where he defeated Shawnee warriors and their chief Tecumseh, Harrison would unfortunately not have the opportunity to savor the popularity that got him elected president. After delivering the longest ever inaugural address on a very cold and windy March day, Harrison developed pneumonia and died exactly a month after his inauguration.