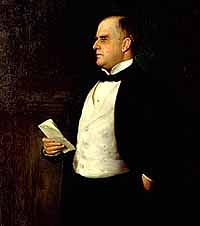 In the Civil War, William McKinley served admirably under future president Rutherford B. Hayes. When McKinley was elected president in 1896, he emulated his predecessor Grover Cleveland's "hands off" approach, allowing big business to run amok. But when he passed the Dingley Tariff Act, establishing higher tariffs on imports, the American economy finally turned around for everyone. It was at foreign policy that McKinley excelled. In 1898, McKinley tried to help Cuba declare independence from Spain. When the American battleship Maine was blown up in Havana harbor, the U.S. declared war on Spain and won in four short months. Also in 1898, the United States annexed Hawaii, acquired Guam, Puerto Rico, and the Philippines Islands through the Treaty of Paris. Meanwhile, Secretary of State John Hays negotiated a trade policy with China, and arranged for the treaty under which the U.S. would build and own the Panama Canal. Winning reelection in 1900, McKinley was shot by a Polish anarchist in Buffalo the following year.