The American Revolution: A World War

This website is based on an exhibition that was on view at the National Museum of American History from June 2018 to July 2019.

"A compleat History of the American War... is nearly the History of Mankind for the whole Epocha of it. The History of France Spain Holland, England and the Neutral Powers, as well as America are at least comprized in it."

The American Revolution was far more than an uprising of discontented colonists against the British king. It was a world war that involved multiple nations fighting battles on land and sea around the globe. This broader conflict ultimately determined the outcome in America. The Revolution’s origins lay as much in the Seven Years’ War as in colonists’ discontent. Major American victories, especially the final one at Yorktown, required extensive support from allies. Once won, the Revolution’s consequences echoed far beyond American shores.

By the early 1700s, leading European nations were competing around the world for wealth and power, establishing far-flung colonies or trading outposts. The British colonies in North America were just one example. Note the details in this remarkable 1719 map, which illustrates the imperial worldviews of European rulers of the era as well as the limits of their knowledge. 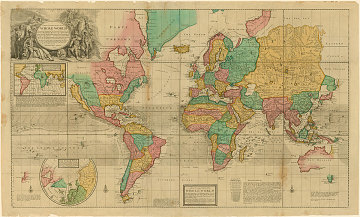 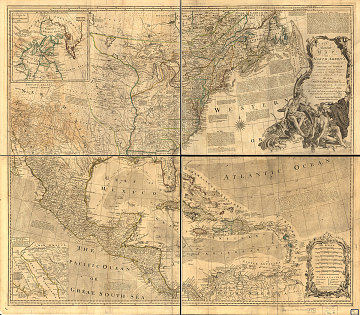 A map of North America that identifies British and Spanish claims on the continent, 1765