England and Its Enemies

This cartoon illustrates the grave difficulty Britain faced in winning the American Revolution. What had started as a colonial rebellion became a world war in which Britain, the lion, faced four major adversaries: Spain, the spaniel; France, the rooster; the American colonies, the snake; and the Dutch Republic, the pug. In contrast to its other wars of the 1700s, Britain had no major allies in this one. 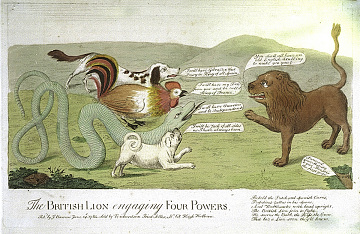 ‹ Treaties of Alliance up National Economy ›