INTERACTIVE: Take a closer look at the extraordinary detail in The Siege of Yorktown and The Surrender of Yorktown by Louis-Nicolas van Blarenberghe, 1786 >>

“This afternoon about 3 o’clock the enemy began to cannonade our right wing from the left. Tonight …the enemy began to salute our left wing and shortly afterwards our entire line with bombs, cannons, and howitzers.”
—Johann Doehla, a German soldier serving with British troops in Yorktown, about the start of the bombardment

This French perspective of the Yorktown siege was the Comte de Rochambeau's copy of a painting done for King Louis XVI. It depicts the dramatic march into the siege lines of well-arrayed French soldiers. Rochambeau is at the center, arm upraised, directing them. George Washington is to his left, studying a map, with the ill-clad American soldiers on his far left. 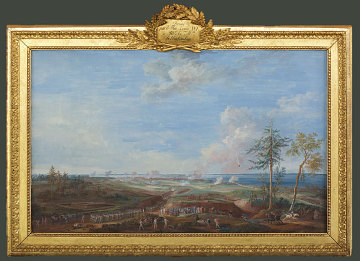 The Siege of Yorktown by Louis-Nicolas van Blarenberghe, 1786

“We could see on their faces the satisfaction they felt in garnering so gloriously the fruits of a campaign that will do eternal honor to France and in having reached the decisive stage in the struggle for American liberty.…”
—Comte de Clermont-Crèvecoeur, a lieutenant in the French army, about the French generals and admirals in attendance

This French perspective of the Yorktown surrender was the Comte de Rochambeau’s copy of a painting done for King Louis XVI. It emphasizes the British soldiers, in red, parading in humiliating surrender at Yorktown before their French enemies, decked in blue. The Americans, to the left of the British with backs toward the viewer, appear secondary. In their global war, the French were far more concerned with defeating their historic enemies, the British, than with assisting Americans in winning independence. 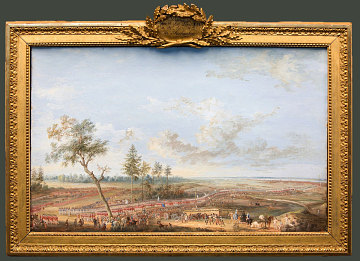 The Surrender of Yorktown by Louis-Nicolas van Blarenberghe, 1786

Who Won at Yorktown?

The image to the right shows The Surrender of Lord Cornwallis, a well-known painting that hangs in the U.S. Capitol Rotunda. It presents a nationalistic perspective shared by many Americans: that Yorktown was primarily an American victory. The image above, from The Siege of Yorktown, more accurately highlights the coordinated Allied leadership that winning required. 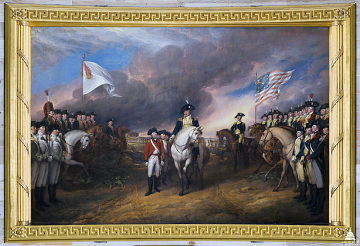 The Surrender of Lord Cornwallis by John Trumbull, 1820

Courtesy of Architect of the Capitol

‹ African Americans at Yorktown up Treaties of Alliance ›