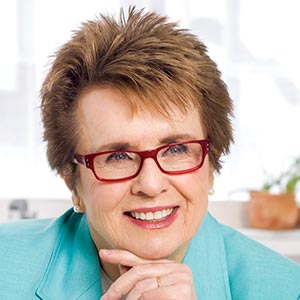 “I’m only going to play this once, because this is about history.”

Billie Jean King, sports icon, activist, and founder of the Billie Jean King Leadership Initiative; excerpted from an interview with David M. Rubenstein, chair of the Smithsonian Institution Board of Regents, on the occasion of being awarded the National Museum of American History’s Great Americans Medal on September 25, 2018. Edited for clarity by the National Museum of American History, March 2019.

On starting out in California

The reason I was able to play tennis was because it was free, it was accessible, and the parks and recreation [facilities] of Long Beach, the whole city, provided free instruction every week. I was really lucky. I was playing softball, and Susan Williams, who had asked me to play in fifth grade, asked if I wanted to play tennis. I said, “What’s tennis? What do you do?” She said, “You get to run, jump, and hit a ball,” and I go, “Those are my three most favorite things in sports. I’ll try that!”

When I was 13, I saw Althea Gibson play at the Los Angeles Tennis Club. That was the hub for Southern California tennis in those days. And you know, if you can see it, you can be it, and I remember seeing Althea, and now I knew what no. 1 looked like, and how good you had to be. I thought, Wow, I have a lot of work to do. I just couldn’t wait to go work.

The one thing my dad always taught us was that every generation gets better. So I’m looking at how well she plays, and yet I’m younger. [I thought,] I’m gonna have to get better than that to be no. 1? Oh my God, how am I going to do that? It was so inspiring, though, and of course she’s our Jackie Robinson of tennis. Althea was the first African American to ever win a major, and African Americans weren’t allowed to play in any [United States Lawn Tennis Association] sanctioned tennis tournament until 1950, which is three years after Jackie Robinson, who played for the Brooklyn Dodgers. So, she is definitely our Jackie Robinson of tennis.

On her father’s advice

My dad was a really good basketball player. He was asked to join the NBA when it first started in ’48. You know, I’m named after him because he was in World War II in 1943 [when] I was born, so my mom didn’t know if he was going to come home. He was a jock, so he sat with me. He was brilliant. He never let me read a clipping after 15 years of age, because I got upset when the newspaper put me on the front page of the sports [section] for the first time—Long Beach Press-Telegram—when I lost, Love and Love [zero-zero], and I went, “I’ve won tournaments, I’ve won this, and I finally make the front page!” He goes, “STOP. What’s that match about?” I said, “What do you mean?” He said, “Well, when did it happen?” I said, “Yesterday,” and he said, “Exactly. It was about yesterday. Forget it. It’s what you do with your life today that matters, and tomorrow. I don’t want you ever, ever to read your clippings, look at your videos. You’re not allowed to do any of that anymore.” I stopped that day. He made sense to me. He was correct.

We got equal prize money (at the US Open) in 1973 (and it was the first of the four major tounaments to offer equal prize money). Billy Talbert was a great player in the late ’40s, and I went and talked to him in 1972, one-on-one, quietly, calmly. It’s what you always try: behind the scenes first. When you go to the media, it is a last resort. So I had a meeting with Billy, but before I went to the meeting, Ceci Martinez had done a survey. She passed it to the fans at the US Open to find out. I said, “I want information. Do they think we should be here? Should we get equal prize money? Are they for that? Are they against?” She did that, and Esme Emanuel, another player, helped pass it out for two days. We just kept getting information.

My former husband and I already owned tournaments by now. So I’m a business woman, I understand the sponsor side. I understand the challenges, the risk. I went to Joseph Cullman of Philip Morris, Marvin Koslow and others at Bristol-Myers, and some others, and I said, “If any of you would put up the money to make up the difference from what we’re getting now, and if we got the equal prize money with the men, would you be willing to do that?” I didn’t want to just go ask [Billy] without bringing something to the table.

So I had two things. The survey came out much more positively than we thought. That was good. I went to Billy, who’s a great business guy himself . . . and I said, “We have Ban deodorant,” which is Bristol-Myers, “willing to make up the difference in the prize money.” He got real quiet. He was in shock, because what are you gonna say when someone is willing to bring a sponsor to the table for you? He’s the one that announced it. I thought the board of directors at the USTA [United States Tennis Association] had passed it, and I have been looking into it more and more lately because I might do a book. Now I’m finding out they never voted on it; he just announced it. Without Billy Talbert, we would have never had [this]. This is why when people are in leadership positions—men usually are, not always, but usually—they can change things overnight. He changed from 60 or 50 percent, or whatever we were getting, in a minute, overnight, because he just did it, and that’s what CEOs can do. Everyone is an influencer and people have to speak up. This could happen so quickly, but people don’t like to give up power.

I knew all about Bobby [Riggs]; he was one of my heroes. I thought he got a bad deal in getting enough attention for what he deserved, because right at the sweet spot of his career was the Second World War. And I felt bad for him, but I respected him because I love my history. I knew every champion. I’d watched everything. I read everything I could on him, but when Margaret [Court] lost [to Riggs], I had to play him. I didn’t want to play him; I had to play him.

I didn’t know [I was going to win]. Two months out, or six weeks out—whenever we announced it—I’m very anxious, not happy, start visualizing, start thinking about it, started thinking about anything that could go wrong, how I would stay calm and focused. And I have to visualize everything. I just love visualization. And then I would think about getting a bad line call. I’m thinking the Astrodome has gotta be high, but I went out to the Astrodome the day before the match. I went up in the stands. I looked at how the court was structured and how it was put down and what direction on the baseball field. I knew there would be no wall behind the court, so the depth perception was gonna be shocking, but I knew whatever it was for me was going to be for him as well. We’d never played against each other—so I knew I’d never hit a ball against him, but neither has he hit a ball against me.

I never think [that I’m going to win] when I’m in a match. It’s one ball at a time. One ball at a time. Anything can happen. [When I won], he jumped over the net and said, “I underestimated you,” and we put our arms around each other. I told him before the match, “I’m only going to play this once, because this is about history, and it’s about equality; it’s not about the money.” He finally understood that at the end of his life.

I was 12 when I had my epiphany: Why white balls, white people only? Everything in tennis was white and I asked myself “Where’s everybody else?” So I promised myself that day at the Los Angeles Tennis Club, if I was no. 1, if I was ever good enough—I knew tennis was played all over the world, so I thought, This is an amazing opportunity. I can do something greater than just winning tennis matches. I wouldn’t have used the word “platform” then, but that’s what I was thinking as a child.

Ilana [Kloss] and I are founding board members of the Elton John AIDS Foundation. I founded the Women’s Sports Foundation in 1974—Donna de Varona was our first president—and we’ve invested $80 million—invested, not given—in others. We are the one women’s sport (organization) that does research. There’s no research on us! We’re the first ones to start doing that. We’re also the guardian angels of Title IX, for the sports part. Ilana and I started the Billie Jean King Leadership Initiative. That is for equality in the workplace, not just by money but by culture, race, and by everyone being able to be their authentic self to go to work. 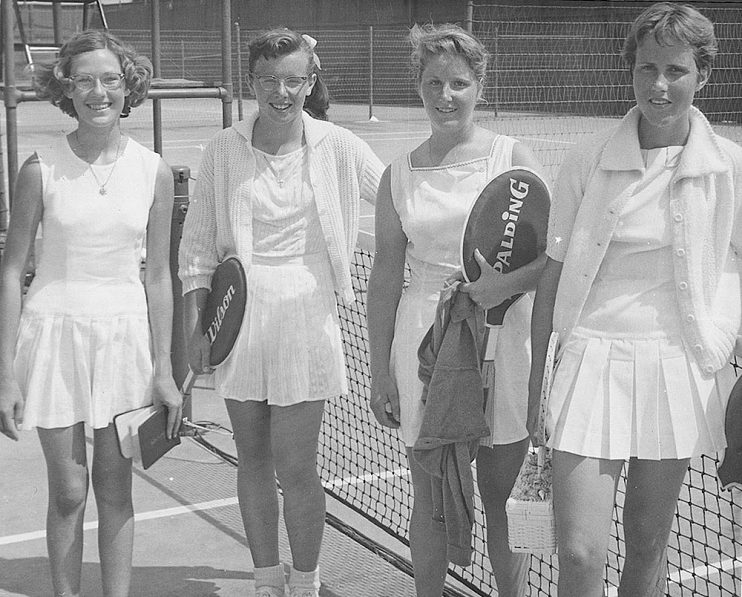 At the Lakewood Country Club in Lakewood, California, 1959. King and Karen Hantze (far right) won the Wimbledon doubles title in 1961 and are still the youngest doubles team in the history of Wimbledon. 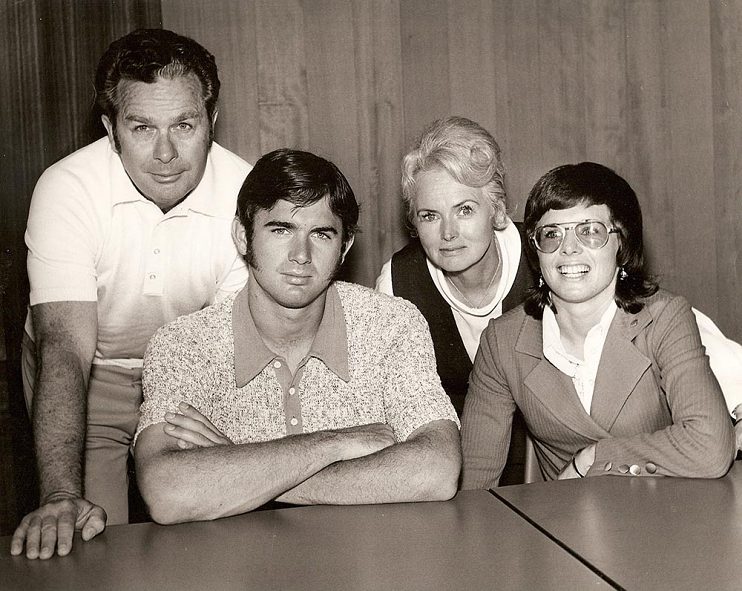 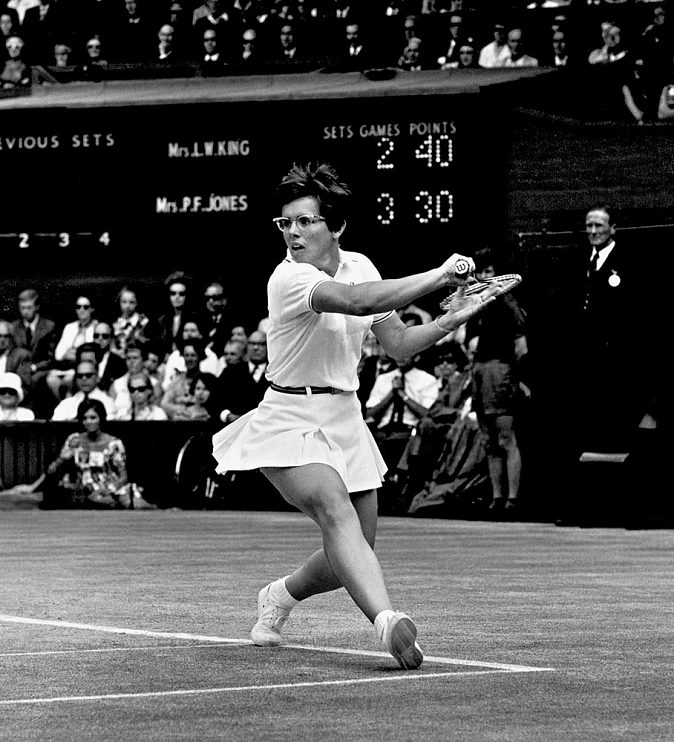 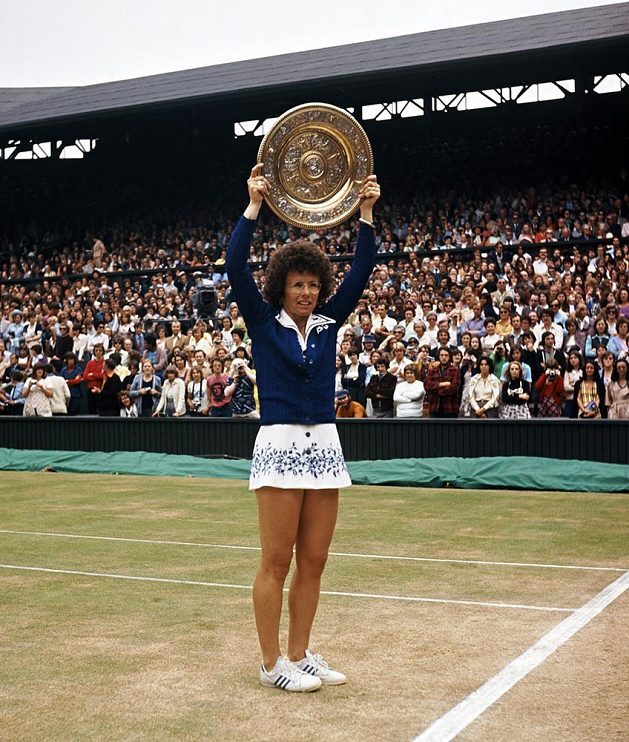 With the Wimbledon trophy in 1975 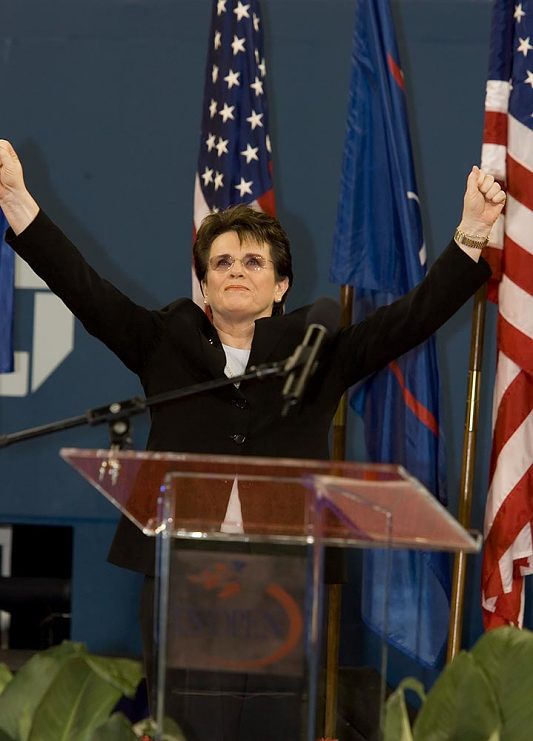 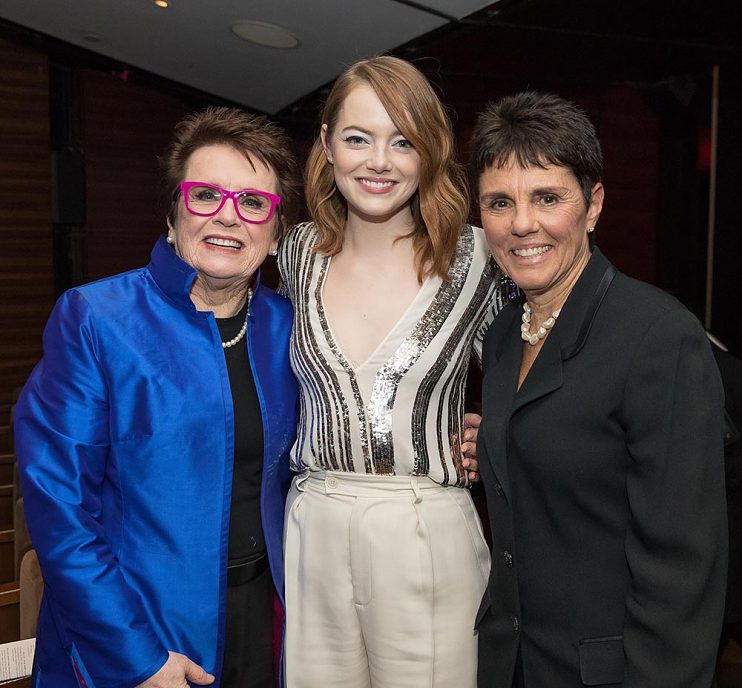 With Emma Stone (center) and Ilana Kloss in 2018 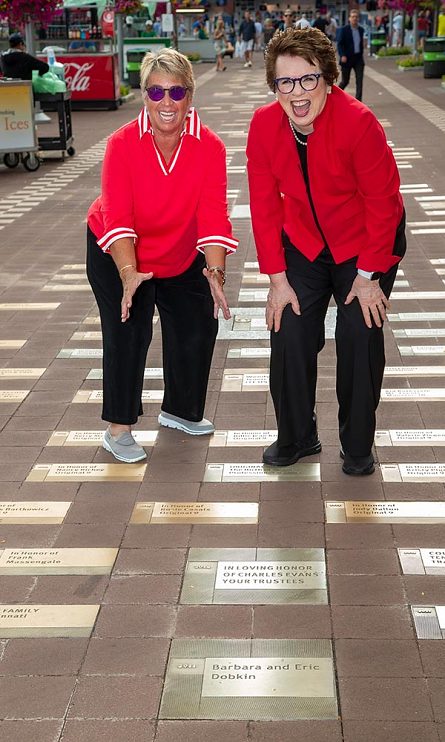 With Rosie Casals at the 2019 US Open

At the Lakewood Country Club in Lakewood, California, 1959. King and Karen Hantze (far right) won the Wimbledon doubles title in 1961 and are still the youngest doubles team in the history of Wimbledon.

With the Wimbledon trophy in 1975

With Emma Stone (center) and Ilana Kloss in 2018

With Rosie Casals at the 2019 US Open