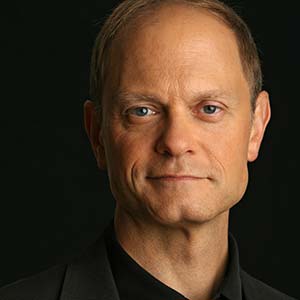 David Hyde Pierce, actor, director, and comedian known for playing the psychiatrist Dr. Niles Crane on the NBC sitcom Frasier; excerpted from an interview with the National Museum of American History, October 20, 2017.

On growing up in Saratoga, New York

Saratoga Springs, New York, was a wonderful place to grow up. It was a relatively small town. I could walk to elementary school, and I could get on my bike to go play with friends. I grew up in a middle-class home. My dad was an insurance agent, and my mom was a homemaker who also sometimes worked at the office.

The great thing about Saratoga is that it had this incredible influx of arts that a small town might not normally have. Skidmore College attracted a certain level of artistry, and when I was about eight, a big performing arts center opened, and it became the summer home of the Philadelphia Orchestra and the New York City Ballet. As a little boy, I had advantages of small-town life and also exposure to this really high level of artistry. That was my first exposure to the performing arts. I didn’t know at the time that it was as good as it gets.

My parents were extraordinarily good people. Such integrity. They were very tied to the fabric of the community. My mom was on the Altar Guild at the church, and she worked at the Flower and Fruit Mission at the hospital. Dad was in the Rotary [Club], and on the board of the church and the Home of the Good Shepherd, which was an elder care facility. They were good parents, and each in their own way very funny. My mom had a very dry sense of humor, and my dad was very sort of daffy in his sense of humor. I know that I inherited both those strains and use them in my own work. Together, we watched All in the Family, The Carol Burnett Show, The Mary Tyler Moore Show, The Dick Van Dyke Show, and Laugh-In. All were very influential to me.

I remember when I was in high school, I played the piano and I had gotten great encouragement from a mentor to go into this as a profession. My parents were scared to death. They sat me down in the living room with the encyclopedia and opened up to Albert Schweitzer because he was a great organist and an expert in Bach, but he was also a scientist. They pointed out that he did all of these other things as their way of encouraging me to “just keep your options open.”

Ultimately I ended up going to Yale, partially because it had a strong music department, but partially because it wasn’t just a conservatory, and I could study all kinds of things. I remember calling my parents from college with the good news that I wasn’t going to be a music major after all, and they were so relieved. I said, “I’m gonna be a theater major.” And there was discernible silence on the other side of the phone.

On getting started as an actor

I got out of college, I ended up being an English and theater major, and came straight to New York in 1981 and got a small part in a Broadway show, Beyond Therapy. I found myself opening on Broadway with John Lithgow and Dianne Wiest, these amazing actors. I remember my parents being there opening night, sitting in the balcony surrounded by celebrities, seeing their son on Broadway. After all of their fears and concerns about me being in this business, they finally said, “Well, this is okay.”

That night the show got a terrible review in The New York Times, and we closed in two weeks. So in that one capsule, I got the greatest high imaginable for a young actor: I got my Equity card. But I also witnessed an amazing thing that happens in show business. On opening night, the audiences are having a great time and laughing hysterically. A bad review comes out, and the next performance is silent because everybody suddenly knows it’s bad, now that they’ve read it in the paper. I can still see sitting on that stage when the curtain came down, just weeping because it was just so overwhelming, the loss. But the fact that I stuck with it after that experience made me realize, this is what I was meant to do. That didn’t stop me.

“I think the highs and lows of the theater, for me, are equally vital”

I find them to be such a rich reinforcement and reminder of the experience of life. As we’re making this recording, I’m in the middle of doing a production of Hello, Dolly! on Broadway with Bette Midler. Hello, Dolly! is an iconic Broadway show, a feel-good show, and it’s richly complicated and wonderful. It is extraordinary the number of people who come to me afterwards saying how much they needed this ─ this rejuvenation, this escape from what’s happening in the world. A friend said, “You drained away all our cynicism.” That’s what theater does.

About the Frasier experience

There’s great intimacy and vulnerability in performing in film too. I’m impressed when, with all of this massive technology sticking its lens up their noses, film actors can still do great art.

I was so lucky to fall into the Frasier experience because, coming from a theatrical background, it was shot in front of a live audience and was written like a play. So I felt like I was right at home there. The recipe in that kind of sitcom, with multiple cameras, is that what works for the live audience will work for the people at home. So you don’t have to worry about making it smaller, making it bigger, you kind of just do your job. And I learned to accept the cameras. Frasier’s writers recognized from the very first episode, this isn’t just funny, and it’s not drama, but it has elements of both. I think that’s what keeps that show popular.

Part of the fun of having a career like I’ve had is finding new characters and new things that I didn’t know I liked. Alec Guinness and John Cleese are my role models. Why? Part of it was their restraint and part of it was their insanity, and the mix of those two things has always been sort of at the essence of what I do, even if it takes different forms. Buster Keaton is another role model for me because there’s something about not showing your cards too much, just letting it be internal. I love the idea that the audience can figure out what you’re thinking, as opposed to you telling them.

“I realized that all the years I’ve been acting, I had a director’s voice talking in my head too”

Directing is a chance to take care of people, and to be part of a community, to shepherd, to enable, to discover, and to be amazed by people’s gifts. It Shoulda Been You at the out-of-town George Street [Playhouse] was my first time directing professionally. It was a new musical, and it was complicated. The book and most of the lyrics were written by my husband, Brian Hargrove. It was a recipe for disaster in terms of interpersonal life. What I didn’t know at the time was that the hardest thing in the world to direct is an original show, let alone an original musical. If you’re directing Hamlet, you know the play works. So if there’s a problem you know it’s something in the room, whereas when it’s a brand-new piece everything is up for grabs.

We brought it to Broadway. It was in the same theater where I had made my Broadway debut, Beyond Therapy, the Brooks Atkinson Theatre. It didn’t close as quickly, but the same thing happened. The New York Times hated it, and the critics were split on it, and we kept it going as long as we could, but it closed, in spite of a wonderful audience reaction. So it didn’t kill my love of directing, it just reminded me of the realities of the theater.

I was sitting in the Frasier greenroom, and I picked up The New York Times, and it said, “Mike Nichols to direct Broadway musical of Monty Python and the Holy Grail.” Well, I had worked with Mike several times in the theater, I was a complete Monty Python fanatic, and I really wanted to do a musical on Broadway. I called my agent and said, “I don’t care what part it is, I just want to be in it.”

I loved the ensemble camaraderie in Monty Python. It was such a new and wonderful experience for me. I had never been in a musical or danced in a show before. The incredible strength and precision of the actors! Think about an entire ensemble onstage doing those wonderfully fast turns, and imagine if one of them moved an inch to the left, they would kick the other person in the head with the power of Bruce Lee doing martial arts. I was working with comedians like Hank Azaria, Michael McGrath, Sara Ramirez, Eric Idle, and Tim Curry doing an incredible sort of improvised comedy. Working with Mike Nichols was just amazing, and we had so much fun.

When I see the young performers today, I can’t believe all the things they can do: their physical gifts, their amazing dance training, and their vocal training. These are kids who started out as fetuses wanting to be in musicals, so they have a century of training, and they know every kind of style. I didn’t go to drama school. I didn’t have vocal training classes. I didn’t have physical movement classes. I had scene study in college where we worked on characters, and then I went to New York and just started out. I don’t have any regrets, because I’m very happy with the way my career went, but as I look at these kids I think, Wow, they have so many more arrows in their quiver than I ever did.

I look back on my life and my career at this point, there is so much that I am grateful for, so much that I appreciate, that makes me happy. I guess I have more gratitude than pride. My obligation now is to do things that I’m passionate and excited about. 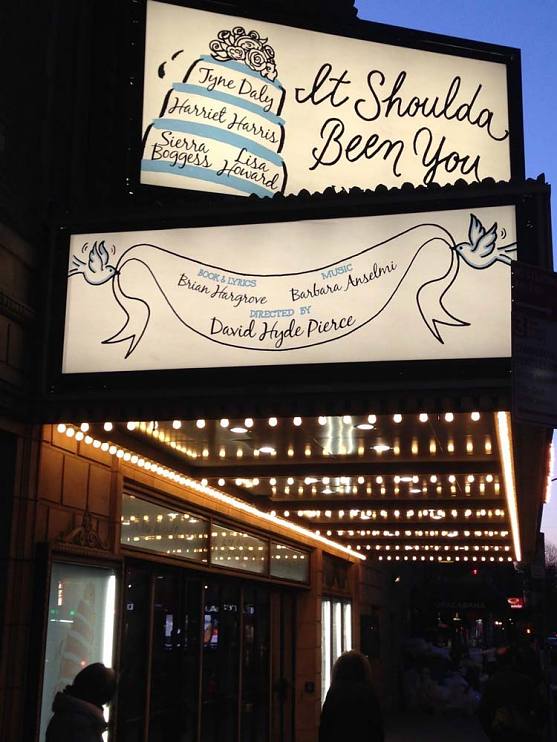 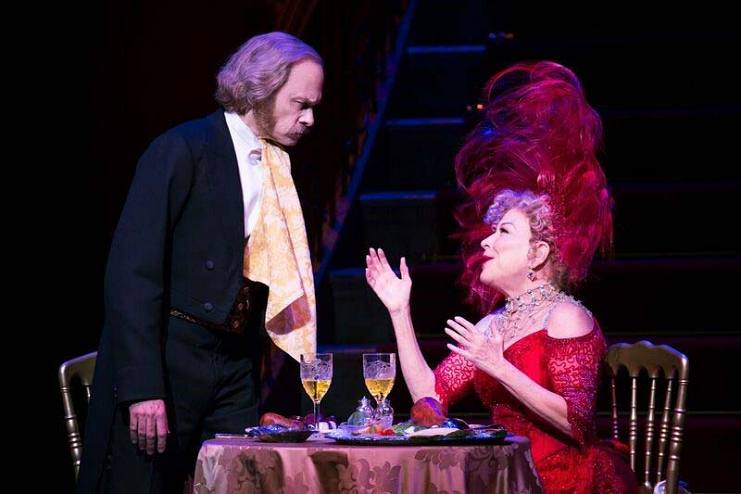 David Hyde Pierce and Bette Midler in the 2017 Broadway revival of Hello, Dolly!

David Hyde Pierce and Bette Midler in the 2017 Broadway revival of Hello, Dolly!

On the Hello, Dolly! dress and Archie Bunker’s chair

The story of Hello, Dolly! doesn’t wear its heart on its sleeve. There’s no sadness in the show exactly, but it has its roots in the greatest possible loss, and I think that’s why that show continues to be loved. Whether an audience is cognizant of it as they’re watching it, it touches on things that are the deep, deep bedrock for human life. I look at Carol’s dress here, and I recognize that Santo Loquasto, the brilliant designer for our Hello, Dolly! show, did a version of this dress for Bette Midler. It’s not this dress, but it’s definitely an homage or inspired by [it] in many little ways.

All in the Family is one of the shows I would watch with my folks as a little boy. I remember we laughed so hard. The first TV show I did called The Powers That Be was a Norman Lear show, and I was very aware of him and his lineage. He and I are still pals, and he’s still going strong as I say this. I think All in the Family is an extraordinary example of how arts in America can both reflect and influence who we are as a nation.