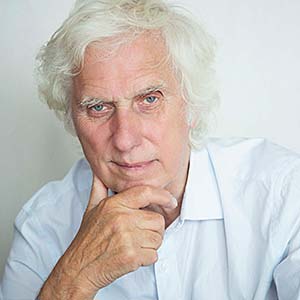 “Photography was perfect for me. I was very lucky because I found my dream. The amazing thing is, I never imagined that my dream could expand so far.”

“I heard that magic click; there it was for the first time. That is what has been pushing me ever since.”

My father worked in a small clothing business on Jarvis Street in Fort Erie, Ontario. He made men’s made-to-measure suits. He would bring home Life magazine from his store once a week, on Friday. And that’s where the dreams came from.

The first picture I took was with a Brownie box camera. I was about seven or eight, and I was allowed to take a photo of my family standing at the front door on a very cold Christmas Day. It was a big deal to take a photo at that time because film wasn’t much available during the Second World War. There were eight exposures on that camera, and I had one opportunity to photograph my family. I pushed this box camera into my stomach to hold it very steady. So I heard that magic click; there it was for the first time. That is what has been pushing me ever since. And it’s taken me into worlds that I could never have imagined.

I went to Seneca Vocational High School in Buffalo. There I learned about the New York Institute of Photography by seeing it advertised in magazines. I ended up staying in the YMCA in New York for a couple of months while I went to the New York Institute of Photography. I learned a lot, and it was everything I had seen in the Life magazines. But my parents were worried that I would get drafted in the Korean War if I stayed in the States, so I came back to Fort Erie after school. I ended up getting a job at the Fort Erie Times Review and then eventually the Welland Tribune, which was a daily. I learned how to think editorially. I had to come up with an image that would fill a page and interest people, no matter what. I couldn’t come home saying, “Well, it didn’t work out. The light wasn’t good.” I was expected to get a picture every time I was sent on assignment.

“I just felt my future was in the United States. I wanted to be a photographer like those making pictures for Look magazine and Life magazine.”

At first, I worked at a very small printing studio in Richmond, Virginia. My favorite photographer of the time was a man named Irving Penn, and he worked for Vogue. I wrote him three letters, and the third time, he replied and he said, “We don’t have any openings, but if you want to come here, I will be happy to see you.” As it turns out, one of his guys was going in the Army and was going to be gone for six months, so I got the job as his apprentice and moved to New Jersey.

One day, Penn had gone out of town, and I was left back to clean up the studio. I was very ambitious and wanted to do everything I could to endear myself to Penn. I decided I would brush all of the windows that seemed to have a lot of soot on them. I cleaned them all. Penn came back from the trip, and his mouth dropped open. He was very upset because it turns out he hadn’t closed or cleaned those windows for four years, and they had just the look of the light he liked for his photos. I had lost it for him. I thought I was going to be fired.

I went to Miami with Penn. I made a deal that I would drive and put his equipment in the trunk of my ’55 Ford hardtop convertible, so he wouldn’t have to spend the money to ship it there. I got my first wife, my son Mark, and my mother all in this big car, and I drove us to Florida. We stayed in a motel and I photographed with Penn. I learned so much watching him work on location instead of in a studio. I was a sponge, always learning.

On launching a career at Look magazine, working on movie sets, and meeting the love of his life

I went to Look magazine to inquire, and they pushed me out the door, essentially. They hadn’t hired a photographer in a dozen years, and they were staffed. A few months later, I got a phone call from Arthur Rothstein. He was a giant at the time. He was in charge of all photography at Look and was a famous FSA [Farm Security Administration] photographer. “We haven’t put any new photographers in for 12 years, and now we are going to put in two. One of them we want to be a strong photojournalist, and the other one we want to be able to do color fashion and food and whatever else we need.” And, long story short, he gave me a couple of assignments to do for Look. Eventually, I became Arthur’s guy. He really started promoting me.

I’ve also worked on over 100 movies. As a special photographer in the movies, you’re well paid because your obligations are to capture something different that they will use long into the future. To photograph movies, you have to know the script well, and you have to have the sympathy of the principals, the director, and the camera department, and try not to block any work that they are already doing.

I was working with Audrey Hepburn in Paris, and Françoise was in her last year at the Sorbonne. I asked her to dinner, and that was the start of our relationship. Françoise and I are one, and that’s the truth of the matter. We think the same. It’s a beautiful marriage.

On capturing the spirit of our American icons

I shot photos of Elizabeth Taylor in Las Vegas in 1961, and that gave my career an undeniable kick. Before I took her photos, she had been ill and hadn’t been photographed for a while. She had had a tracheotomy. I was unknown as a photographer, but I walked up to her at the end of Jack Hamilton’s interview and said, “Elizabeth, I’m new with this magazine. Could you imagine what it would mean to me if you’d give me an opportunity to photograph you?” She said, “Okay, come tomorrow night at 8:30.” I had a Hasselblad camera, six by six centimeters, two and a quarter inches square. I did the shoot in a simple way. She was quite a monument and did most of the work. And that was, frankly, the beginning of my career photographing celebrities.

I spent a month with Judy Garland toward the end of her career. We went to the opening of Judgment at Nuremberg, and I photographed there quite extensively. I went to Toronto and LA with her family. Judy was fragile but loved the attention. I photographed her with her kids, with her husband. And at the end of our time together, I wanted to get something that was special. I said, “We’ve done a lot of good pictures. I’d like a quieter picture of you, Judy.” And I moved in with my Hasselblad with a 250 [mm] lens, and she looked off to the side and started to cry. She did have a hard life in many ways, and that’s where the tear came from. I just encouraged it; she responded, and that’s the picture that I would always like on my wall, if possible.

I only photographed Marilyn [Monroe] on one occasion. We got a studio in Hollywood. She said, “I know what we need. We need Dom Pérignon champagne, a bed, white silk sheets and Frank Sinatra music. And I won’t wear anything.” Then she insisted, “The sheets must be silk.” Wow. Can you imagine a boy from Fort Erie, Ontario, hearing those words? 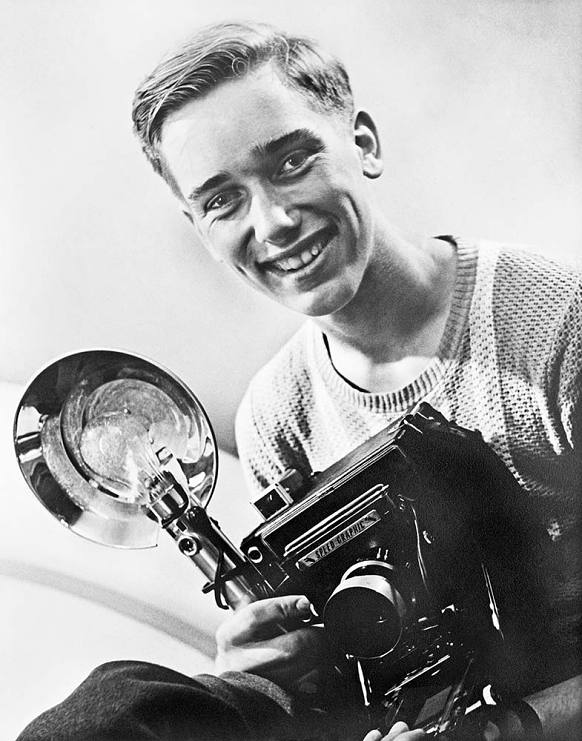 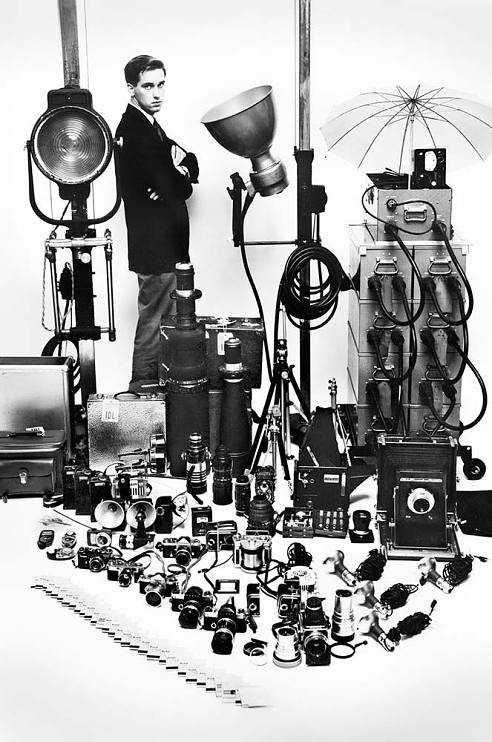 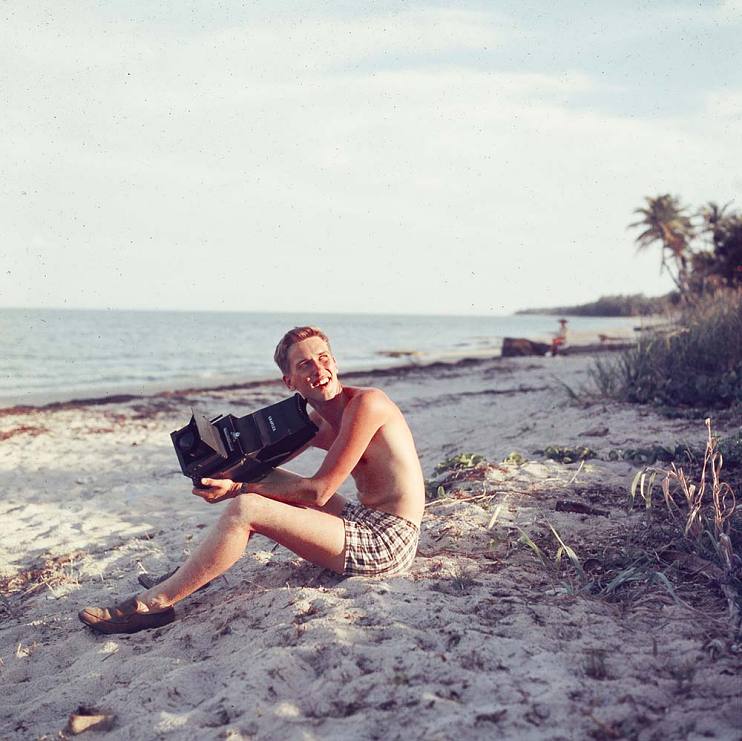 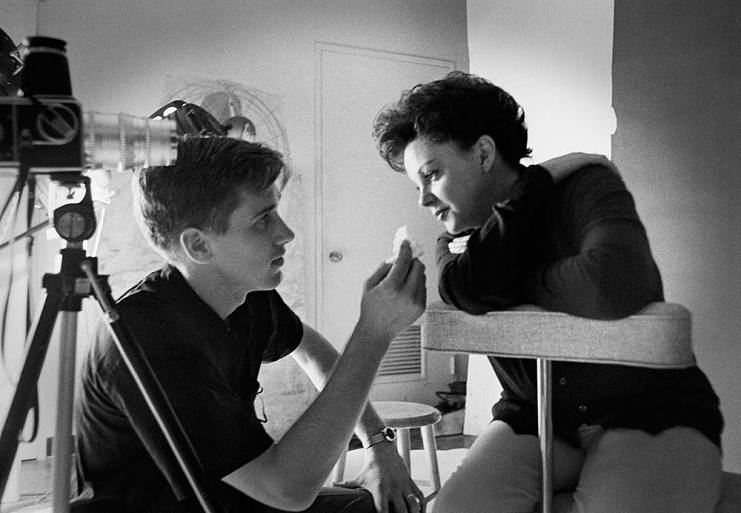 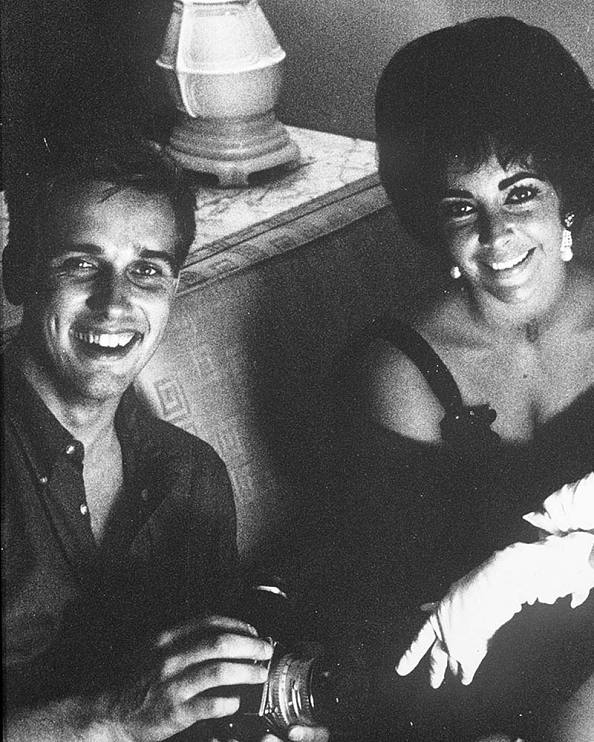 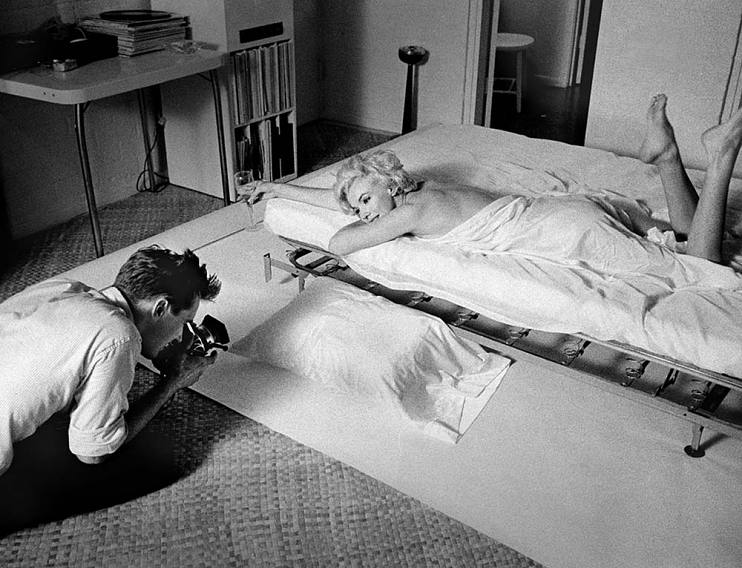 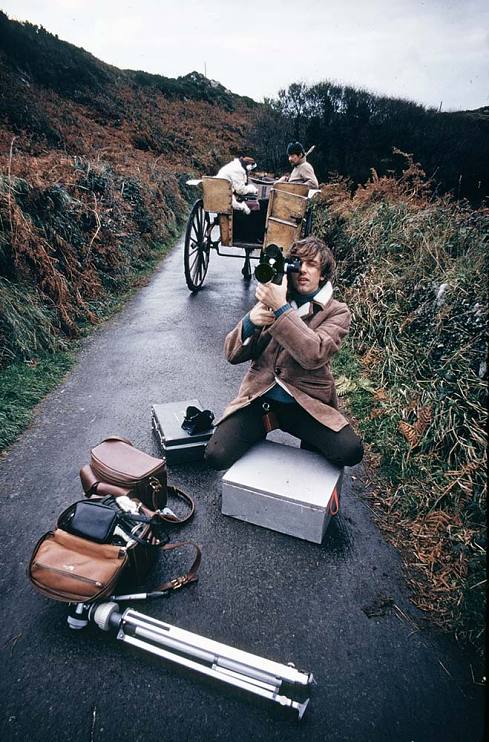 Douglas Kirkland at work on his documentary Good Bye Home, on why people were leaving Ireland, 1969 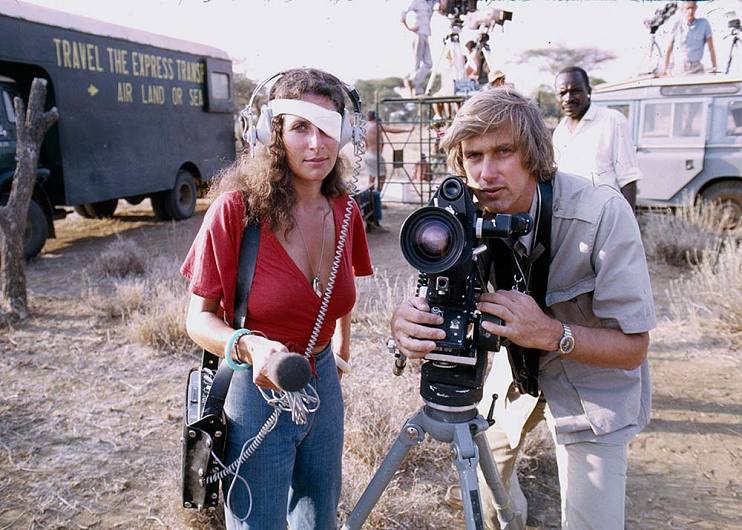 Françoise and Douglas Kirkland in Kenya, 1973 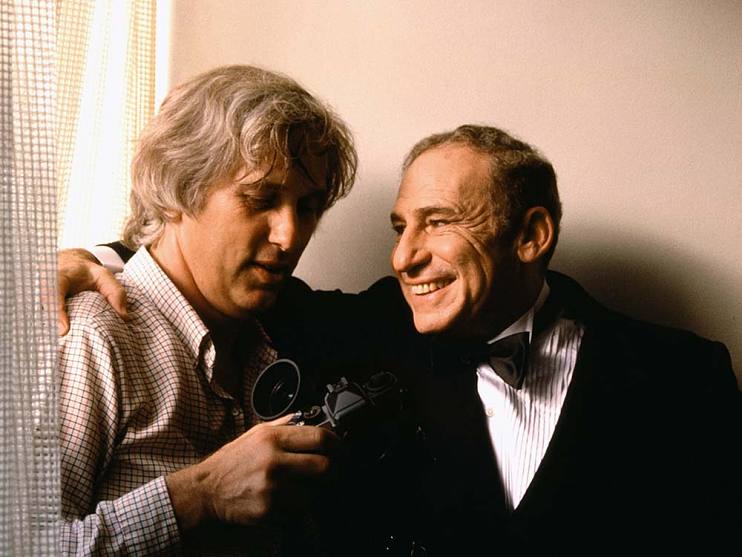 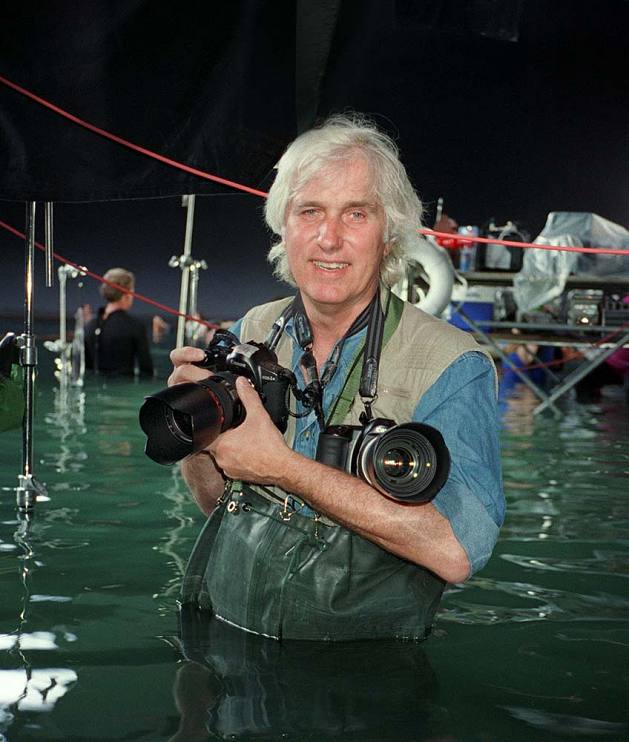 Douglas Kirkland on set of Titanic, 1996

Douglas Kirkland at work on his documentary Good Bye Home, on why people were leaving Ireland, 1969

Françoise and Douglas Kirkland in Kenya, 1973

Douglas Kirkland on set of Titanic, 1996