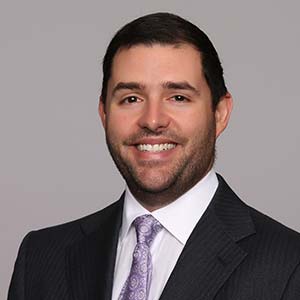 “Sports is a platform that can help make our country a better place; I will fight for that.”

Jed York, CEO of the San Francisco 49ers; excerpted from an interview with the National Museum of American History, October 13, 2017.

As a kid, I played baseball, soccer, basketball, everything. There was a lot of going into the woods and fishing. I was a student council president and captain of my baseball team. I loved the camaraderie and the physicality of sports.

My dad is a doctor. His family is German, Pennsylvania Dutch, and Polish. His great-great-grandfather was an indentured servant, as was his great-great-grandmother. They met in Pennsylvania and still had several years of servitude left, so they ended up skipping town to Oklahoma and changed their name to York. My mother was a great mom and homemaker, but also vice president of her father’s corporation. Her family is Italian from Naples and the Abruzzi region. We keep the Italian tradition of getting together over meals often and there is a lot of overfeeding people.

It was unique for me, growing up in Youngstown, Ohio, with the family’s sports team in San Francisco. My parents’ rule was that we could go to any game, but we had to go to school the next day. We would go to the away games in Washington, New York, New Orleans, or Atlanta. We knew that we were fortunate to be able to do that, but we also knew there was a work ethic required in order to prepare for school the next day.

We would probably go to 20 Penguins games a year. As an owner and president of the team, my mom was one of the first and only women to have her name engraved on the Stanley Cup. For my mom, hard work wasn’t just going to the office and putting in a full workday, it was putting in work with her family too. She was an unbelievable mother, getting us out the door for school, going to work, gathering us back up, and cooking five nights a week, at least, for her family and for her father. She did so much on both ends of the spectrum. And I think the biggest thing that I have learned from my mom is that you can work very hard in your day job, but you can work very hard at home too. And I try to bring that sort of reality to my life.

On the family legacy at Notre Dame and building the 49ers

My grandfather, Edward DeBartolo Sr., grew up in Youngstown. He was a smart kid but didn’t really enjoy school, so he would help his stepfather with a lot of construction jobs. His mother came to him one day and called him the Italian word “chooch,” meaning idiot, for not wanting to go to college. So he packed up his stuff, and they sent him on a train to South Bend, Indiana. Turns out, Notre Dame doesn’t just accept you because you show up at their doorstep. So he ended up attending community college in South Bend while working construction, until he made his way into Notre Dame. He finished college at the top of his class. That experience got him to see the world beyond Youngstown, Ohio. I was honored when my grandfather gave me his graduation ring when I made my First Communion.

His son, Eddie Jr., went to Notre Dame too, and his daughter, my mother, went to Saint Mary’s [College], the all-girls school. She met my father at a blind-date party at Notre Dame and they went on to get married. I was the first person of the next generation to go to Notre Dame.

My uncle, Eddie Jr., is in the NFL’s Hall of Fame, and he is an icon in the game. I think he really changed what it meant to be an owner. He just had such passion. He took care of people. He ran the 49ers from ’77 to ’99, and his hallmark was making a family culture out of the team. I’ve tried to live up to that legacy that he started. This means really taking care of the folks that work for you and making it more than just a transactional partnership. I want to make sure people feel like they’re at home and they have a family at the 49ers.

“To me, football is a reflection of American life.”

Football is a very complicated sport. There are so many things that revolve around success, and it’s not related to one specific person. Even if you have the best player in the league, that doesn’t mean you have the best team. The more that you understand the nuances of football, you can see how special it is.

It is the daily grind of it — the “three yards and a cloud of dust.” The grind of the offensive linemen — they’re so very important, but the joke is, “You don’t know an offensive lineman’s name, until they make a mistake and somebody sacks the quarterback.” They are the day-to-day workers that you see in America. You have the quarterback with everything on his shoulders. When you win, it’s the quarterback; when you lose, it’s the quarterback. And that is like your titans of industry, your senators, your presidents — the people that get all of the credit or all of the blame, even though there are so many other people that helped. And then you have receivers and running backs; they are sort of in the middle class. So the football field has everything. All different walks of life come together, and I think that’s powerful for people.

There’s never a perfect game in football. There’s always a mistake somewhere. But what do you do with it? How do you get better from the mistakes that you made in the first quarter? What is so beautiful about the game of football is that you can call the right play, and everything can seem to be working out, but somebody can drop the ball. I think that’s life in general.

“We were the first professional sports team in San Francisco, and you feel that.”

Our fans have been passionate about the team since 1946, when it was founded by Vic and Tony Morabito. We were the first professional sports team in San Francisco, and you feel that. I hear people that are in their 70s, 80s, and even 90s talk about getting Christopher Milk [kids’ discount] coupons and going to games. And they would walk to the game from their neighborhood in San Francisco to the stadium area next to Golden Gate Park. These fans were there watching as the team began building and growing and expanding. We had some success in the early ’50s; we had a little bit of success in the early ’70s, where we got to the championship game against the Dallas Cowboys, and the Cowboys beat us several times. And then, when we got to the NFC Championship game, the ’81 season in January of 1982, when we beat the Cowboys, and “The Catch” occurred — the throw to Dwight Clark. It meant so much because we had lost to that team for so long, in that game and in other games. That brought a community together, and that win, it made people feel special. I think that’s what sports is able to do. That feeling is there. People remember those times. They remember the 49ers bringing you out of the darkness.

I look at the stadium today as sort of the last bastion of that town square, where you don’t know who you’re sitting with; you don’t know who else is there, but we’re all here together for a common purpose. When we built Levi Stadium, we wanted it to be a dedication to what makes the Bay Area great. We wanted it to be an outdoor experience and a forward-thinking stadium. It is a software-driven stadium. We built a green roof on our suite tower, which highlights our commitment to sustainability. We are the only stadium in the northern hemisphere that’s net neutral to the grid for all of our home games. We also wanted to convey a historical feel for the team because we’ve been one of the most prominent teams in sports, and we want to celebrate it. We have our heroes front and center. We’ve built life-size statues of them. You can actually go take a picture next to Bill Walsh’s statue or Joe Montana’s statue or Ronnie Lott. We also have the “Star Wars” wall, where anybody that’s played for the 49ers, even for just one game, is highlighted on the wall. You want to preserve the history of the 49ers. These are all the people that have suited up and have contributed to the 49ers.

On football as a platform for conversation and social justice awareness

We want to use our platform as a sports team to do more than just win games. We want to help the community. I’m proud of our STEAM [Science, Technology, Engineering, Arts, and Mathematics] education program, which inspires young kids to learn. We want it to be an accessible program for all of the area’s youth so we cover the cost of transportation and make sure that they have a good meal during their visit.

Some of our efforts in the community aren’t always well-received by everybody. We have players right now that have been taking a knee during the anthem and protesting. I wouldn’t take a knee during the anthem; that’s not my stance. But we live in America, where the First Amendment is very, very important to me, and I think it’s important to back our players when they’re trying to gain awareness for social justice causes. We are trying to help our guys bring that message front and center and actually make progress in social justice awareness. It certainly isn’t popular with everybody. But sports is a platform that can help make our country a better place. I will fight for that. I’ll fight with our players for that. We have so much impact as a professional football team that we actually can help shift people’s views on diversity, on race, on social issues in America — topics that we don’t talk about. And I think we can help America become a better place by raising awareness to those issues. 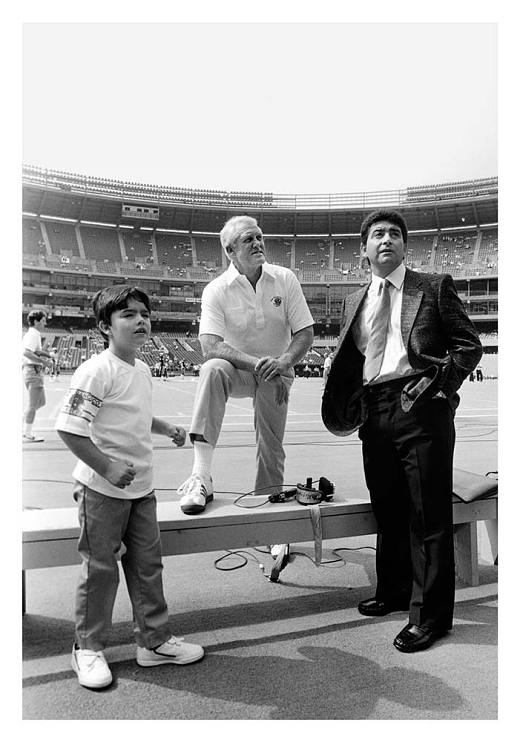 Young Jed York on the sidelines during pregame at Heinz Stadium with Coach Bill Walsh and Eddie DeBartolo Jr., September 1987 in Pittsburgh, PA 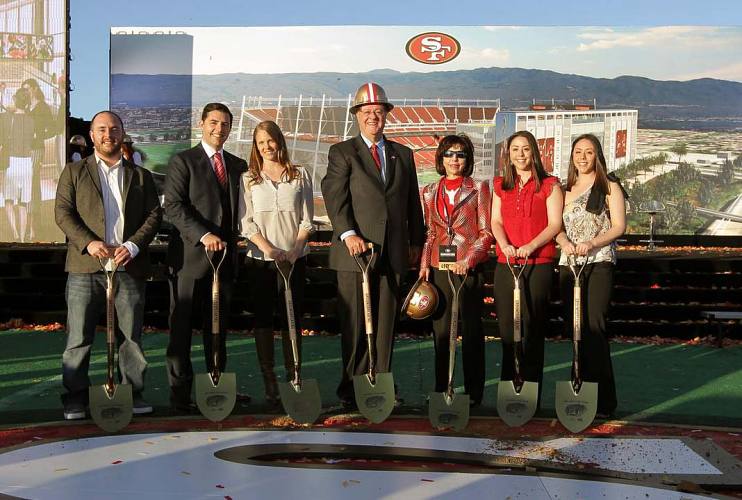 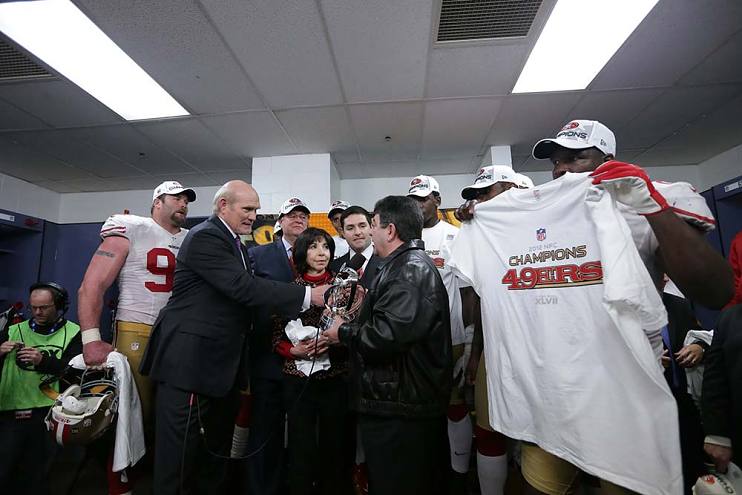 Jed York postgame in the locker room at the Georgia Dome following a victory against the Atlanta Falcons to become the 2013 NFC Champions, with Denise DeBartolo York, John York, Eddie DeBartolo Jr., and Terry Bradshaw. January 20, 2013, in Atlanta, GA. 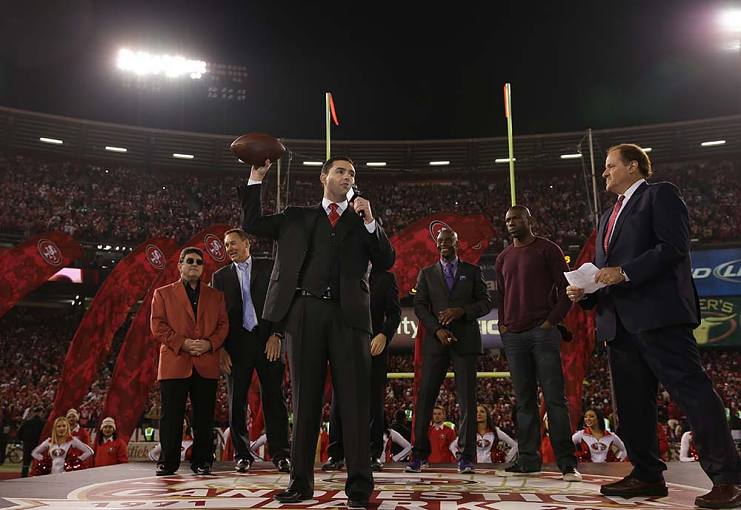 Jed York on December 23, 2013, in San Francisco, CA. This was the last game at Candlestick Park. Halftime presentation with 49ers Hall of Famers Eddie DeBartolo Jr. and Chris Berman. 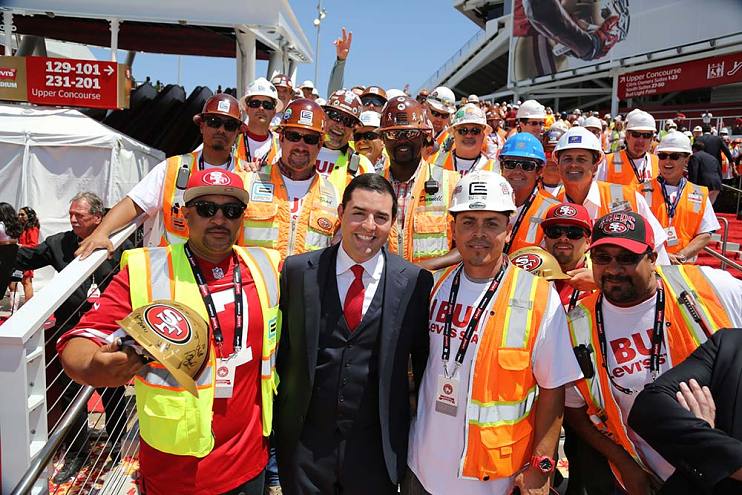 Jed York at the Levi’s Stadium Ribbon Cutting Ceremony with over 200 construction workers from the building project that participated in the event. July 17, 2014, in Santa Clara, CA. 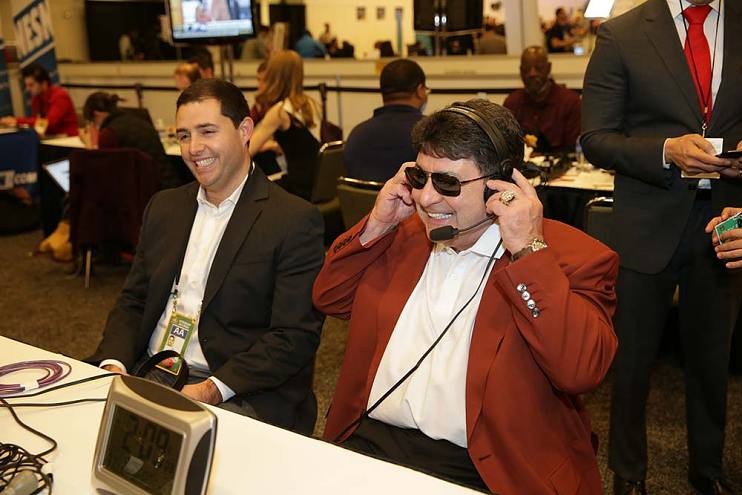 Young Jed York on the sidelines during pregame at Heinz Stadium with Coach Bill Walsh and Eddie DeBartolo Jr., September 1987 in Pittsburgh, PA

Jed York postgame in the locker room at the Georgia Dome following a victory against the Atlanta Falcons to become the 2013 NFC Champions, with Denise DeBartolo York, John York, Eddie DeBartolo Jr., and Terry Bradshaw. January 20, 2013, in Atlanta, GA.

Jed York on December 23, 2013, in San Francisco, CA. This was the last game at Candlestick Park. Halftime presentation with 49ers Hall of Famers Eddie DeBartolo Jr. and Chris Berman.

Jed York at the Levi’s Stadium Ribbon Cutting Ceremony with over 200 construction workers from the building project that participated in the event. July 17, 2014, in Santa Clara, CA.