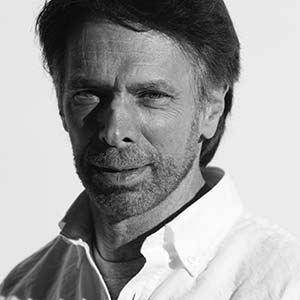 “There’s so much demand for content today – whether movies, television, cable or internet shows – they’re all vying for your eyeballs.”

Jerry Bruckheimer of Jerry Bruckheimer Films and a producer of Armageddon, Black Hawk Down, the Pirates of the Caribbean films, and the television series CSI: Crime Scene Investigation, CSI: Miami, CSI: NY, and the U.S. version of The Amazing Race, among others; excerpted from an interview with the National Museum of American History, October 19, 2016.

“It takes on a special feeling coming from an immigrant family”

It takes on a special feeling coming from an immigrant family. First of all, both my parents had to escape the Nazis. My father came to America in the late 1920s, and my mother in the 1930s, just as Hitler was starting to take power. My mother came from a family of 14 children, and was the youngest girl. She was brought over by my uncle, who became one of the biggest restaurant suppliers in Detroit. He brought his brothers and sisters over from Germany, and my mother was his bookkeeper. My father was brought over to the U.S. by a cousin, and he worked in a very exclusive ladies shop in downtown Detroit. He was a very dapper man, spoke good English with a German accent, always dressed to the nines. My parents met through, I think, mutual friends in the German community in Detroit. The meaning of the success I’ve enjoyed is that it shows that immigrants can come to the U.S., make a successful living for themselves, raise their child and make sure he goes to college. It’s a great American story. I went on to create films and television programs which, I hope, will last in our history for a long time. So to anybody in another country who has a dream, there is a place for you, if you work hard. That’s what it’s all about.

I think that the German work ethic, at least the work ethic that I witnessed while growing up from my uncles, aunts and the rest of my family—and how hard my dad worked—instilled a really strong work ethic in me, which I still have today. I’m not happy unless I’m working very hard, and I think the harder you work, the luckier you get. Anybody who thinks they can come to Hollywood and just be able to jump into success, well, it doesn’t happen that way. I was never a good student. In fact, I was a terrible student, but I’m lucky to have something called emotional intelligence. As I’m dyslexic, I was never really a good book learner. But I guess struggling to read developed the creative part of my brain, because I had to use other ways to express myself.

I think my proudest achievement is the breadth of my career and the fact that we’ve been able, successfully, to do both television and movies. It’s rare that you have success in both. CSI has been the number one show around the world for many years. So the fact that we can take American values, American science, American storytelling, American actors, American writers and producers all over the world and be known for excellence…that’s quite an honor, that’s quite an accomplishment for a kid from Detroit from immigrant parents.

I love what I do. I come to work every day. Not every day is easy, because you do have bad ones. But a bad day for me is not the same as one for a doctor or someone who is saving lives. Entertainment is a fun business, and I’m very fortunate that I’m still in it.

“I know what I like and that’s what I do”

I think it’s easier now in some ways to get recognized because of the Internet. So a filmmaker can put up his little film, and if it’s provocative enough they could get a lot of hits, or somebody will recognize their talent and, hopefully, bring them to Hollywood. There’s so much demand for content today—whether movies, television, cable or internet shows—they’re all vying for your eyeballs. Which means we need more actors, more writers, more directors. And the ones who are the most talented are the ones who have, or will, become the big successes. You can now watch content any place, any time you want. You don’t have to be sitting in front of your TV at eight o’clock to watch your favorite show.

“What I love to do is what I call process television”

What I love to do is what I call process television, which takes you inside a world that you never otherwise would be a part of, and shows you how it actually works. When we did CSI, we brought in real crime scene investigators as our consultants, so that they could advise on exactly how they do their work. It was an inside look into a very interesting world, and through the impact of the show, we’ve been told by universities and other institutions how much demand there has been for students who want to become crime scene investigators. The same thing happened after Top Gun. Navy recruiting was up about a third after the film was released. We heard stories that recruiters would set up folding tables outside of theaters showing the film.

“‘If you want to send a message, go to Western Union’”

Samuel Goldwyn, the legendary producer, said about movies, “You know, if you want to send a message, go to Western Union.” We just want to entertain audiences, and within the entertainment, if we can give them something more, or something they can learn, that’s an added bonus.

We just want to tell dramatic stories about people who are interesting characters, but if we put across something more, that’s great. We did that with Remember the Titans and Glory Road. Children don’t really understand the racial divide we had in this country back in the ’60s and ’70s. It feels like yesterday to me, but like ancient history to them. They didn’t understand that white and black kids just couldn’t get along together. In those two films, we turned the individuals who helped to change all that into heroes.

“Education is the key to just about everything”

It’s so important to get an education and to continue that education no matter what it is. I self-educated myself on the film business because there were no classes at my university about film. I started my interest in film with a still camera as a boy. My uncle was an amateur photographer, and he would give me his old cameras. I started with a little 35mm camera when I was six years old, and began taking pictures. Later, when I became interested in movies, I would go to every film I could possibly, and read everything I could possibly read about the film business, and about storytelling. So when I had an opportunity to make the jump into film, I had already self-educated myself…not that you ever stop learning, because technology is constantly changing. But I think education is the key to just about everything.

What’s important is to find something you love doing that you’re good at. Now, that’s a tough thing. I’d love to be an actor, but I’m not good at it. So you have to find something that gives you the inner glow, when you feel you’ve accomplished something that makes you feel good. And if you find that thing and it matches up with your talent, then that’s something you will have for the rest of your life, like myself. A lot of people settle for things because the money’s there. I had the opportunity when I was young to work with one of my uncles. He was going to pay me a lot of money to work with him, but the job wasn’t something that I loved doing, so instead I started working in a mailroom of an advertising agency for 50 dollars a week. I had a vision of where I wanted to go. I was the hardest working kid in the mailroom, and would do favors for different people in the television division, which made the head of the mailroom look good. So when somebody asked him, “Who’s your hardest worker?” I got kicked out of the mailroom and got a job on the next level. 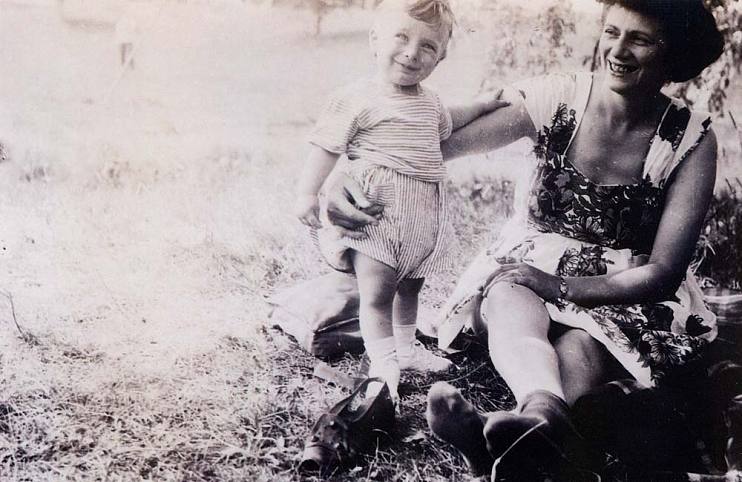 Jerry Bruckheimer and his mom, Anna, circa 1944, in Detroit, MI 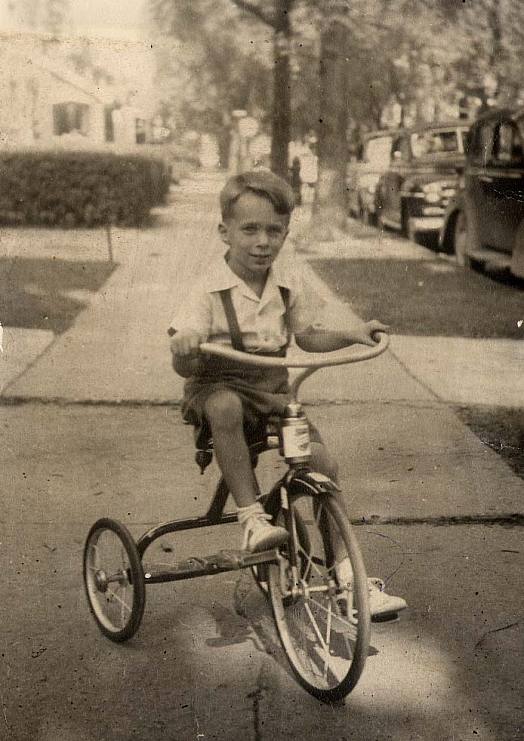 Jerry Bruckheimer as a child in Detroit, circa 1948 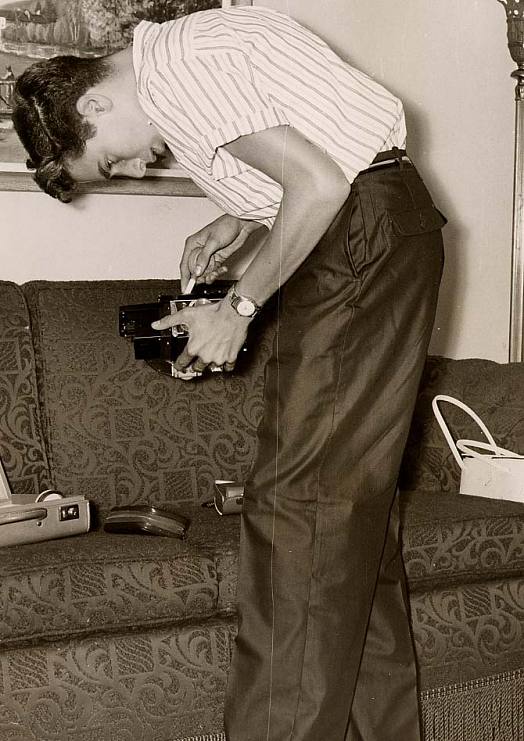 Jerry Bruckheimer has always had an interest in photography and film.  Here is Bruckheimer with his first camera, circa 1955. 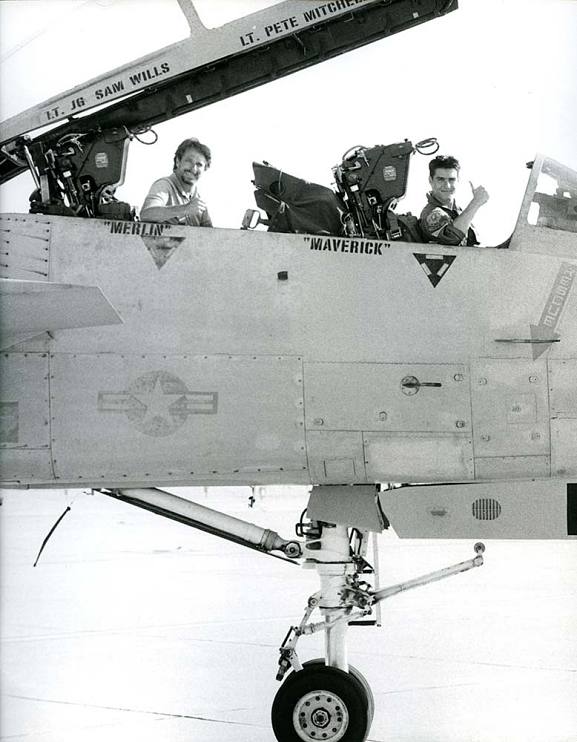 Jerry Bruckheimer and Tom Cruise give the thumbs up on the set of Top Gun, 1985 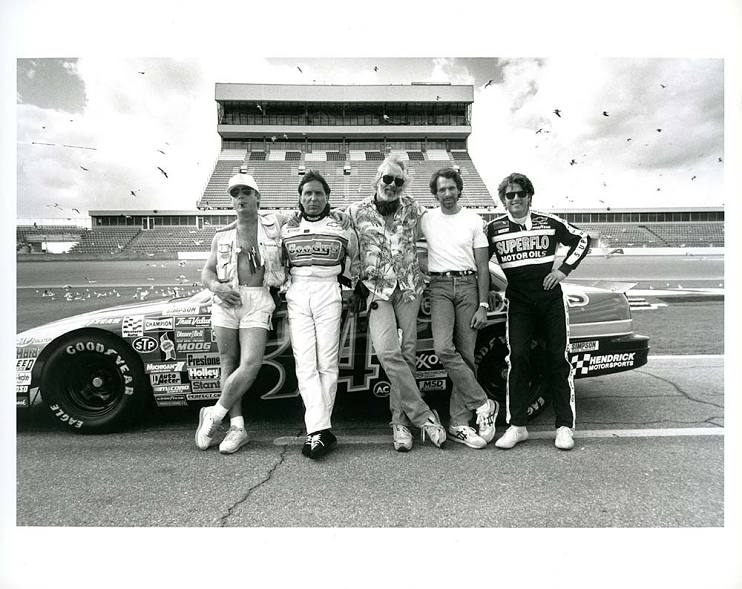 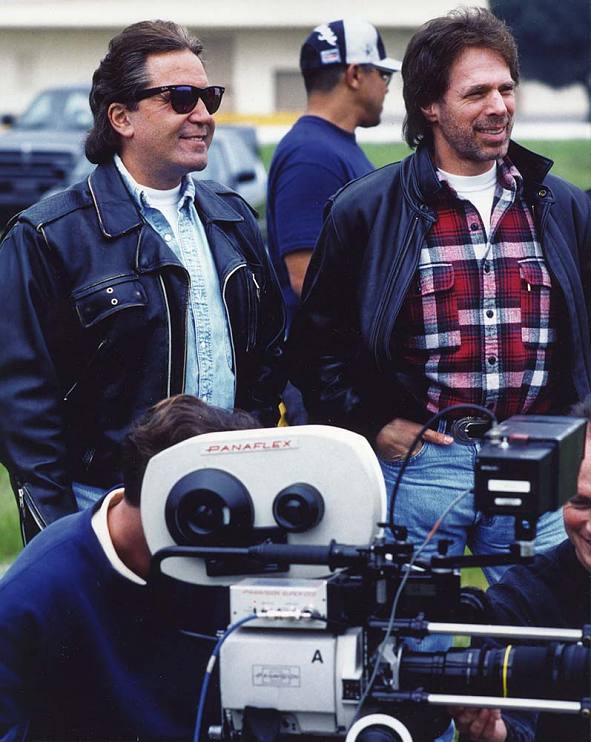 Don Simpson and Jerry Bruckheimer on the set of Bad Boys, 1994. 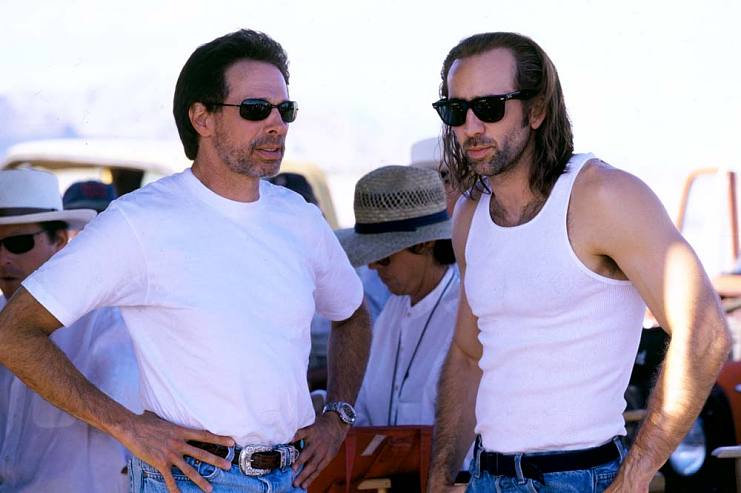 Jerry Bruckheimer talks to Nicolas Cage on the set of Con Air, 1996

Jerry Bruckheimer on the set of the war epic Pearl Harbor, 2000 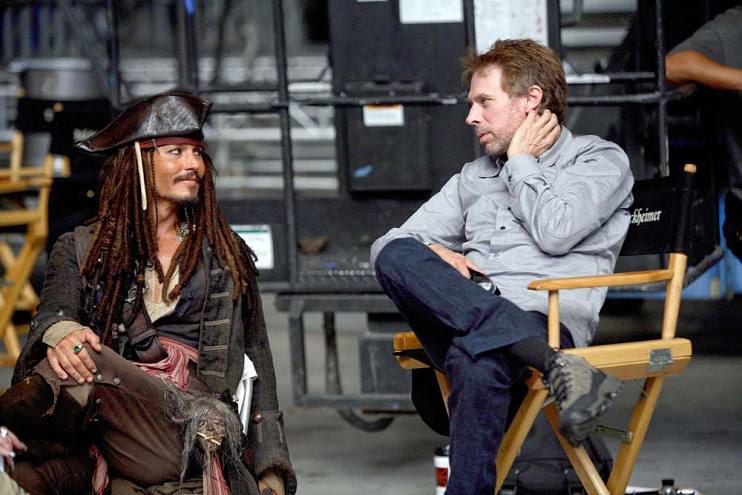 Johnny Depp in character as Jack Sparrow talks to producer Jerry Bruckheimer on the set of Pirates of the Caribbean: Dead Man’s Chest, 2005 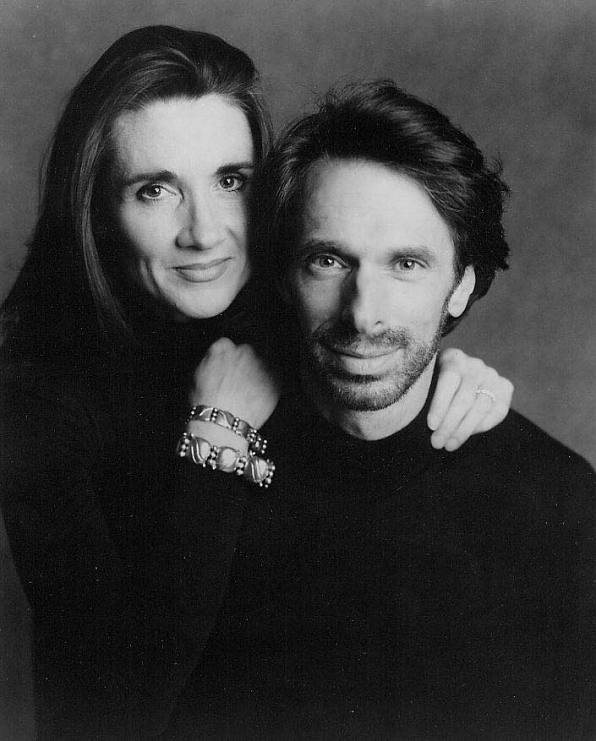 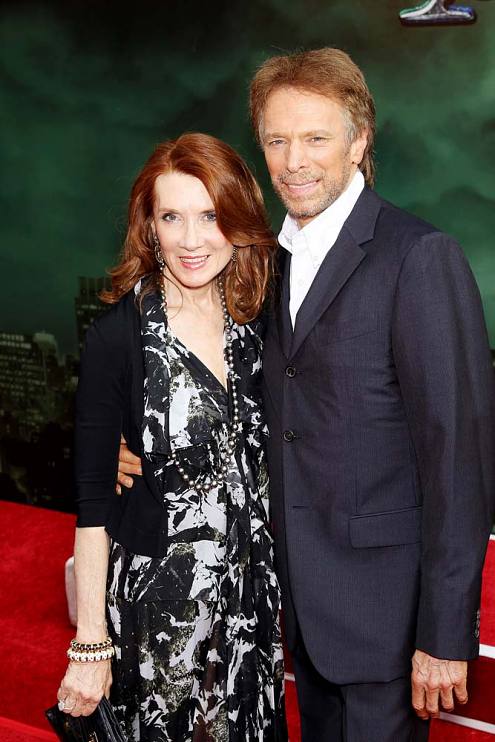 Linda and Jerry Bruckheimer attending the premiere of The Sorcerer’s Apprentice, 2010 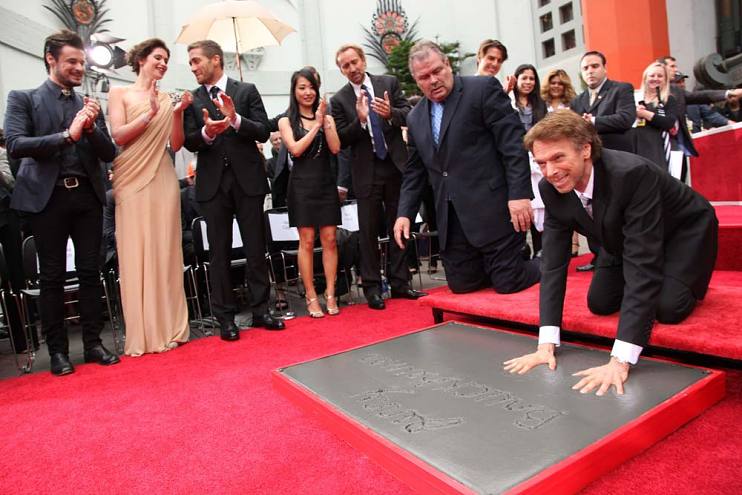 Jerry Bruckheimer being honored at a Hollywood Chamber of Commerce ceremony, Hollywood, May 17, 2010. Attendees include Gemma Arterton, Jake Gyllenhaal, Nicolas Cage, and Tom Cruise, among others.

Jerry Bruckheimer and his mom, Anna, circa 1944, in Detroit, MI

Jerry Bruckheimer as a child in Detroit, circa 1948

Jerry Bruckheimer has always had an interest in photography and film.  Here is Bruckheimer with his first camera, circa 1955.

Jerry Bruckheimer and Tom Cruise give the thumbs up on the set of Top Gun, 1985

Don Simpson and Jerry Bruckheimer on the set of Bad Boys, 1994.

Jerry Bruckheimer talks to Nicolas Cage on the set of Con Air, 1996

Jerry Bruckheimer on the set of the war epic Pearl Harbor, 2000

Johnny Depp in character as Jack Sparrow talks to producer Jerry Bruckheimer on the set of Pirates of the Caribbean: Dead Man’s Chest, 2005

Linda and Jerry Bruckheimer attending the premiere of The Sorcerer’s Apprentice, 2010

Jerry Bruckheimer being honored at a Hollywood Chamber of Commerce ceremony, Hollywood, May 17, 2010. Attendees include Gemma Arterton, Jake Gyllenhaal, Nicolas Cage, and Tom Cruise, among others.

On the “Miracle on Ice” jersey

Well, it’s of course the jersey for the 1980 United States men’s hockey team, which I think is a great story because we were underdogs and won the Olympics.

A bunch of young ice hockey players who thought they could never accomplish anything went out and beat the favorites. I was watching the game on television, and it was a great moment. The grace and the speed of those young American players, part ballet dancers and part violent. It’s difficult to play ice hockey because you’re on less than a quarter of an inch blade, and moving at 30 miles per hour. It’s a really skilled sport, as tough as football. Basketball players are at least still in shoes, which is much easier than being on a blade!