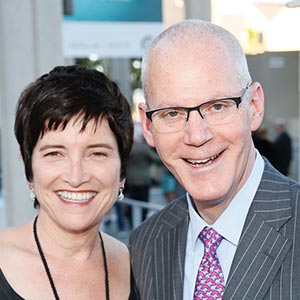 “The arts are evolving to a place where more connection is possible now, especially with a younger generation.” —Kiki Ramos Gindler

“We believe the arts truly have transformative power. We see that from our own lives and how the arts shaped us, and we see that every day through our involvement with the arts organizations we support.” —David Gindler

Kiki Ramos Gindler, President of the Board of Directors of Center Theatre Group, and David Gindler, partner at Milbank LLP and Head of the Intellectual Property Litigation and Licensing Group. Kiki and David are leading performing arts philanthropists in Los Angeles. Excerpted from an interview with the National Museum of American History, February 15, 2019.

On childhood experiences with the arts

Kiki: I am the only child of immigrant parents. They were far from affluent, but the arts were such a part of their lives that it became central to mine at a very early age. Growing up in Los Angeles meant planned outings every weekend, often to Olvera Street in downtown LA—the site of the city’s birthplace—sometimes to Knott’s Berry Farm and Disneyland, but just as often to the Huntington Library, the Getty Museum, and the Los Angeles County Museum of Art. These were my favorite places growing up, always in rotation on Saturdays and Sundays after church.

My father was Mexican. My mother was Canadian. My dad played the accordion, the piano, and the guitar. Both loved classical music, and my mom was a huge fan of opera as well as classic English and Scottish literature and poetry. My dad also taught me how to draw, paint, and sculpt. Music and art filled our house.

I grew up with my cousins on my dad's side. When we got together on the weekends, we would often re-enact plays of our own making and movies. One of our favorites was The Wizard of Oz, over and over. My older cousin (who became a playwright and theatre director) always cast me as Toto, which was great for me because I loved dogs.

David: I grew up in the West Valley, in Woodland Hills. The greatest impact on my life today was made by my public education, where the arts were really a vibrant part of the curriculum, particularly in junior high and in high school.

I took an elective course in orchestra in seventh grade. I chose to play the bass, and I kept with it through graduation from high school. That was sort of the beginning of my exposure to classical music. I became the seventh- and eighth-grader who listened mostly to classical music, and when I got a driver's license, a date with David meant driving downtown to the Dorothy Chandler Pavilion to see the Los Angeles Philharmonic—which made my dating circle somewhat smaller than it otherwise might have been.

From punk to opera

David: We met at Pomona [College]. It’s a small place where everyone knows each other, and for that reason, I could not get a date with Kiki until I graduated because she had a rule about not dating people who went to the same college. I was a patient man.

Kiki: We attended college at the moment punk and new wave started taking over the music scene, especially college radio. Pomona had a 3,000-watt station, KSPC, which still exists today. I knew at the very beginning of freshman year I had to be a part of it. I immediately started as a DJ and eventually became Music Director and then succeeded David as Program Director. When David was Program Director, he changed the station sound to all alternative music, which got KSPC on the radar screen of all the record labels producing alternative bands. I remember when we got the first U2 album and the cover just said, “U2 Boy.” I thought, What is the name of the band? Is it U2? Is it Boy? Is it U2 Boy?

David: Since then, Kiki and I have cross-pollinated each other's lives in terms of the arts we love. For example, I never grew up seeing much opera, but Kiki did, and so I have learned to love it. I now serve on the board of Beth Morrison Projects, which is an organization that fosters the cultivation of contemporary opera.

On genre bending and the influence of technology

Kiki: Today, everyone is sampling and responding to each other's work, and musical styles are blending. I used to categorize my personal music collection by particular genres, and it's getting harder to do that because you have to ask, “Is this a classical artist, or is this classical-folk crossover? Is this alternative rock-classical?” Artists will draw on the tradition of a particular genre, but they are bending that tradition in really exciting ways. One of the things I'm seeing is so much cross-pollination between New York and LA artists. I think there’s a lot of fluidity, now more than ever before, because of technology.

At this time in our development as a nation, because of digital media, people tend to go into their device and not connect with other people. A lot of entertainment is now available on a device where you just experience it alone. But the performing arts provide a vehicle that enables us to reconnect with each other.

The arts are evolving to a place where more connection is possible now, especially with a younger generation. They're looking for something that is more of an experience—so it's an interesting irony that while this generation may be more connected to their personal devices, they are also the ones driving a lot of the conversation among those who make art.

David: I joined the board of Antaeus [Theatre Company] toward the end of 2009, because I thought it was an extraordinary organization. At the end of our second season, we produced a new version of the Nöel Coward play called Peace in Our Time. The play is almost never produced because the number of speaking roles makes it wildly expensive.

When I saw it, I thought, That is the most impressive performance we've ever done, and we will never do something like this again in our space because the space is too small to economically support a play of this scale. And so we needed to build our own theater to support that level of quality and artistic vision. I said to the company, "I'll go and get the money if you bring the art." That began a process of raising money, and Kiki and I made an anchor gift.

“It is not because we want to get a better parking spot.”

David: As young professionals in Los Angeles, we reached a turning point when we started to become serious performing arts consumers. We became subscribers to a variety of arts organizations—music and theatre—and we were seeing a lot of things. Then we started donating to these organizations and eventually I was asked to become the board chair of the Los Angeles Master Chorale. Kiki joined the Center Theatre [Group] board, and that was the beginning for her becoming a true thought leader in the nonprofit performing arts world. She has just become this extraordinary force of nature in that world.

It was around that time that we really changed our lives and began to think more deeply about making large impactful gifts together. We decided to make very significant gifts during our active working lives, out of current income, and to participate in having an impact now.

Kiki: Getting to know the artists makes the connection more personal, and somewhere along that line of giving, something magical happens where it moves from being transactional to—it's almost like, to be bold, a spiritual practice. You have a community.

David: We believe the arts truly have transformative power. We see that from our own lives and how the arts shaped us, and we see that every day through our involvement with the arts organizations we support. At its core, it's why we do this. It is not because we want to get a better parking spot. It's because we think we're having an impact in such a positive way.

“Even at the edges, we will make every effort to restore what's been taken away.”

David: There is something unfortunately missing in Los Angeles and across our country that I really wish would come back. There is no more orchestra in your average public junior high or high school. There is no longer any public allocation of funding to support regular field trips to experience a theatre or other performance. When that's missing from public education, you have stripped cultural literacy from our public discourse. It is a profound loss, and we've already had an entire generation raised without exposure to the arts in public education. In my view, our society has allowed a holocaust on the arts to happen across our public schools. I cannot tell you how much this disturbs us, and it's one of the reasons why, in any little way that we can, we want to make a difference. Even at the edges, we will make every effort to restore what's been taken away.

Kiki: The performing arts will always need more money just to continue the status quo. With commercial organizations, you get efficiencies of scale. So if you make widgets, you can find more efficient ways to make widgets, but, for the performing arts, if you're going to play Beethoven's Ninth Symphony, you will always require a specific orchestration. You will always require a specific number of instruments and people to make that art happen, and by definition, when you look at the structural economics of that artistic enterprise, the cost of labor always goes up. So that gap must be filled by philanthropy. 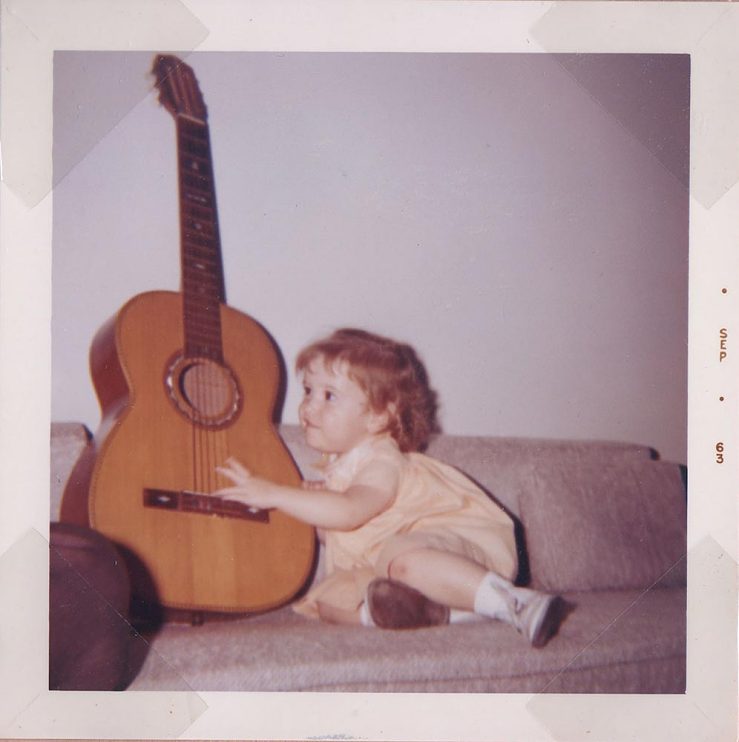 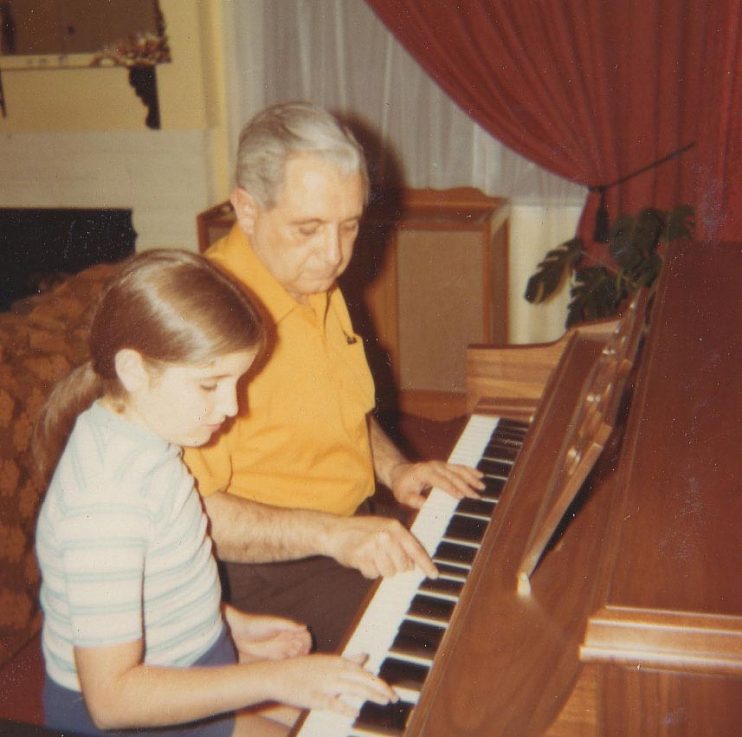 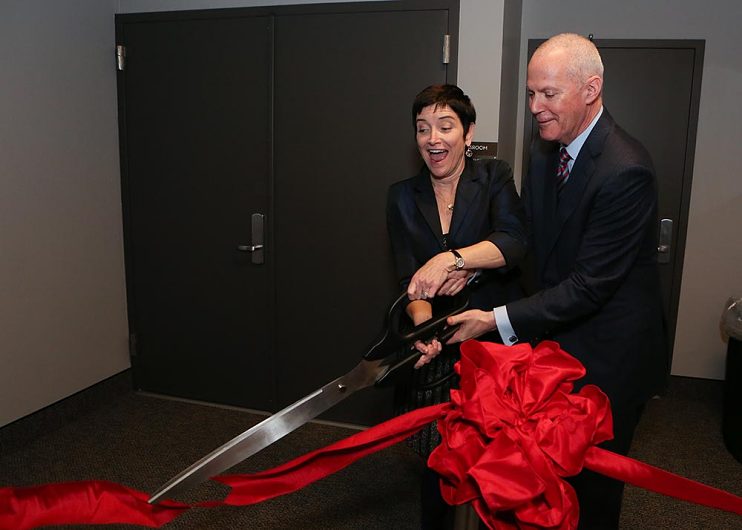 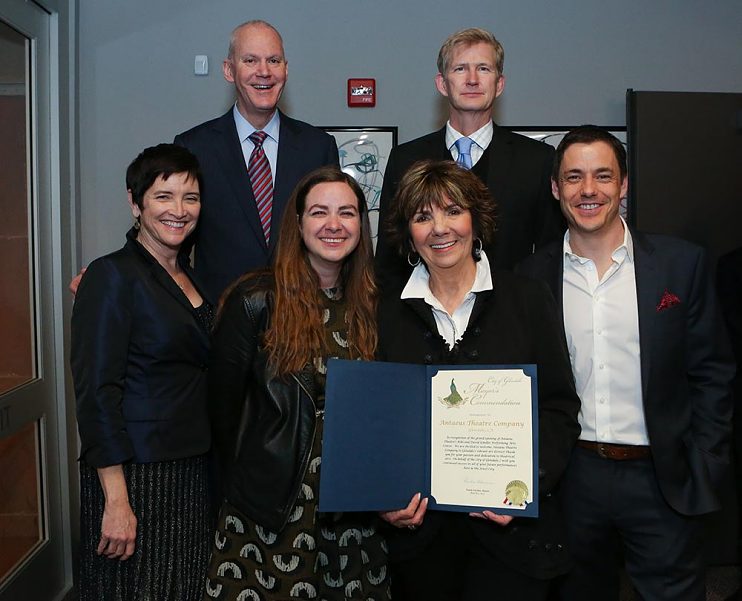 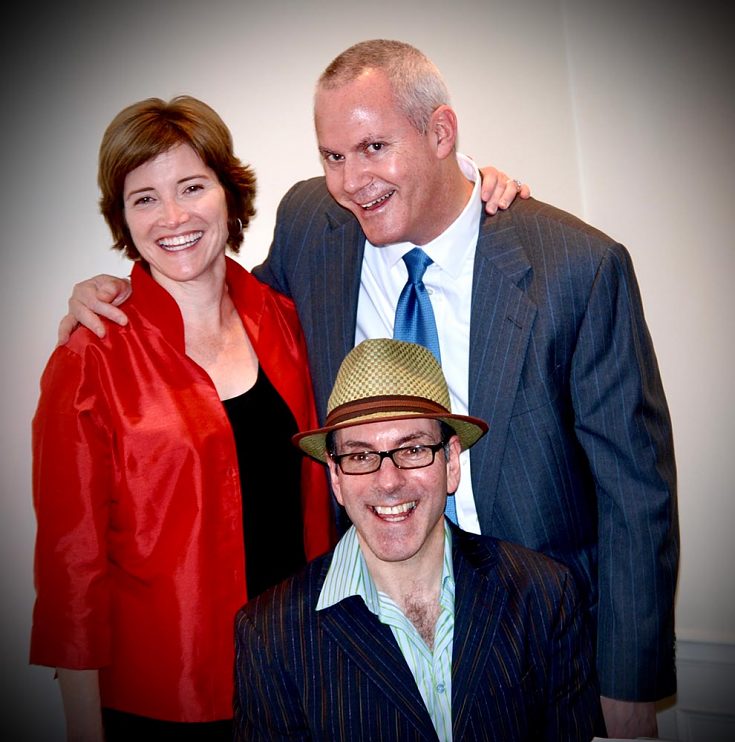 All about the artists — Kiki and David with commissioned composer and friend, Ricky Ian Gordon, on his birthday — May, 2008 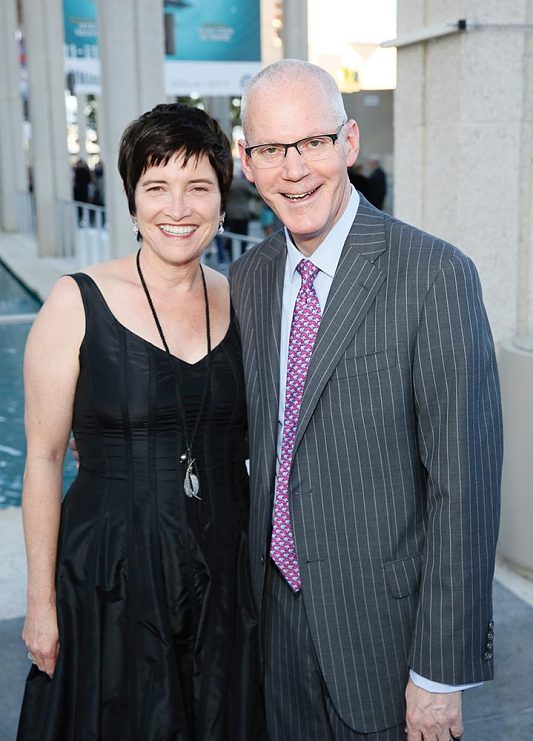 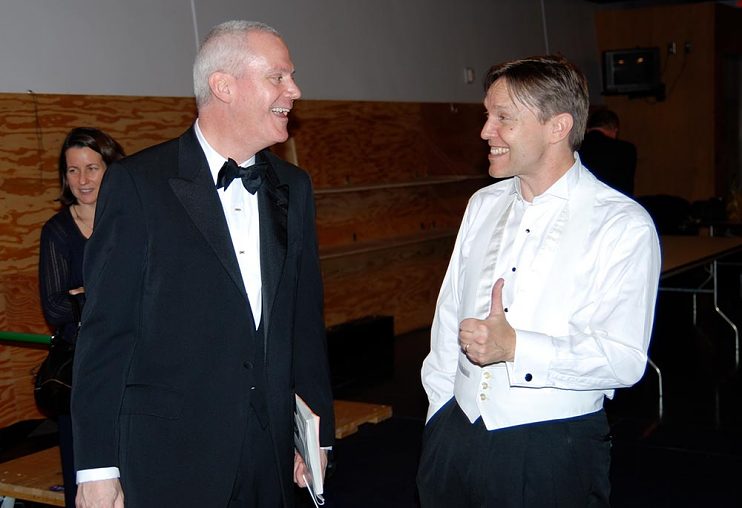 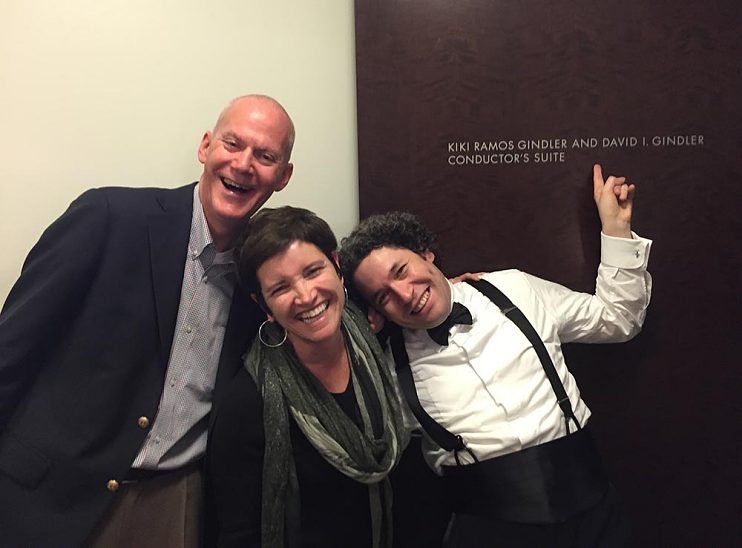 Backstage at the Hollywood Bowl’s conductor’s suite with Gustavo Dudamel, Music and Artistic Director of the Los Angeles Philharmonic — July 2015 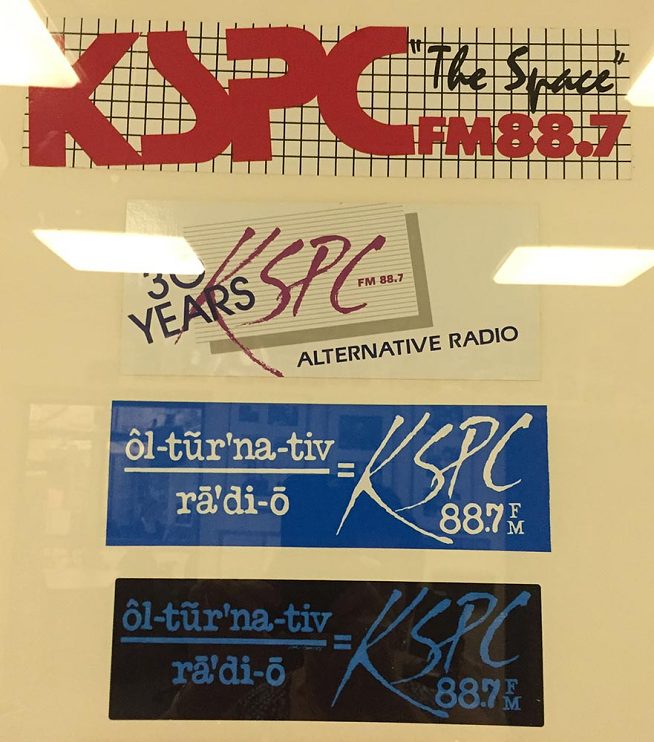 If only these walls could talk — poster art at KSPC FM 88.7, Pomona College, Claremont, California

All about the artists — Kiki and David with commissioned composer and friend, Ricky Ian Gordon, on his birthday — May, 2008

Backstage at the Hollywood Bowl’s conductor’s suite with Gustavo Dudamel, Music and Artistic Director of the Los Angeles Philharmonic — July 2015

If only these walls could talk — poster art at KSPC FM 88.7, Pomona College, Claremont, California

Kiki: Those slippers, of course, have resonance. Misty Copeland is from Southern California and African American. When she was just fifteen, she won first place in The Music Center's Spotlight program in downtown LA. As an Angeleno and person of mixed ethnic background, that has a very direct connection for me.