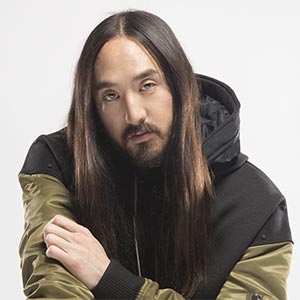 “Music was my source. It gave me purpose and passion, a sense of ownership I had never experienced before.”

My mom came from Japan at a very young age to help my father, who started Benihana's in New York. When I was one year old, my mom wanted to go to the other side of the country, so we plopped down in Dover Shores, a suburb of Newport Beach. I was raised into the skate and surf culture. It was definitely my outlet before I found music.

As an Asian American growing up in a community that is 96 percent white, I was always trying to find ways to understand how to fit in and how to be a part of a different culture. My mom was trying to raise me in a culturally Japanese way. She was always trying to protect me by saying, "Just don't rock the boat." It is an obedience thing. You follow the rules. If someone picks on you, you submit. If someone makes fun of you, you walk away. You do not raise your voice.

So I was confused. Fast forward to middle school and high school. I was a failure in academics. I was a failure at meeting friends and being part of a social community. My mom kept on pulling me out of schools and putting me in new ones to help me find a way.

My father was a superhero in my eyes. I didn't understand how an Asian man could be so liked by people outside of his own ethnicity. He was accepted, and what he was doing was affecting popular culture. He was in New York, but he would fly over, whisk me under his arm, and take me to hot-air balloon races, restaurant openings, the glitz and the glamour. I was this little kid with bright eyes thinking, Oh my God. This is insane.

Then I found this scene called the straight edge hardcore. I was in class, and there was a student sitting right in front of me who started talking to me. He had curly, blonde hair, and he was two years older. I was just this little 90-pound Asian boy, and I thought he was cool. He would always have on his Walkman and his headphones. One day, I asked him, “What are you listening to? The weirdest sound is coming out of your headphones.” And he said, “I'll make you a mixtape.”

This guy went out of his way to make me a tape. It had Fugazi. It had Shelter. It was the greatest day. I'll never forget it. I would listen to that mixtape every single day, morning to night. I learned all the lyrics. I found some other kids that would listen to it. I shaved my head because that's what straight edge kids do. I stopped eating meat. I started reading animal rights literature. I started going to shows. I was a size 26 waist wearing size 40 pants. I'm all in. This is my scene.

Music was my source. It gave me purpose and passion, a sense of ownership I had never experienced before. I was not taught to play music traditionally. My lessons came from this little high school scene. If you desire it, if you find passion in it, you will pick it up. My friends and I were all learning together. Then I got a Tascam four-track recorder, and my friend, Dan Senna, taught me how to record my first demo. I recorded guitar, drums, bass, and I sang.

The Pickle Patch was my apartment in college where I started putting on rogue shows. We were booking acts in my living room that held 40 people packed like sardines. It became a thing. You had to play there if you were a hardcore band, a punk band, or an indie band. Over 450 bands played in the variations of the Pickle Patch.

“Punk is a rebellion against the status quo”

I started to understand some level of social activism through my music. Punk is about being pissed off at the system. Punk is a rebellion against the status quo. Hardcore, the subset of punk, is more about finding solutions, brotherhood. We are going to get together. We're going to fight this together. The punk and hardcore scene is very American.

I went to UC Santa Barbara to follow my father’s footsteps and learn business. I started taking classes that gave me fire and made me look into history to understand the struggle of so many people. I was reading about the power of the community that would come together to fight injustices. I remember reading an autobiography of Malcolm X, and I was crying at the end.

I gained a sense that I could also help communities that do not have a voice. It was really a pivotal moment for me. I enrolled in sociology classes, I was in student groups, and I read books on the history of protest. Then it was time that I take that education and bring it to real life. The chancellor of UCSB announced that he would be taking some money from the ethics studies departments to fill in the potholes on campus. It was an outrage. My student group agreed that we needed to storm Chancellor Yang's office and tell him why he could not do that. And so we did. We stormed, 40 or 50 students, and we stayed there for over 20 hours. We changed history. The most influential people in the room were women, so I began taking more women's studies courses, and it was very enriching for me. I double-majored in women's studies and sociology.

On the transition from vinyl to digital

When I first started DJing, I was playing vinyl records on classic Technics turntables. It is a careful, methodical approach. You can't jump around; you have to keep everything stable. You are using the control of the needle and the manual to find out where your tempo is and to match the other tempo. When I am DJing with CDs, I am thinking four songs ahead. I already have one queued up. I am mixing in one quickly, and then I have another one ready to go.

I really cared about the process. The careful, methodical process of putting out a record was more than just, "Alright. Get it done. Make a few phone calls." It was an art project and another way to express myself.

At the end of the day, I am a creator. I like to create shared experiences. My creativity comes in strong waves, and I am a believer of flow. It is like riding a wave. Once you get on that wave and you are in that flow, you don't want to get off. When you are off the wave, it can take a long time until you get that beautiful set coming in and you can jump back on. Flow is everything.

My fans and followers are the reason I do what I do. I create music to create a conversation. You want to be surprised and to be uplifted from that surprise. I change it up by doing collaborations with different genres of artists from all over the world. Bangtan Boys, Daddy Yankee. I did my first Spanish-language track, “Azukita.” I love being able to change up my own musical process. It enriches the challenge.

On the Aoki Foundation

The Aoki Foundation has been around for five years. When I started doing bus tours, I thought, If we can pull one dollar for every ticket sold, we could create the idea that everyone is involved. You are partying, but you are also helping a cause. I think that is a good feeling. The Aoki Foundation is growing into a field that I am excited about, which is understanding the brain in order to eradicate degenerative brain diseases. 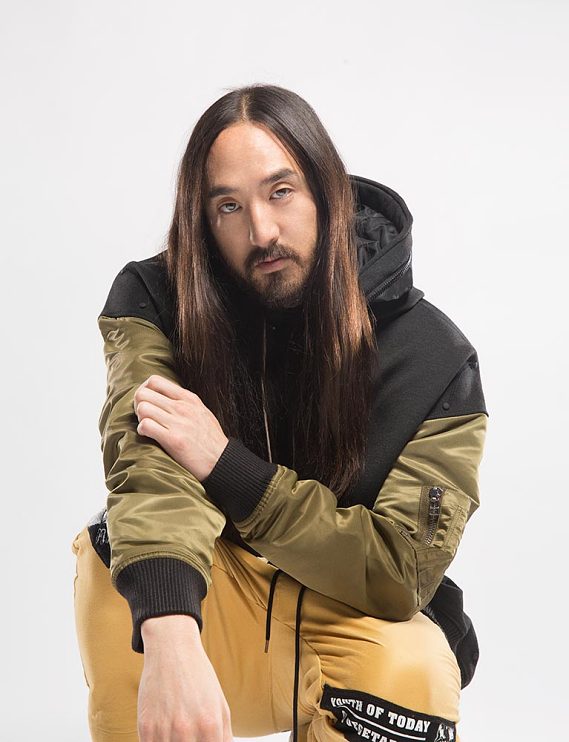 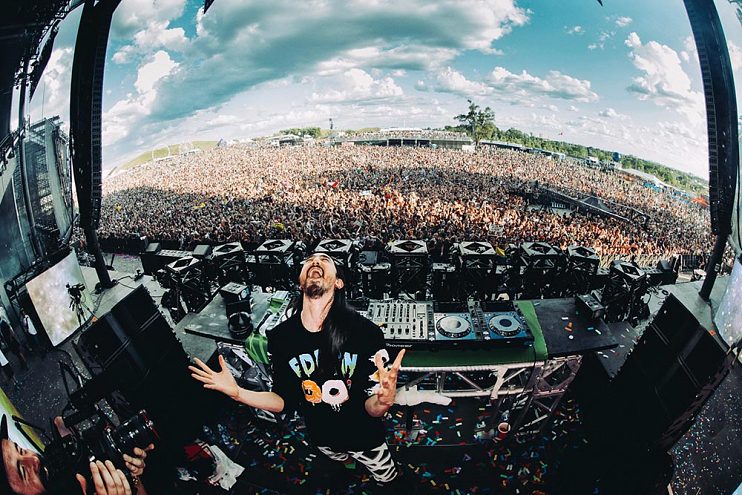 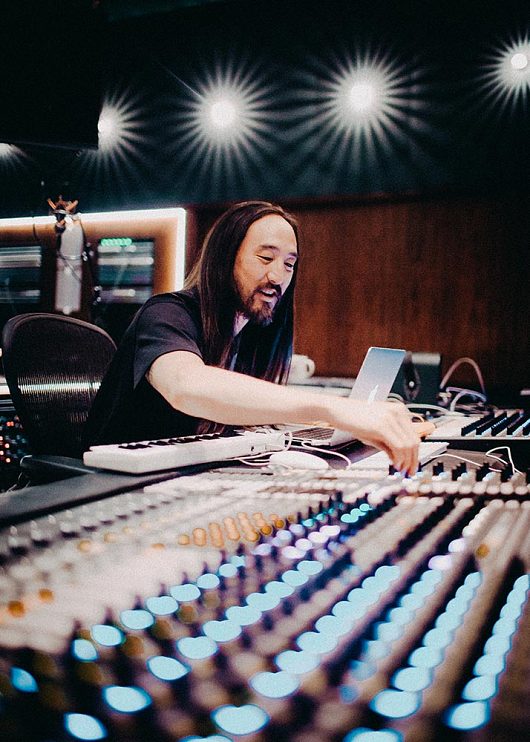 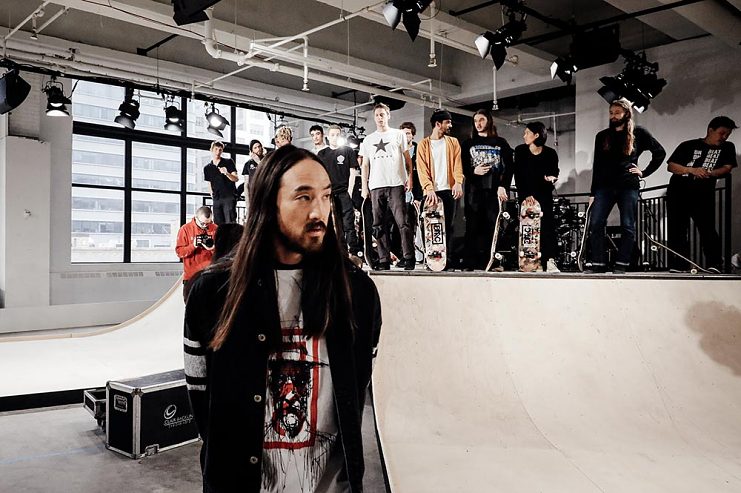 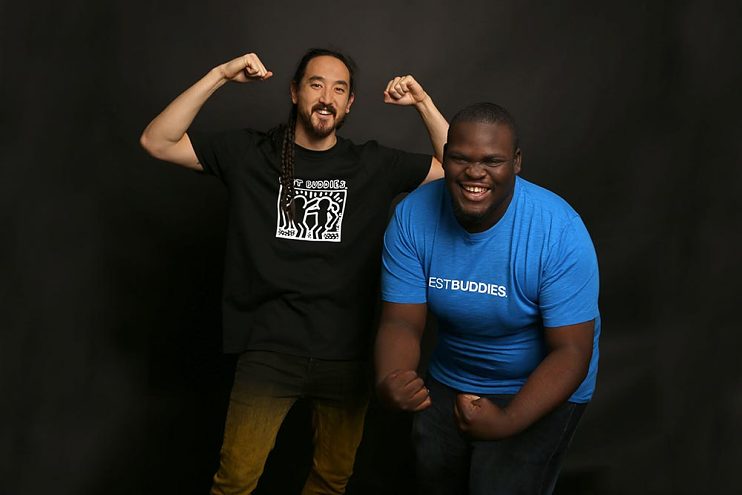 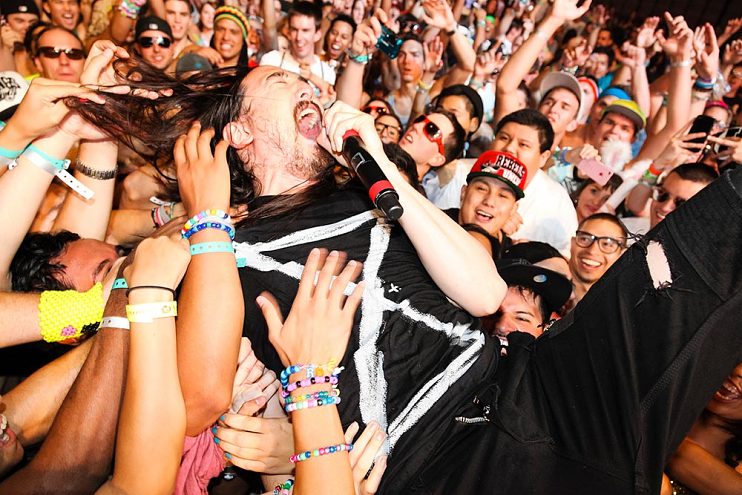 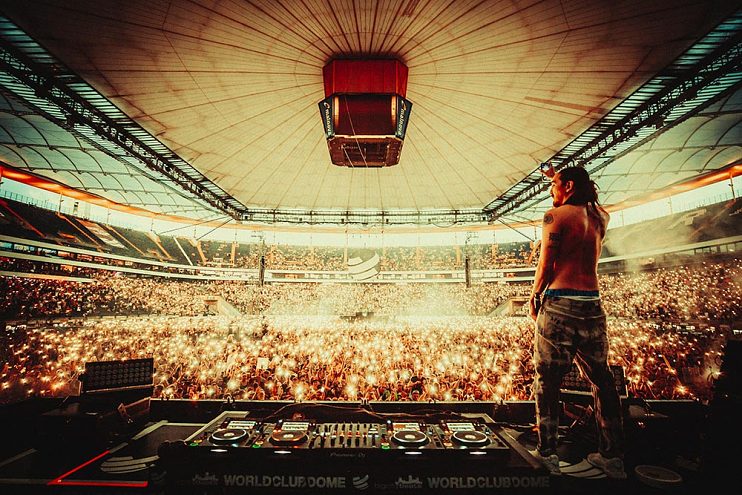 There is very little Asian influence in popular American culture. It is already typecasted. But Bruce Lee was beloved by everyone. He was Asian as Asian could be, and I identified with him so much. This was his last film, where he wore the yellow jumpsuit. He died in the making of Game of Death. My label was named Dim Mak because of my fascination for Bruce Lee. 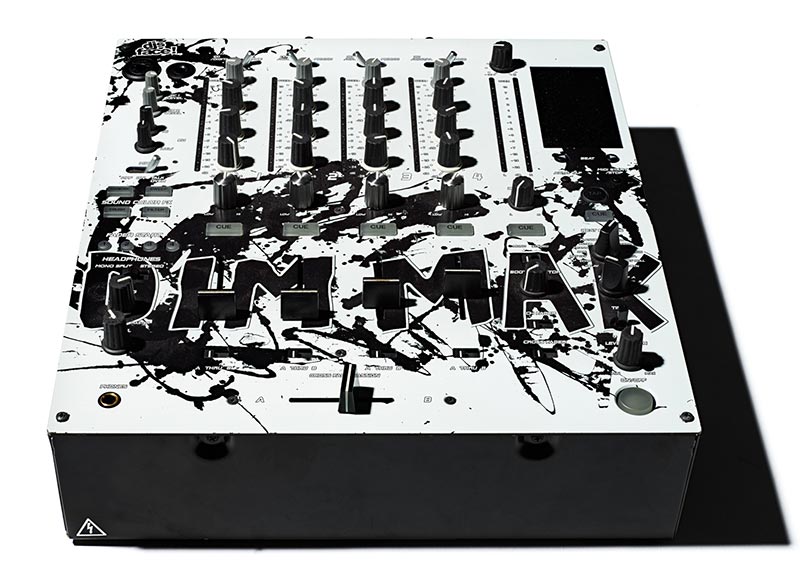 2008 was the era when I was playing this kind of electronic music called electro. Electro was very much punk by philosophy and ethos; it was the punk version of electronic music. The artists that were producing electro, we were severing ourselves away from electronic mainstream. We created our own exclusive world. It became extremely popular. It was all about distortion and guitar samples. It really struck my chord. When I see this, the mixer top, it strikes that same chord.