Of avatars and inventors

James Cameron’s Avatar was the box office smash to beat over the holiday season. The director of the Alien and Terminator franchises, Cameron has made CGI (computer-generated imagery) and other cutting-edge special effects his cinematic bread and butter. But, despite his reputation as today’s special effects master par excellence, I was not surprised to see this headline in a recent issue of Newsweek: “It’s The Story, Stupid: Directors James Cameron and Peter Jackson are the kings of new film technology. But they insist they aren’t slaves to it.” 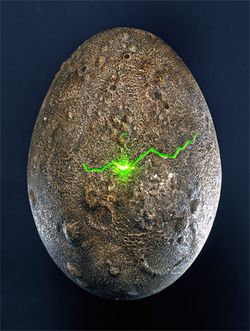 The 1979 movie Alien is a landmark in the tradition of science fiction motion pictures. This plaster of Paris egg is a central prop in the Alien narrative.

Well, of course. But despite the obligatory bow to filmic art, I confess that the overdose of F/X these days, especially the raucous variety, has me running to Netflix in search of the European art films of my youthful memory, shoestring productions blessedly free of most special effects (except for that magical opening scene in 8 1/2 where Marcello Mastroianni floats through the roof of his traffic-jammed car—it’s a personal favorite of mine). I sometimes find myself regretting altogether the arrival of the computer to the film scene.

At the same time, I tell myself to get real about the movies. Whatever our illusions about cinema, whether heavy on storyline and character, or suffused with CGI, it is important to recognize that all films are just that—illusions, and technological ones at that. There is a technological continuum from the Lumière brothers, through Thomas Edison and George Lucas, that eventually leads to Cameron’s Avatar. In fact, some of the cutting-edge effects of today are not all that revolutionary, at least in concept. For instance, much has been made of Avatar’s use of performance capture, a computer-generated animation technique to recreate the organic motion of humans and animals. Seventy years ago, Disney studios used rotoscoping based on the same principle, but employing, instead of computer technicians, an army of animators who manually traced the filmed motions of live actors. 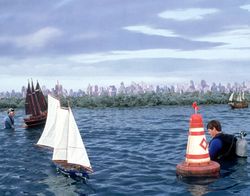 Martin Kline’s love of science fiction led him into designing motion picture special effects. He spoke at the Lemelson Center in 2000 about his work, and showed props and images from Stuart Little (1999), including this shot of the boat race set. Photo courtesy Martin A. Kline.

Over the years, the Lemelson Center has hosted many inventors and inventions from Hollywood. The late Stan Winston, Cameron’s frequent collaborator, told us what got him excited about the computer effects business and what it was like to work with Schwarzenegger and Cameron on the Terminator series. Marty Kline, the CGI genius behind such productions as Star Trek: The Movie, the 1970s TV series Battlestar Galactica, and Stuart Little, brought with him some of the physical models that were the platforms for his digital magic.

The movies are only one genre of artistic invention coming out of the Los Angeles area; musical instruments like electric guitars are another of the area’s surprising innovative products. So, what is it about Hollywood that has made it such fertile ground for innovation?

Art Molella is Jerome and Dorothy Lemelson Director of the National Museum of American History’s Lemelson Center for the Study of Invention and Innovation.