I'm going to save the world? The evolution of video/computer game packaging

Go on a quest for some nostalgia! Museum Technician Drew Robarge investigates a 1984 computer game that puts the player in control.

One of my research interests has been how specific groups of people have been represented in videogames, particularly people with disabilities. As a result, I became interested in studies of immersion in games, identity, and what makes the medium of videogames unique. When I was exploring the museum's videogame collection, I became intrigued when I saw myself in the packaging of one computer game called Sorcerer. There was a shiny, mirror-like design that actually reflected back a fuzzy view of my own face. The message was clever but clear: you're the enchanter/sorcerer who is going to save the world.

Boy, I sure hope they know what they're doing. 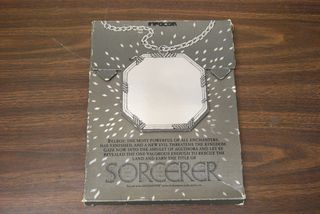 The box for the game with the "mirror"

What is this game that has summoned me? Sorcerer was a multiplatform computer game released by Infocom in 1984 and was the second game in the Enchanter series. The museum has the Apple II version of the game, but the game was released for at least 15 different computer operating systems. The game was written and coded by Steve Meretzsky who also created other interactive fictions such as The Hitchhiker’s Guide to the Galaxy and Planetfall.

As an enchanter, you seek to find your master, Belboz, who has mysteriously disappeared, and find out what happened to him. During your search, you explore the world and solve puzzles to advance further in your quest. There are no graphics in this game as it is an interactive text fiction. You use a text parser to give instructions to your player using specific verbs in conjunction with nouns like "Drink potion" or "Use torch on icicle." The introduction of graphics and the integration of direct user input to actions on the screen have made this interaction system almost obsolete, but variations of this system still live in games today.

The mirror in the packaging is meant to be a physical representation of what should happen when you play a game: you become the character you play. There are no graphical representations of your character or the world, so you need to construct your own perceptions of yourself as well as the world, much like you would when you read a novel. Easier said than done when you're just imagining the world and trying to explore and solve puzzles. Some people make maps and room diagrams to help solve puzzles and help players spot clues. We see this spatial reconstruction of the rooms created by the player of the game. Interestingly enough, the player only created the first few rooms he encountered, meaning either he gave up doing it for more rooms, felt that the other material included with the game was helpful, or it was simply not included with the game we have. 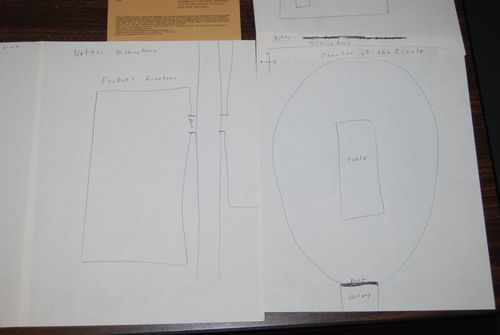 On a more nostalgic level, it makes me long for the days when video or computer games came with a lot more in the packaging than they do today. Sorcerer came in a nice big box that includes a manual, a booklet that had hints hidden and required a special marker in order to reveal the clues, a folder which can hold your handwritten paper sheets, and a spinning game reference card called an "Infolater." To top it all, the company created a fictitious magazine called Popular Enchanting.

Back at the turn of the 1990s, my family purchased Dragon Warrior III for the Nintendo Entertainment System and the game came with a huge chart that listed all the enemies and their stats, the list of magic spells in the game, the list of equipment that can be found in the game as well as where. The instruction manual did not only explain controls and hints for the games, but also had a full strategy guide. 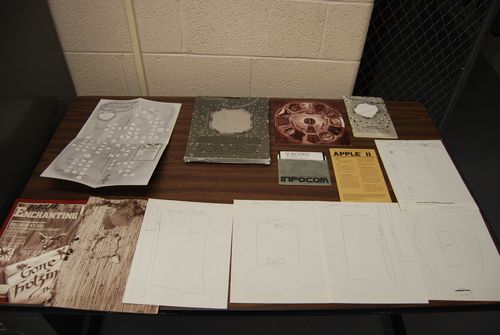 All the extra material that comes with the game and box

By contrast, my most recent physical game purchase came only with an instruction manual that was only about five pages long and told me absolutely nothing other than warnings regarding limiting playing time and a list of button commands. This reduction in packaging material comes with an evolution in game design and creating tiers of games. More games teach the mechanics of the game with extensive tutorials and scaffolding-level design that slowly builds your skills and knowledge up. In addition to game design, publishers seek to increase pre-orders or sell more expensive versions of the same game by offering the game plus extras at a higher price. My purchased game offered at least three special editions, and I opted for the regular version which got me very little other than the game.

As I look towards the future of gaming, I find myself worried from a professional and personal standpoint. As more games are released only through digital means, this becomes a problem for museums like us. How do we collect games that have only been released digitally? Even then, how do we display digital games in exhibitions? This is a challenge recently confronted by the Art of Video Games exhibition at the Smithsonian American Art Museum. We find ourselves approaching a time where perhaps all video and computer game content will only be distributed digitally. While it is understandable for many reasons, it is also lamentable. After all, I find it hard to see my reflection on a computer screen.

Drew Robarge is a museum technician in the Division of Medicine and Science of the National Museum of American History. He has also blogged about Battlestar Galactica glasses in the museum’s collection.