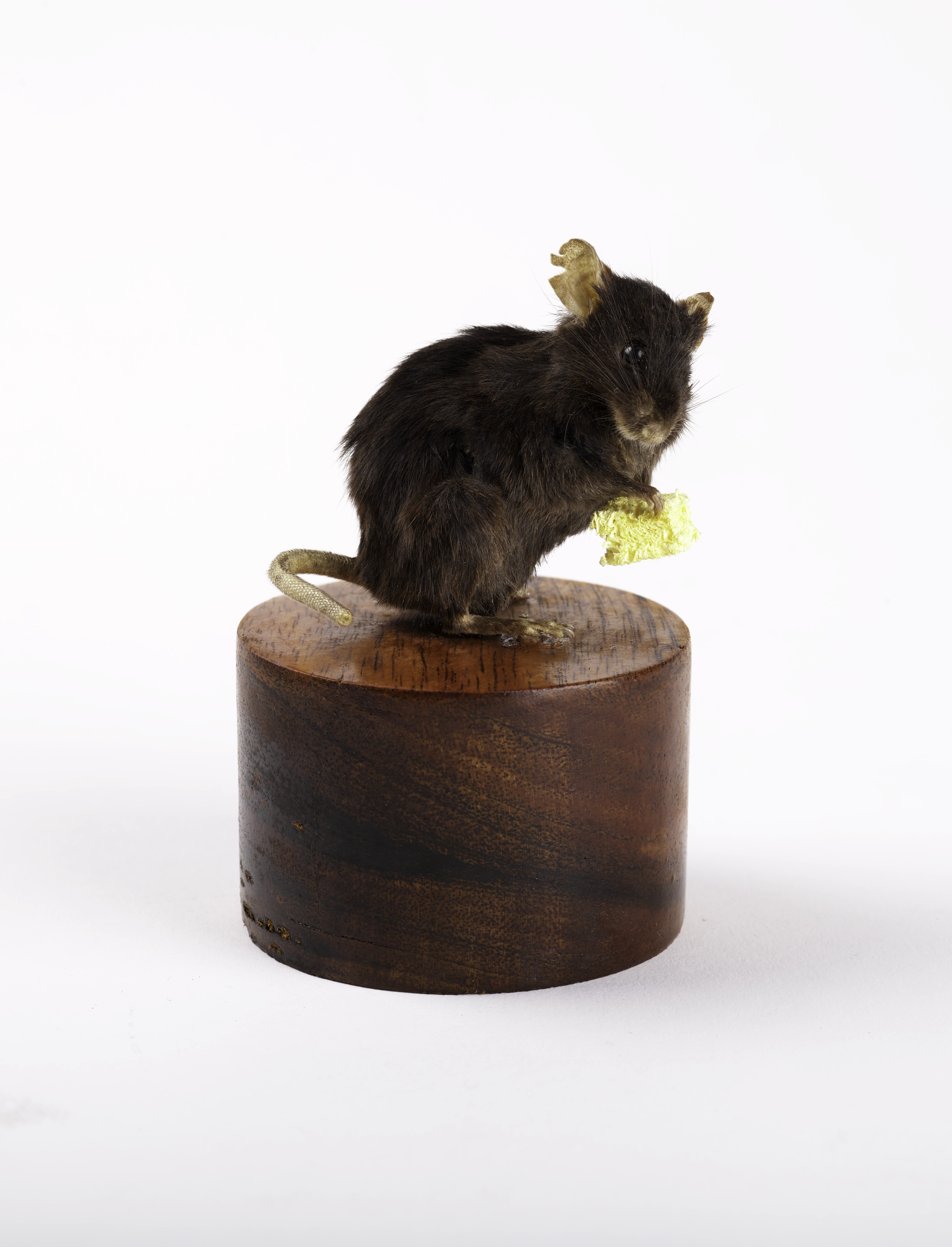 The Smithsonian’s National Museum of American History has acquired the taxidermy remains of Cumulina, the first mouse cloned from an adult somatic (non-reproductive) cell by reproductive biologists Ryuzo Yanagimachi and Teruhiko Wakayama at the University of Hawai’i in 1997. The acquisition for the museum’s Medicine and Science Division also includes a sheet of paper with footprints made by the mouse on her second birthday. The donation comes from the Institute for Biogenesis Research at the University of Hawai’i, Mānoa, founded by Yanagimachi.

Born Oct. 3, 1997, Cumulina died May 5, 2000, of natural causes. Although Cumulina is not the first mouse clone, she is recognized as the first mouse to be cloned from an adult somatic cell. Every cell in an organism other than the cells involved in reproduction are somatic cells. Each individual cell carries the information (DNA) required to make the entire individual. Depending on where the cell is in the body, the DNA is expressed in different ways. Taking a cell that is not a participant in the reproductive process and having it replicate an entire organism is what makes Cumulina special, and she was named for the cumulus cells whose nuclei were used to clone her. Cloning from somatic cells requires adult cells to revert to the embryonic stage, allowing for implantation in a surrogate mother. Cumulina’s second-birthday footprints on a piece of paper speak to the research team’s excitement about the mouse’s normal aging process.

“Cumulina is a wonderful addition to our collection,” said Curator Kristen Frederick-Frost. “This tiny mouse will help our audiences explore complex topics, from the science of making copies of organisms to the ethics of doing so. When Cumulina was born, people wondered what, or who, was next. We still wonder. She is a part of the past that pushes us to consider the possibilities of the future.”

Cumulina was created in Yanagimachi’s laboratory. Yanagimachi is a Japanese embryologist who helped lay the groundwork for in vitro fertilization in the early 1960s. In addition to his research on sexual reproduction, he is also famous for his work on cloning, which creates genetically identical organisms. His work with Cumulina made headlines in 1997, and Yanagimachi is still an active researcher at the University of Hawai’i.

While the museum is exploring future display opportunities, details about Cumulina are available on the museum’s website and in Smithsonian magazine’s National Treasures column.

Through incomparable collections, rigorous research and dynamic public outreach, the National Museum of American History seeks to empower people to create a more just and compassionate future by examining, preserving and sharing the complexity of our past. The museum, located on Constitution Avenue N.W., between 12th and 14th streets, is open daily, except Dec. 25, between 10 a.m. and 5:30 p.m. Admission is free. The doors of the museum are always open online and the virtual museum continues to expand its offerings, including online exhibitions, PK–12 educational materials and programs. The public can follow the museum on social media on Twitter, Instagram and Facebook. For more information, go to https://americanhistory.si.edu. For Smithsonian information, the public may call (202) 633-1000.